The wheels came off for Cobb suddenly and unexpectedly.

It's interesting to watch James Shields pitch against the Rays. Normally, when I'm asked if I root for the players or the laundry, I'm able to firmly answer that it's all about the laundry. I was never torn watching Warrick Dunn in Atlanta or Khabibulin in Chicago. But Shields is different. Maybe it's because Kansas City gave and the Rays received very real value for him. Maybe it's because for so many years, he wasn't just one of the better Rays, he defined what it meant to be a Ray. Whatever it is, yes I wanted the Rays to win, but when Shields pitched well, I could not help feeling a little bit happy. And anyway, the laundry is still blue and white, which is more than a little confusing to my heart.

Shields has not always been completely successful. Sometimes he's been unlucky. When he's been unlucky, it has come in the form of unnaturally high BABIPs for a pitcher of his caliber and an unnatural home run rate. I don't believe in either of these patterns, of course, but against a pitcher of Shields's caliber, they're pretty much all you can hope for. Desmond Jennings came into the game swinging; hoping to get a tasty fastball. But then he thought the pitch was low, and he tried to check his swing. He could not. But his half swing was right on the money and he made solid contact, dribbling a grounder up through the middle of the infield for a single. BABIP'd. Joyce, up next, worked the count in his favor and then crushed an over-the-plate fastball for a no-doubt home run. Homer prone.

After Ben Zobrist flew out, Evan Longoria walked, and James Loney doubled (with help from a terrible route on Jeff Francoeur's part), Shields was faced with runners at second and third with one out. He got Yunel Escobar down in the count and then put him away with a changeup that Escobar swung at least half a second in front of. Shields striking out Escobar sort of felt good. It was easy to squint and imagine the jerseys being different shades of blue. Luke Scott was up next, in his first at bat off of the disabled list. Shields put him up in the count 3-0 before needing a close call for strike one. He then got Scott to swing over a changeup down and in and put him away with another change. He walked off the field with his head down and a familiar disgusted, determined grimace on his face. Once again, it was easy to squint a bit, picture Scott in orange, and admire Shield's fortitude in getting out of the jam.

The first at bat of the game for Alex Cobb against Alex Gordon provides about the most perfect scouting report one could ask for from Cobb. Strike one called on a low fastball. Strike two called on a big curve. Strike three swinging on a darting split-change. Just to complete the report, Cobb got Alcides Escobar to ground out in the next at bat.

In the top of the third inning, Jennings struck out on a high frontdoor cutter. It wasn't a very good pitch, and it was in exactly the type of area DJ likes (up and in), but he must have been looking for something else, as his swing was half-hearted. Two at bats in, Jennings might have gotten a hit and scored a run, but he also was made to look silly both times.

With one out in the bottom of the second inning, Mike Moustakas golfed a low splitter practically off the plate and into short center field for a single. Cobb was up to the challenge, though he struck Francoeur out looking on a two-seam fastball that came back over the plate to just barely catch the edge. The call had Frenchy complaining, but it was right, and does anyone ever really believe that Francoeur knows the strike zone? Salvador grounded a single through the middle, but the Rays continued to get the better of their 2012 reunion tour for the time being, as Elliot Johnson flew out harmlessly to short left field.

EJ, however, would get the Royals next hit off of Cobb in the fifth inning, stroking an opposite field line drive, would steal second without a throw (Molina couldn't get the ball out of his glove), and then advanced to third when Molina failed to smother a curve ball in the dirt. Cobb shut the door, though, by striking out Gordon swinging on a 3-2 changeup.

Cobb continued to control the game, at one point generating six soft groundball outs in a row. He looked to be cruising until, with two outs in the bottom of the sixth inning, Eric Hosmer drove a low first pitch curve the other way to the wall for a stand up double. Lorenzo Cain lined a single off of another breaking ball, and then Cobb presented Mike Moustakas with a mistake. It was a splitter that didn't split, but instead hung out over the heart of the plate until Moustakas suggested that it split, after which it hung out over the right field wall.

Next, Francoeur hit the first pitch he saw hard for a double of his own, bringing Jim Hickey out of the dugout. Whatever Hickey said didn't work, as the first pitch was a bad ball, and the second pitch was a curve with little bite that Salvador Perez reached down and flipped into the left field alley to score Francoeur. Not even Elliot Johnson could kill the rally. He lined a 1-2 pitch into center field for a single and chased Cobb from the game at only 88 pitches. Jamey Wright shattered Gordon's bat to end the inning.

James Shields could the finish line. We Rays fans know the look. Once Shields has just a few more outs to get, he empties the tank, uses every trick he has. He throws harder than he otherwise might, but he also pitches backward more than he otherwise might. Usually, he finishes strong, and tonight was no difference. Shields struck out Scott and Ryan Roberts, and drew a soft grounder from Jose Molina to close his stat line at seven innings pitched, two earned runs, five hits, one walked, and seven strikeouts. For most of the game, it seemed as if Cobb was having the better outing but his final line is 5.2 innings pitched four earned runs, ten hits, no walks, and five strikeouts.

Brandon Gomes come out to pitch the seventh inning. He's been really good this season so far, and he looked it to start the inning. He gave up a single to Alcides Escobar, but then added Billy Butler to his list of top opposing batters he's struck out in dominating fashion before Maddon ordered an intentional walk to the lefty Hosmer. Lorenzo Cain hit a popup into short right field, that should have been Ryan Roberts's ball, but Roberts played it poorly. By the time it was clear that he didn't have it, there was no chance for the onrushing Jennings or Zobrist to make a play, and the ball fell for a single between the three of them. Jennings picked it up and threw to third, which was another (admittedly minor) mistake, as he was standing only about 10 feet from second base and might have had a play on Hosmer there. A well hit ball from Moustakas to right field sacrificed in one run. Cain then stole second base, and Jose Molina threw the ball into center field to plate another run. Francoeur hit an outside pitch to the wall for a triple that would score another before Gomes managed to strike out Perez on three pitches to finally escape the inning. It was an ugly relief outing, maybe more so for the Rays defense than it was for the young reliever.

Cesar Ramos was not really any better (he way okay), but by this point, nothing he did mattered. The Rays mounted a mini rally in the ninth inning when James Loney hit a single, and then Yunel Escobar knocked a fliner into the gap. He tried to stretch his hit into a double against Alex Gordon's arm (best throwing left fielder in baseball) and down by six runs. That is the definition of a stupid play. He was thrown out, and he deserved to be. Please never do that again, and don't argue with the umpire when he calls you out. You shouldn't be anywhere near second. 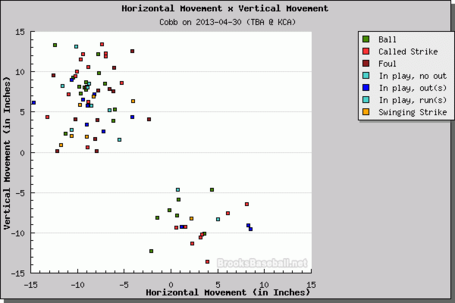 That's somewhere around 15 pitches at or above the -10 inch mark, many of them four-seamers (which usually have less horizontal movement than two-seamers). It really was a live fastball day for Cobb, and for most of the game, it worked great.