Chris Davis is not human, Evan Longoria is.

Chris Davis continued his hot hitting, blasting a two-run homer in the second inning on what gameday thought to be a pretty good changeup down and away on the edge of the zone. Then he doubled in two more in the sixth off an even better placed sinker right on the bottom outside corner. Overall, Roberto Hernandez was solid, pitching into the seventh inning and striking out seven, but he had no answers for Davis. J.J. Hardy added a two out homer against Cesar Ramos in the eighth to pad the lead.

The Rays scored their first couple runs on 4 singles in the fifth inning against Gonzalez. Then, in the bottom of the ninth inning, things got weird. The Rays got a rally going with two men on, no outs, and Longoria on. Longoria hit a double, but apparently passed Zobrist on the base paths, while Zobrist was waiting to see if it was caught, leading to himself being called out, and effectively killing the rally. Three batters later, game over. 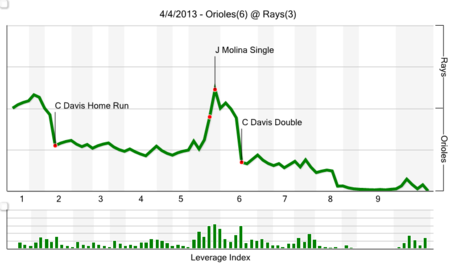