The Rays Tank: Moore Settles Down Nicely In 4-0 Win Over Indians

The Rays pitching staff combined to throw a two-hit shutout in the team's 4-0 victory over the Cleveland Indians. Jake McGee recovers from a horrendous Opening Day appearance.

Share All sharing options for: The Rays Tank: Moore Settles Down Nicely In 4-0 Win Over Indians

Matt Moore and the Rays bullpen were simply dominant in last night's 4-0 victory over the Cleveland Indians. Moore allowed only two hits and two walks, collecting eight K’s over six innings. The bullpen stepped in and picked up where Moore left off, not allowing anyone from Cleveland to reach base. In fact, the Rays pitching staff retired the last 17 batters of the game.

@RaysJoeMaddon tweeted, "When Matt’s fastball is a strike, all of his other pitches come alive. That was the case tonight." 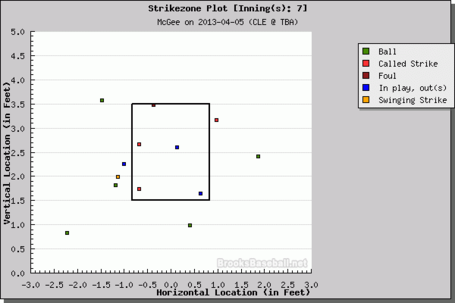 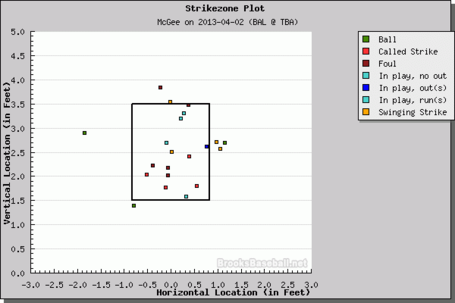 So maybe McGee just had opening day jitters, but he definitely seemed more comfortable exploring the strikezone last night. During his post-game press conference, Joe Maddon told reporters that Jake "threw more cutters, which could get the hitters off of his fastball a bit."

Brandon Gomes was also impressive in his first appearance after being recalled from Triple-AAA Durham earlier in the day when Niemann was placed on the DL. Gomes threw a perfect ten-pitch eighth inning. He talked with reporters before the game about how he expected to be called up this season, but not after only three games. Video courtesy of Roger Mooney, Tampa Tribune.

For a more detailed recap of the game, you can check out Ian’s post here!

Tonight we'll see Alex Cobb take the mound against Travis Bauer of the Cleveland Indians. The first 20,000 fans at the game will get a David Price Cy Young figurine, and there will also be a pre-game ceremony for Price where he will be presented with Clarence in front of the fans.

The Rays will also have another special guest at the game tomorrow according to this picture posted on their Facebook page!

In Other MLB News...

Josh Hamilton was greeted with "boos" today in his return to Rangers Ballpark in Arlington. He was 0-for-4 with 2 K's on the day as the Angels fell to the Rangers 3-2.

Wrigley Field may be getting a facelift in the very near future. The deal is expected to be completed by Monday and rooftop owners around Wrigley are already threatening to sue if any of these renovations obstruct their view. I just hope Andre Dawson isn't still lost in the ivy when renovations start!

In the Orioles home opener, Chris Davis continued his hot streak, hitting a grand-slam and driving in five runs, bringing his total to 16 RBI's on the season. Per the Elias Sports Bureau, Davis' 16 RBI's are the most of any player through the first four games of the season in MLB History. In 2012, Davis was 4-for-15 with 1 RBI in the first 4 games of the season.

Per Elias Sports Bureau, the Houston Astros are the first team in MLB History to strike out 13 or more times in each of the first four games of a season. At least Carlos Pena has something to bond over with his new teammates.

Mark Texiera tells reporters that he is 8-10 weeks from returning to action for the New York Yankees. While the Yanks hope to get Derek Jeter back by May 1st, Joe Girardi stated yesterday that Jeter may need to take part in extended spring training before rejoining the team.

Want to hear David Price scream like a girl? Video was posted last night of the Rays visit to the paintball arena from their off-day during Spring Training.

A minor-league field is being transformed into an apartment complex in Indianapolis, where rent will be as low as $599 a month. Talk about an awesome neighborhood!

This girl freaks out entirely way too much over a foul ball caught by her boyfriend.