The Rays have allowed no runs over the past two games.

Trevor Bauer was wild, walking seven batters in five innings, yet somehow only giving up three runs. Still, the Rays did score in four separate innings, and looked dangerous all game. Cobb pitched seven and a third, allowing only seven runners to reach base (four singles and three walks) and striking out six.

There was some excitement in the eighth inning when Cody Allen threw a fastball behind Evan Longoria that ended up hitting him in the butt. It sure looked intentional, and both dugouts were warned, but didn't make a whole lot of sense. Desmond Jennings had taken out the Indians' catcher Lou Marson on a clean play at the plate, and Yunel Escobar had signaled himself safe at second, after which the umpire had questionably concurred, but there was no reason for the Indians to be upset at Longo. Allen was later on in the inning, so I think it's safe to say that it was just a bad pitch. 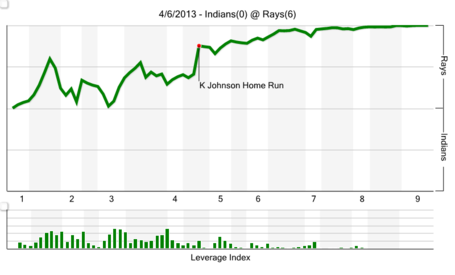 Full recap will be up later tonight.