Share All sharing options for: Alex Cobb's Change Up

Alex Cobb, firmly entrenched as the Rays' fourth starter, pitches fifth in the rotation and made his season debut on Saturday against Trevor Bauer. Two years from now Bauer may earn a marquee match-up, but with only two seasons in the minors and majors under his belt, Cobb was easily superior this weekend. And it was a unique outing.

When Cobb was promoted last season he was recovering from Thoracic Outlet Syndrome, which had required surgery in August of 2011. He was called to the majors sooner than expected when Jeff Niemann went down with a broken leg in May of last season, and as Kinsella noted in his season preview, Cobb recovered his command and made the necessary adjustments along the way, going 7-1 with a 3.09 ERA over his last 11 starts.

Like many Rays before him, Cobb is a change-up pitcher, and a heavy one at that. After his promotion Cobb was leaning on the off-speed pitch nearly 45% of the time, with a two-seamer/sinker as his secondary offering (30%). His 90 mph four-seam fastball was used sparingly (15%), as it curiously has the same speed as his sinker, but with three inches less movement.

As the season carried on, Cobb gained nearly two mph on both fastballs and even more movement on both offerings, allowing him to use the change-up less often. If he'd qualified for a full season of pitches, Cobb would have led the majors in change-up use (33% at season's end), besting even James Shields (29%).

In his approach, Cobb is most likely to start a righty the hammer, welcoming the batter with a curveball and then mixing his fastballs and change-up early in the count. If the batter stretches his plate appearance, Cobb will use the change-up more and more, using it as his go-to out pitch on two strikes. Against lefties Cobb shifts from his four-seam to the two-seam approach to work in on the hitters, leaning on the sinker to start the at-bat, and still using the change-up late in the plate appearance and on two strikes.

Against the Indians, Cobb did everything pretty much the opposite.

The curveball was used on first pitch strongly against lefties, but not once to start righties. Cobb used his fastball exclusively in that scenario. Cobb only used the curve against RHH once he was ahead in the count, which is enough to double take, but things got stranger. If either handed batter got ahead in the count, Cobb pumped his sinker, and used it as his out pitch. The change-up was all but absent, used less the 20% overall. He worked the four-seam fastball hard against righties to push them through the count.

Here's what that effect has on his pitch percentages: The graph comes from Brooks Baseball, which for some reason has Cobb's change-up labeled as a splitter (FS). For the rest of the key, four-seam = FA, two-seam/sinker = SI, and curveball = CU. 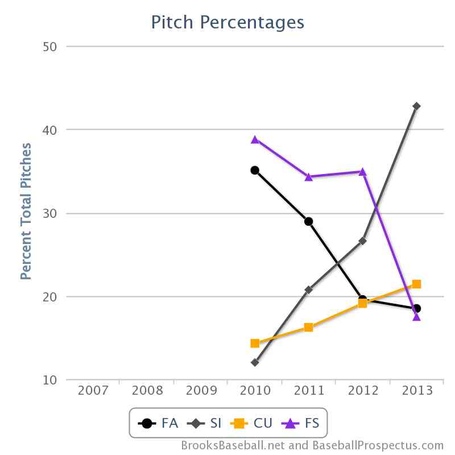 Keep in mind this is only the first start of the season, which begs the question whether this strange distribution was all Cobb, or simply his process against the Indians. As a team, the Indians have seen league average pitch concentrations of 57.5% fastball, 29.5% breaking ball, and 11% change-up, so at first glance Cobb's approach appears more unique to his skill set than his process against Cleveland.

By comparison the Rays starters had the following pitch selection breakdowns for the series, by my observation:

*Straight, in this case, meaning non-breaking.

Moore's two-seam fastball is included here as non-breaking because it has nearly identical movement to his four-seam fastball. Considering the two-seamer in the same category as Cobb and Price yields a 55% breaking ball selection for Moore, and shows a uniform process for all three starters against the Indians.

Moore and Cobb led the Rays to shut-out victories in their starts, while Price had the opposite effect. Pitch selection is not an end-all-be-all process against teams, but it sheds light on Cobb's approach nonetheless.