Rays vs. Rangers, game one: Umpire worse than Hellickson

And no, Hellickson was not very good.

Share All sharing options for: Rays vs. Rangers, game one: Umpire worse than Hellickson

Game one in Arlington began well for the Rays. Ian Kinsler lead off the Rangers half of the first inning with a nine pitch walk, but Jeremy Hellickson was able to strike Elvis Andrus out looking on six pitches. With Lance Berkman up in a 2-1 count, Kinsler broke for second. The pitch was a strike, and either Jose Molina got the ball out of his mitt so fast, or Kinsler's break was so bad, that Kinsler ended up caught in a rundown between first and second. The auspicious start would not last, however, as Hellickson quickly walked Berkman to replace the runner on first.

Next, Adrian Beltre flared a fly ball into left field, and Sam Fuld read it poorly. He compounded his mistake by trying and failing to make a diving catch. The ball squirted past him and Berkman was able to score from first to take a Rangers lead.

The second inning started well enough, when Evan Longoria walked on five pitches, and Matt Joyce lined a single past Kinsler at second to put two men on with no outs. Yunel Escobar hit a grounder that should have been turned into a 6-4-3 double play, but Kinsler's throw to first was in the dirt and Mitch Moreland was unable to scoop it. The ball glanced off Moreland's mitt and far enough toward the dugout for Longoria to score and Escobar to advance to second. Loney worked a full count and then appeared to crush a slider. When you have first basemen that hits (and fields) like a middle infielder, though, loud contact does not always mean runs, and Nelson Cruz made possibly the best defensive play of his life, hauling the ball in over his shoulder with a leaping stretch at the wall.

Hellickson avoided any further damage, but the Rangers were patient and he wasn't efficient. By the end of the third inning, Hellickson had thrown 72 pitches. Maybe he entered the fourth inning with the intention of really making sure to throw strikes. If that was the plan, it didn't work out. David Murphy started out the inning with a scorched line drive to straight away center that Desmond Jennings played beautifully, coming in with no hesitation on his read whatsoever to make a sliding catch. Nelson Cruz nearly replicated Murphy's at bat, although his was slightly less well hit. Jennings took care of it as well. A.J. Pierzynski would do better, however. Earlier in the game, Hellickson had been trying to bust Pierzynski inside, and when he did so again, Pierzynski was all over it, turning on a belt high inside fastball and sending it out over the right field wall. Two pitches later, Mitch Moreland homered as well, sending another belt high fastball (this time on the outer edge) 400+ feet out to right center. Even Craig Gentry got in on the "hard hitting action," but Fuld was able to track down his fly ball on the warning track.

Later on in the game, the Rangers tacked on a couple more runs (that would prove important) against Cesar Ramos and Kyle Farnsworth, but those were more a matter of balls finding the holes in the infield than anything being really well tagged.

So, what was up with Hellickson? Well, he was nibbling a bit, as is is his wont, but he was also more fastball heavy than usual. Of his 98 pitches, 24 were changeups, and only eight were curves. It's particularly perplexing, since when he did throw his curve the results were good: five strikes including two weak ground balls. On one of those groundball outs, I saw Hellickson shake off Molina at least four times before getting to the curve. If the plan was to go predominantly fastball/change, here's hoping the Rays scrap that plan.

Of course, conversation will be dominated by the events of the ninth inning. After Joe Ortiz supplied some excellent relief work in the sixth and seventh inning, fellow lefty Michael Kirkman came on in the eighth inning with a four run lead. A walk from Jennings and singles from Zobrist and Longoria loaded the bases for Matt Joyce, but Joe Maddon sent in Shelly Duncan to pinch hit. Ron Washington immediately pulled Kirkman for the righty Derek Lowe, who had been rushing to warm up in the bullpen. It was a bad move because (a) Duncan has no split, and (b) Lowe was probably not warmed up yet. He walked Duncanon four pitches to give the Rays a run. Lowe then got Yunel Escobar to hit the ball on the ground, although a good slide by Duncan prevented the Rangers from even attempting the double play. Lowe retired Ryan Roberts to end the threat and set up the ninth inning dramatics.

Joe Nathan, one of the greatest closers of his generation, came on to pitch the ninth in a two run lead. He promptly put Jose Molina down in the count 0-2, the way pitchers like Nathan (great, right handed) often do with hitters like Molina (poor, right handed). But then strange things started happening. Molina took a ball, and then lined a fastball right back up the middle for a single. The Rangers did not hold him on, so Molina strolled out the first baseman and then took off, stealing second. It was good he did, too, since Kelly Johnson popped out in foul territory, and then Jennings hit into what would have surely been an inning ending double play had Molina still been on first base.

This put the Rays in an interesting situation. With two outs, Sean Rodriguez (who had previously pinch hit for Fuld against a lefty) needed to get on base to bring the Rays' big guns in Zobrist and Longoria to the plate. Against the righty Nathan, that didn't seem very likely. But Rodriguez took five pitches, three balls and two strikes, and when the third pitch was a curve ball over the heart of the plate, he didn't hesitate, sending it out into short center and cutting the lead to one.

This is what baseball is all about. Tension and release. A great closer on the mound, the tying run at the plate in the form of a team's three hitter, and their four hitter waiting in the on deck circle. Facets of the game that usually seem boring and slow become thrilling. The pitcher throws over to first, as the runner tries to take an extra foot. The pitcher makes the batter wait and the batter steps out of the box. The fans are made to wait, and they like it. At it's best, baseball doesn't let a fan breath.

Zorilla was hunting his pitch. There are times when he hulks in the batter's box, the bat resting easily above his shoulder but looking heavy and foreboding. At these times, it's easy to picture Zobrist's level swing traveling to meet a mistake and sending it on a line to or over the rightfield wall. In this at bat he had the look, but Nathan wasn't making any mistakes. He stayed away, right over the edge of the plate, and Ben was content to wait. He waited the count full, and then when the sixth pitch was a curve ball low and away, that Pierzynski caught with his glove nearly on the ground, he took his walk. 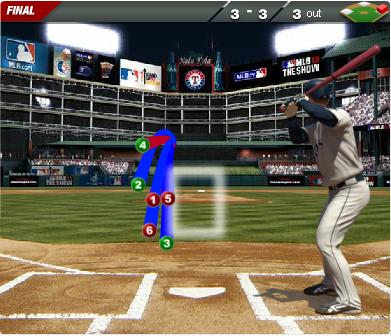 Only the umpire didn't let him.

It's the square red square in the bottom left. That was how the game ended.

That can't happen in a major league game.