Who will return to form and who will falter?

Last year, the Rays fielded one of the best bullpens in recent history. Fernando Rodney set the ERA record, Jake McGee posted the lowest FIP in Rays history (1.81), Wade Davis' seamlessly transitioned to his new role, and Joel Peralta was his normal reliable self. Altogether, the bullpen compiled a 2.88 ERA, struck out over a batter per inning, and walked less than three per nine innings.

Heading into this season, we knew we should manage our expectations. Bullpens are volatile, and even a bullpen with a solid core of relievers can implode on a moment's notice. For instance, the shape of the bullpen right before the start of the 2012 season was a mess. The closer, Kyle Farnsworth, went down with an injury, Jake McGee struggled the year before, Wade Davis was new to relieving, and Fernando Rodney was a complete reclamation project. It turned out pretty well. Meanwhile, a 2009 bullpen straddled with high expectations failed miserably.

However, this year's bullpen has far under performed even the most conservative projections. According to fWAR, the Rays bullpen has pitched below replacement level this year, costing the team .1 wins. Overall, the ERA/FIP for the bullpen is sitting at 4.26/4.24.* The majority of the blame can be placed in the hands of Kyle Farnsworth, Jake McGee, and Fernando Rodney. Here are my thoughts on their seasons so far:

*Stats are through Monday, so it does not account for the bullpen's disastrous Tuesday.

Kyle Farnsworth re-signed with the Rays this off-season despite interest from several other clubs. The Rays closer in 2011, Farnsworth earned the reputation of a reliable reliever from 2009-2011 thanks to the increased usage of his cutter. Once strictly a flamethrower, Farnsworth learned to mix in offspeed pitches, giving hitters a look that differed a steady diet of his heavy fastball.

Even with the addition of his cutter, Farnsworth depended on his fastball/sinker, which averaged around 94-96 mph. He would pitch off of it, maximizing the effectiveness of his cutter and slider. The cutter would come in at hitters like a fastball, but break away at the last moment. Batters would expect 96, only to see an 89 mph offering break on them before they had the chance to adjust.

Last year, Farnsworth's velocity dipped a tick or two, most likely due to his elbow issues. Even though his ERA and FIP regressed, he still found success and missed bats; his main issue was his control (4.67 BB/9).

This year, fans hoped a healthy Farnsworth would provide stability in the back of the bullpen. Instead, Farnsworth has been a mess. In 5.1 innings this year, he has an 8.44 ERA. He has yet to retire a batter on strikes while giving three batters a free pass to first base. Given his success over the past four years, it seems logical to assume he will bounce back. However, a deeper look reveals plenty of concerns.

His fastball velocity so far this year has averaged around 92 mph, while his sinker has hovered at the 90 mph mark. A recent history of elbow injuries and his increasing age both suggest that the velocity may be gone. His peak fastball velocity this year is only 94.97, a far cry from the triple digits he once touched.

The lack of velocity would not be such an issue if it were not for his struggles. For his career, batters have come up empty on about 22.27% of their swings at his fastball. This year, that rate is a dismal zero; batters have yet to whiff at is fastball. Additionally, the whiff/swing rates on his cutter and his slider are both significantly down, each at least 12% lower than their career figures.

Based on his prior productivity, Farnsworth deserves a longer look to see if his velocity can creep back up closer to its normal range. If his velocity is still absent around a month from now, he is a strong release candidate.

There tends to be a familiar pattern of fan reactions when Jake McGee pitches. When he is doing well, fans tend to laud him for his overpowering stuff. When things go bad, they tend to blame it on his lack of an off-speed pitch. I think the blame is a little misplaced. As last year taught us, McGee doesn't need a quality off-speed pitch to succeed. As I showed earlier this year, his fastball is one of the best in the major leagues. But when you lack a quality secondary offering to fall back on, the margin for error is smaller. Batters know a fastball is coming, so command, movement around the zone, and throwing quality strikes is imperative.

McGee's struggles so far boil down to one thing: fastball command. Last year, when McGee absolutely dominated hitters, he moved his fastball around the zone and threw strikes when he needed to. This resulted in lots of strike-outs and few walks.

When a one pitch pitcher gets behind in the count, the batter will have a huge advantage. That has been Jake's problem this year. Last year, McGee threw the ball in the zone 53.5% of the time. This year, he has hit the zone only 46.3% of the time. The percentage of times batters are swinging has dropped from 54.4% to 46.9%. Batter's aren't making more contact with his pitches in the zone; moreover, all of his contact stats are similar to last year. With two strikes last year, batter's put the ball in play 20.77% of the time. This year, they are putting it in play 19.35% of the time. It is true that batters are fouling off instead of whiffing at pitches more often with two strikes this year, but the difference is not drastic.

Consider this: batters had 78 ABs against McGee last year in a two or three ball count. Of those at bats, 22% resulted in hits. This year, McGee has had 13 ABs in two or three ball counts. Batters are getting hits off of him 23% of the time in those situations. When you fall behind in the count, you are going to struggle. In order for McGee to succeed, he needs to command his fastball. When he does that, the walks will go down and (hopefully) the hits will follow suit.

Of the three relievers, Rodney is in the most unique situation. He isn't a young, emerging reliever like McGee nor i she an older, proven pitcher on the decline like Farnsworth. Instead, he is a complete enigma, a reliever whose Achilles heel was bouts of wildness yet mysteriously found command in a Rays uniform, where success was quick to follow. No sane person expected a repeat of last year's record setting 0.60 ERA nor his 1.81 BB/9. Most expected a solid year from him, one that would cement his status as a valuable reliever yet fall short of elite closer territory.

Things have not gone according to plan so far. Rodney is walking batters left and right, he is blowing games, and balls in play are more often than not in the air. This has caused many fans to say things such as "Rodney allowed five earned runs last year, yet has already allowed four this year." Therein lies the problem. It is not fair to compare this Rodney to the 2013 Rodney. The 2012 Rodney that is in the record books will never again take the mound. Instead, we should compare Rodney to the pre-2012 version and hope that he pitches above those standards. 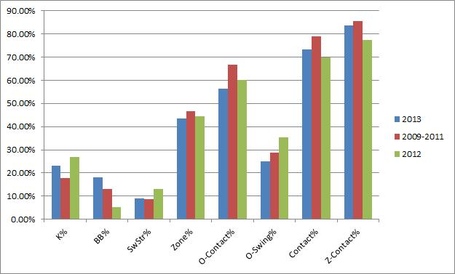 As the chart shows, Rodney excelled in every category in 2012. Unfortunately, it looks like Rodney has reverted to his 2009-2011 form in many of the areas. While his contact% is down (good), batter's are swinging at less pitches outside of the zone (bad). His zone contact percentage is very similar to 2009-2011's.

It is still early, but his showing so far has been discouraging. On top of a mediocre process, the results have been downright ugly. Giving up an exuberant amount of line drives and walking far too many batters is certainly not commendable.

If I had to offer my opinion on how each would fare going forward, I would predict that Farnsworth will continue to struggle and be replaced by Josh Lueke, McGee will rebound, and Rodney will be closer to his 2009-2011 form than his 2012 form, causing him to fall in the pecking order. But that is just one man's opinion, so take it with a grain pound of salt. Bullpen's are fickle, and unfortunately for the Rays, it looks like this year's pen may be quite a bit worse than last year's.