The Rays Tank: Plantain Power and a Walk-off Walk

Price goes eight innings, the bullpen didn't allow any runs, and the Rays win on a walk.

Share All sharing options for: The Rays Tank: Plantain Power and a Walk-off Walk

Once behind in the count 0-2, Luke Scott fought back and took a walk with bases loaded and two outs in the bottom of the tenth inning to bring Evan Longoria home. The Rays defeated the Blue Jays 5-4 on a literal walk-off and split the series 2-to-2.

Last night’s victory brought the Rays to within 4.5 games of the Boston Red Sox and Baltimore Orioles, who currently lead the AL East with a record of 21-14. This is the closest the Rays have been in over two weeks since they were four games behind on April 24th.

It was another no-decision for David Price, who has not won at Tropicana Field since July 19, 2012 against Cleveland. Price went eight innings tonight, striking out eight while giving up seven hits, four earned runs and walking one batter. Three of the four earned runs came with two outs. This season, 22 of Price’s 33 runs given up have come on two outs, per the Rays post-game notes. During Price’s post-game press conference, he told reporters,

Fernando Rodney’s plantain made its return from the World Baseball Classic, as did Rodney’s 100 MPH heater. Rodney threw a 17 pitch ninth inning which featured nine fastballs (six for strikes and averaging 99 MPH) and eight changeups (six for strikes, three swinging). His strikeout of Colby Rasmus to start the ninth was perfect, setting him up with fastballs and then finishing him with a beautiful changeup. It was very reminiscent of Rodney’s 2012 performances. 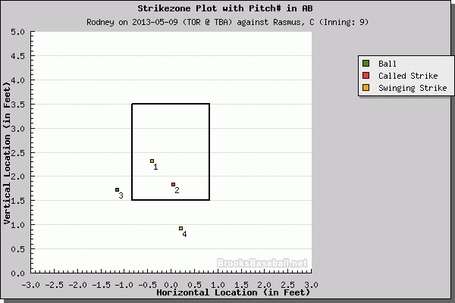 Fast forward to the bottom of the tenth, the Rays are quickly at two outs after Kelly Johnson grounded out and Ben Zobrist had a fly-out to center. Longo comes to the plate and doubles which brings James Loney to the plate. Going into last nights game, Loney led the AL with a .385 batting average. So of course, the Blue Jays intentionally walked him, the 46th intentional walk of Loney’s career, but only the third against a left-handed pitcher, per post-game notes.

Blue Jays Manager, John Gibbons, told reporters after the game why they avoided the lefty on lefty matchup, "Loney’s been on fire. He’s been one of the hottest hitters in the game the last month. Robert’s a guy we can get, but we walked him."

Ryan Roberts did indeed walk to load the bases for Luke Scott. Since returning from the DL, Luke is 8-for-23 with 7 RBI’s. The walkoff-walk was the first of Scott’s career.

For a more in-depth recap, check out Ian’s article here.

Alex Cobb takes the mound against Edinson Volquez at 7:10 tonight as the San Diego Padres come to the Trop for a three game series.

-The Angels and Astros game was being played under protest last night, and you can kind of thank Joe Maddon for that. The "Sam Fuld" rule was added to the MLB Official Rule book in the beginning of 2012, a season after Maddon put Sam Fuld on the mound to warm up in a game where the Rays were up 8-1. Before he threw any pitches, Maddon yanked Fuld and brought in an actual relief pitcher. And now we have rule 3.05. Last night while up 5-3 in the seventh inning, the Astros brought in one relief pitcher and once the batter in the Angels on-deck circle was substituted, Bo Porter called for a different pitcher from the bullpen. Mike Scoscia immediately came out and argued with the umpires unsuccessfully which led to him informing the umpires that they’d be playing under protest. The Angels went on to win 6-5.

-Over at Baseball Prospectus, Jason Collette took a look at Fernando Rodney’s mechanical changes this season. While watching last nights game, Rodney’s foot tap was definitely evident. I noticed that he would tap it between one to three times before throwing each pitch.

-Zack Greinke is slated to return to action tonight, making his first start since injuring his collarbone in an on-field scuffle with Padres’ Carlos Quentin on April 11. He will pitch for the Dodgers’ Class-A Advanced Rancho Cucamonga less than a month after having surgery on his collarbone.

-Did you celebrate stats yesterday? Apparently May 9th is "Adequate Sample Size Day", so now all of your opinions can be justified with stats and no one can tell you it’s too early in the season.

-J. A. Happ will miss four to six weeks while recovering from injuries sustained after getting hit in the head with the line drive in Tuesday's game. It looks like he'll be staying here in Dunedin and rehabbing with the Blue Jays class-A team, as doctors have advised him not to fly yet.

-The Indians' players and team President are giving out free tickets on Twitter after two of their recent home games had less than 10,000 fans in attendance.

-MLB says that "perfection is an impossible standard" in regards to the Umpires and their missed calls this season.

-We'll end this tank with some laughs. Here is an absolutely pathetic first pitch during the Stetson/Florida State baseball game the other night.