Every gem has its blemish, and this weekend's sweep of the Padres had its own.

The weekend sweep of the Padres was delightful and featured much of the top line pitching and stellar defense Rays fans have become accustomed to, except on very bad inning:

This inning nearly cost the Rays a crucial game,one that would return the team to .500 for the first time since the first week of the season, and would inspire hopes of the post season in May once more. If not for Evan Longoria going yard in the ninth for a two run blast, a seventh inning, four run lead would have been tarnished.

Let's break down exactly what went wrong, and try to isolate who's to blame and what could have done better: 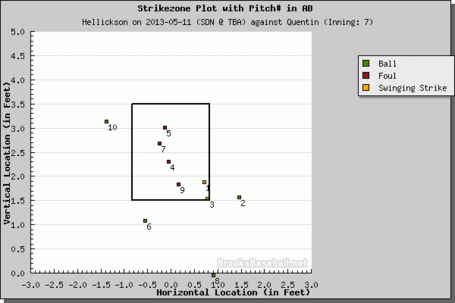 In his first at bat, Carlos Quentin had flown out to left field after making contact on a curve ball just outside the strike zone; his next appearance in the fourth was a four pitch strikeout, featuring a foul ball and two swinging at change ups down and in (link). By the seventh inning Hellickson might've had some swagger, but Quentin would not be fooled again.

Hellickson started Quentin on a change up for his third whiff on the pitch that Saturday. Pitches 2, 6, and 9 were heaters at 90 MPH, but Hellickson had confidence in his change ups. He pitched inside with a fastball to no avail, and then missed the call on another change up on pitch three. Quentin is watching, and he's getting the timing down.

The next three change ups are down the middle, while pitches six and eight miss badly. Then a fastball at pitch nine is also fouled off. So Hellickson tried something new on Quentin, just inside -- a pitch that had fallen for strikes plenty against lefties all night. No such luck against the right handed Quentin.

Lobaton didn't set up his glove where the pitch will be so it's hard to tell if Hellboy missed his spot, but the decision to go inside was a mistake. Quentin took the walk, in spite of what looked like a close pitch at the time. 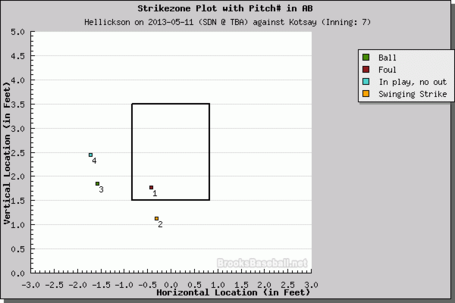 Here's the part where I call Mark Kotsay underrated.

Last season Kotsay made 80% contact on pitches he swung at outside the zone, while swinging 30% of the time. This season he's been even more selective, but just as effective. You miss just outside, and he can punish.

Inside the zone he's not an easy guy to pitch to, either. With the limited sample size of 156 PA's last season, Kotsay was swinging pretty much all the time with an overall contact rate of 86%:

Choosing the outside edge isn't a terrible choice if you're throwing heat, which is Kotsay's biggest weakness. He can reach out and smack that ball outside the zone, but normally falters if it's blown by. Unfortunately, Hellickson does not have that stuff.

If you're not worried yet, this is Kotsay's career heat map against offspeed pitches:

A change up middle or down and away was not a brilliant decision. Hellickson tried his fastball there once and was lucky. Testing his luck twice, Kotsay made contact.

By this point Hellickson has racked up two strikouts in the inning. In spite of some interesting pitch placement in the inning, he K'd a swinging Gyorko. That was pitch 100.

Here's where the baseball gods were unkind. Following a swinging strike and a foul ball, Amarista checked his swing and made contact off the bat on the third pitch. A swing he didn't even follow through.

Here's a few screenshots for context: 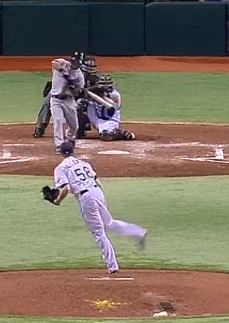 Hellickson placed the pitch well enough on the inside edge of the zone. If the swing misses -- or if Amarista never swings, like he wanted -- you've got the third out. Instead it was a slow dribbler through the grass toward third base more than anything, and Longo didn't stand a chance.

Longoria was playing near third base before he started the run due to the man on base at second, yet he still managed a close play. 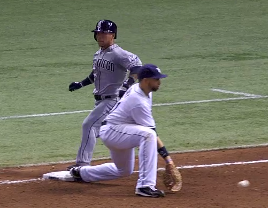 Hellickson stayed in the game and fed Guzman a steady diet of six change ups, ranging between 78.5 and 80 MPH, with the final one after a 3-2 count and in the portion of the strike zone labeled down-the-freaking-middle. 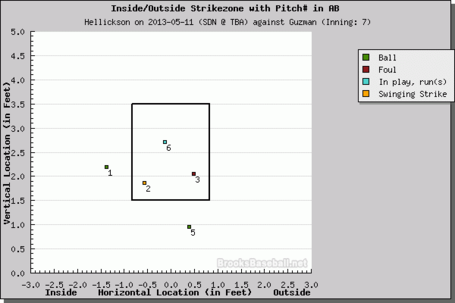 In my opinion, the mistake wasn't allowing Hellboy to try and finish the inning if nothing had changed. Hellickson was a fine matchup against the .115 batting catcher John Baker, but when Jesus Guzman stepped up to the plate, there was a new decision to be made.

What would be the granslam allowed to Guzman was only pitch 110, but the series of change ups were losing velocity and it seemed like Hellickson was fighting to keep them in the zone for over 20 pitches -- as seen in pitches 6, 8, and 10 against Carlos Quentin, and when he allowed the "single" to Amarista the previous batter.

What's worse, Jamey Wright -- our resident wormburner -- was nearly warm in the pen, and Guzman has a distinct weakness against groundball specialists (career 42 wRC+ when hitting into a groundball). Hickey had made the call to the bullpen after Mark Kotsay's single.

I do not see a strong reason why he would have matched better against Guzman than Wright.

Instead of facing the ninth batter in the order against the Padres, Wright had the privileged of facing the top of the order and allowed one run in his own mess (error by Zobrist, HBP, walk, walk). If the dugout had lifted Hellickson a batter early, the Rays might have escaped with no runs allowed. Instead there were five and a lost lead.