Rays over Red Sox 5-3, featuring great performances by Molina's bat, Escobar's glove, and the arms of Lueke and Rodney.

The day started with latin music, salsa dancing, plantains in the club house, and the creation story of Matt Moore. Those links are worth your time.

Matt Moore started the evening by nailing Jacoby Ellsbury in the shoulder, allowing a base runner and making us all smile just a little. The smiles would be short lived. Pedroia earned a double after his batted ball skipped off the third base bag, and then Moore missed his spot by well over a foot on a 1-0, 92 MPH fastball to David Ortiz. He crushed the inside-heater and I'm not sure it's landed yet.

There was no denying that Boston is a great team with a talented lineup. Entering this evening their wRC+ was 110, just above the Rays' 109, still their offense was stymied after losing two at home over the weekend, 2-8 over the last ten games. The Ortiz homerun had me fearing regression.

Moore responded in the second by K'ing Will Middlebrooks (swinging), Stephen Drew (looking), and Ryan Lavarnway (looking) on high curveballs. The shift to the breaking ball seemed to be a direct response to losing control on the fastball through the first half of the lineup.

It took Moore 30 pitches to tackle the first inning, 15 pitches in the second, then nine in the third. Meanwhile John Lackey pitched 21 to get through six Rays batters.

The Rays offense wasn't much for support in the early innings: Jose Molina notched the first hit for the Rays in the third by knocking a grounder past Pedroia. Yunel Escobar followed by driving a first-pitch mistake into the gap, and the hustling Molina was unable to stretch the well-hit opportunity farther than first base.** Joyce took an easy walk before Ben Zobrist (.386 avg, 5 walks, 5 grand slams previously on bases loaded) grounded out to end the threat. Lackey almost had Zobrist on a foul ball down the thirdbase line, but the Red Sox personnel standing in the on-field bullpen were unable to scatter and Middlebrooks was prevented from a clean play on the ball.

**Funny Story here: Desmond Jennings hit a one-hopper that bounced into a stretching Middlebrooks's glove. He made a great turn-and-throw to catch the runner at first before head umpire Joe West (who did not have a direct look at the play) ran over to single it was a line-out. He was completely wrong, but that didn't actually matter.

Moore retired twelve straight batters after his three earned runs in the first inning. By the time Napoli and Gomes returned to face Moore (fifth and sixth in the lineup), Moore had returned to his fastball, including a K of Napoli looking on a heater middle-high.

This was Moore in the first inning (30 pitches, 1 whiff): 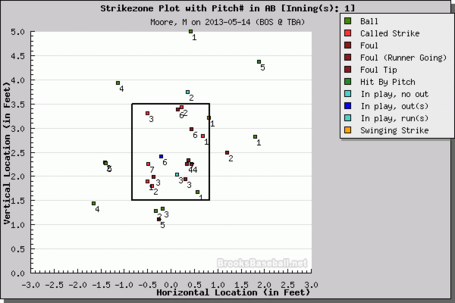 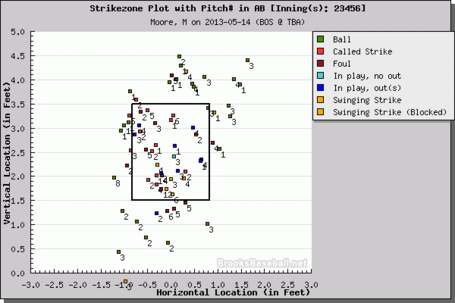 As you can see, the control was not totally there, but Moore was getting results. He also responded well by altering his pitch selection, which can be noted here: First inning vs. Rest of Game.*

Longoria started the fourth by battling a full-count and then reaching out for a solid hit on the outside corner of the strike zone for the leadoff single that had Dwayne Staats and Brian Anderson giggling. It was a nice piece of hitting. James Loney used an easy swing to rocket the ball into right field, and with runners on the corners Luke Scott looped a double to left field on a checked swing.

Two men still on, Kelly Johnson struck out on a backdoor slider that had him swinging late before Molina punished another mistake over the heart of the plate with another easy swing that plated the runners. Tie ballgame.

Escobar only needed on pitch to knock another hit into right field, and at this point you'd think the Red Sox would pull the outfield much shorter, and they kind of did. Ellsbury caught an easy fly to center field that was not very deep, but Molina and Escobar still took off running, advancing to second and third without a throw. A high pop up by Joyce toed the first base line for a very long time, and the two-out runners gunned it home. Pedroia called for no one to go for the ball after Napoli lost it in the lights, but it stayed fair - landing as the two base runners crossed home plate.

Lackey, after many visits at the mound, wouldn't make it long, leaving the game in the fifth inning. Moore was finished after the sixth inning, pitching his seventh and eighth strikeout in the frame and reaching 100 pitches.

The relief picked up right where Moore left off. Okay control, great results.

Riding two strong outings (2.0 IP, 2 K, 0 BB), Jake McGee was aiming for consistency in the seventh inning. He slowly ratcheted up to 98 MPH and a full count to Middlebrooks before the ten pitch at bat ended in a chopper to short that required Escobar to reach and run toward second base. Stephen Drew followed with a walk as Josh Lueke warmed in the pen and the control started getting ugly. Lavarnway lined out, but Ellsbury earned another walk, his third free base. McGee was lifted after 27 pitches, only 13 for strikes.

Lueke entered the game with confidence and fed Shane Victorino seven supreme breaking balls, four horizontal (splitter) and three vertical (curveball) to force a line out to Loney and end the threat. It was one, masterful plate appearance.

The dueling plantains took the mound to finish the eighth and ninth. Peralta battled Pedroia over eight well-placed pitches until a hard liner was knocked down by the pitcher and thrown to first. Ortiz flew out to Jennings, facing change ups and the shift, and Napoli struck out on "Smedium's" heater.

Rodney entered throwing 96 MPH and couldn't miss, taking Jonny Gomes down after two fastballs and a dirty change up inside to get 'em swinging. He worked a 3-2 count to Middlebrooks before earning another K on the change before finishing Stephen Drew the same way.

Three K's, each changes. It was a sight to behold.

Moore earned his seventh win, becoming the first Rays starter to begin the season 7-0 in franchise history, and I think anyone watching was ready to take Peralta's lead from this afternoon:

#RedSox manager John Farrell with a prophetic comment about hitting with RISP before the game:

Abraham tweeted the above link in response to Ortiz's three-run jack, featuring this quote:

"The bottom line is that we continually create opportunities... If we were not giving ourselves opportunities or at-bats with runners in scoring position, to me that would be a much greater issues than having the opportunities and we just haven't cashed in."

I guess Ortiz was the only one making a deposit, amiright?

McGee goes 9 straight heaters of >=95 w/ Middlebrooks fouling 3 straight back. Pitch 10 was a 2-seamer & got a groundball out. More of that

This is hard to disagree with. After struggling so often with location, the 2-seamer/cutter was incredibly well placed. Could this be McGee's missing link in 2013?

This is the 26th straight game in which the #Rays have held a lead, a streak that includes their last 10 losses

The also lead the AL East in runs, average, and RISP since April 26th.

Sometimes I love James Loney so much that I want to cradle him in my arms like a wee baby and tell him how wonderful he is. #Rays

Hard to argue with. James Loney was 2-4 with one run on the night, and still leads the American League in batting average. Are we calling this the Magic of Kotch or just Talent?

Sandy, forgive me. It's a great point.

Jose Molina had three hits on the evening, two RBI, and one run, featuring a double that he barely legged out in the eighth. He didn't slide for the safe call, he just kinda slowed down, probably just to not injure himself (good call). Earning the safe call was awesome, and riding that momentum, I would have been okay with him stealing third.

Rodney's magical plátanos are here to stay. They're on a roll. We're looking for some good recipes.

What is this, pinterest? Really though, the Rays are in an incredible groove, and as Rays Index notes, have already made up 5.5 games on Boston. And plantains are cooler than squirrels or something, so I'll take it.