Is James Loney really this good?

Probably not. But maybe? Please?

Share All sharing options for: Is James Loney really this good?

This story isn't exactly new to Rays fans. Andrew Friedman signs a slap-hitting first baseman who provides more value with his glove than with his bat. Said player is coming off a bad year. Said player bats over .300.

Casey Kotchman's dream performance continued for most of 2011, before he came crashing back to normalcy the following season in Cleveland. Kotchman's regression was very predictable, and the most surprising aspect of the whole affair was that it took so long. The reason it was so predictable was that Kotchman's "improvement" was almost entirely due to an increase in BABIP (batting average on balls in play), which is widely known to be untrustworthy when looking at only a single season's sample size. What's more, there was very little difference in Kotchman's approach to signal that he had changed as a batter. His batted ball profile was the same, his [lack of] power was the same.

So the salient question for Rays fans right now has to be, "Is James Loney any different than Casey Kotchman?"

Probably not. He's hitting .381/.431/.566, with a BABIP of .408. That's nothing close to sustainable. There are, however, a few reasons to remain hopeful. First off, Loney has been a better hitter (slightly above league average, 105 wRC+) more often than Kotchman. His starting point for a breakout was always higher. Secondly, Loney has improved in areas other than BABIP.

Loney is hitting fewer ground balls (33.7% in 2013 as compared to a career 42.9%), and instead hitting more line drives (34.7% compared to 23.0%). Correspondingly, Loney is hitting for more power. He's currently sporting his highest ISO (.186) since 2007. Now at 124 PAs, it's still too early to put much faith in that ISO, but that'll start to come soon (Russell Carleton found that ISO stabilizes at around 160 PAs). Also, Loney (who's always been good at making contact), has been even better so far this season on pitches outside of the zone (86.4% O-Contact% compared to a career rate of 76.9%). It's still early for O-Contact%, but that's something else to watch for Loney as the season progresses.

When I'm looking for a change in approach, I always go to Jeff Zimmerman's Baseball Heat Maps. 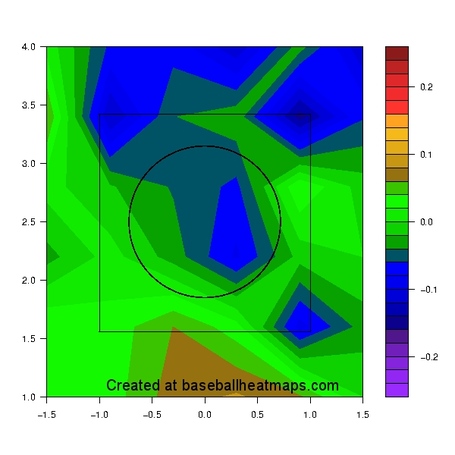 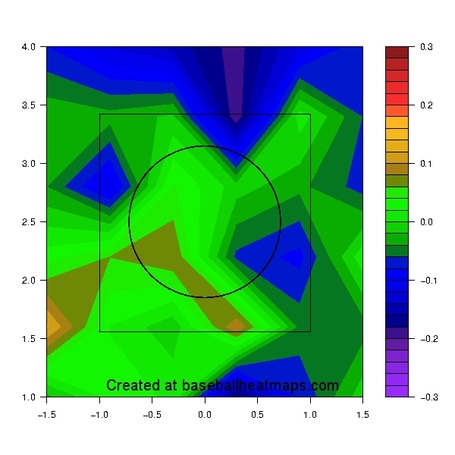 I don't see any change in approach there. Here's a graph of his results on swings in 2013 compared to in 2011-2012 (against pitchers of both handedness). A hot color means he's hitting the ball harder in that location. 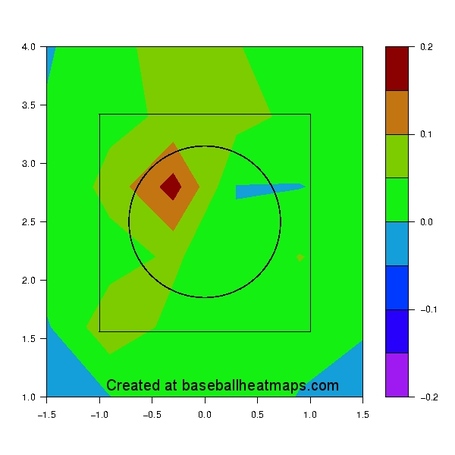 Well that's something. On the pitches that Loney should be hitting hard, he's hitting them harder than he has previously. I wondered if his spray chart has changed at all. Maybe he's hitting the ball harder because he's pulling it more?

The below chart shows Loney's angle of hits off fastballs for 2011 (a pretty decent year for Loney), 2012 (a bad year), and 2013 (this year). Positive angles are pulled balles, zero is up the middle, negative numbers are hits taken the other way. 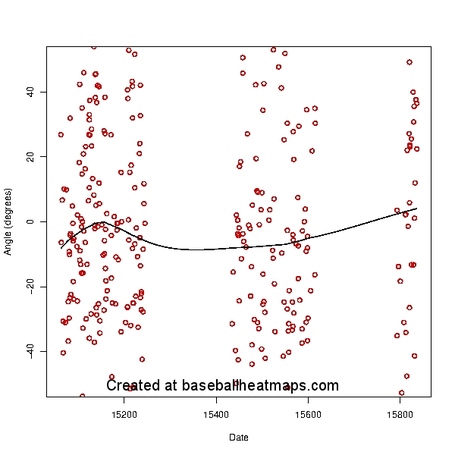 I don't think this is a huge shift. Loney uses the whole field, and always has. But it is somewhat comforting to see him closer to his spray chart from when he's previously had success.

What exactly am I trying to say here? No, you should not believe in James Loney's great .408 BABIP, but there are a few hopeful initial signs for him. Watch his ISO, his batted ball profile, and his O-Contact% going forward, and start to feel good about the fact that it looks like the Rays are getting the good Loney (somewhat above average offense, great defense), and that 2012 was the outlier.

All statistics are from FanGraphs.