The Rays completed a sweep of the Orioles behind Matt Moore's left arm and the left handed bats of Luke Scott and Matt Joyce.

Whenever you can be mentioned in the same breath as Babe Ruth you're doing something right. Unless, as Rays color man Brian Anderson noted, it's for something off the field. Today Matt Moore joined Ruth in becoming just the second left handed starter age 24 or younger to start a season 8-0.

We all know that wins don't mean a whole lot, but being 8-0 with an ERA of 2.29 is awful helpful on a team with struggling starting pitching. He only struck out three hitters, but, more importantly, walked just one. His seven innings were the second most he's worked this season. It wasn't as easy of an outing as the box score may suggest, though.

The Orioles had men in scoring position four times against Moore but were able to collect just one hit in those situations. That's been Moore's MO this season. Coming into today hitters had a line of .032/.143/.111 against him with RISP. Adam Jones was able to single in Manny Machado after his leadoff triple in the fourth (which should have been caught by Jennings or Joyce), scoring the O's only run. Jones then stole second and third base, putting Moore in another jam but he was able to retire the next two hitters without any further damage.

There were a few too many three ball counts, forcing Moore to make perfect pitches, but in most instances he did just that and helped the Rays to a series sweep. Joel Peralta and Fernando Rodney threw a perfect inning apiece.

The Rays offense wasn't nearly as explosive as it was the first two games, doing just enough to get the win. The play everyone will be talking about occured in the top of the sixth inning when Matt Joyce hit a line drive toward the wall in right field. It hit between the wall and the foul pole -- in a strange middle area not painted yellow for some reason. 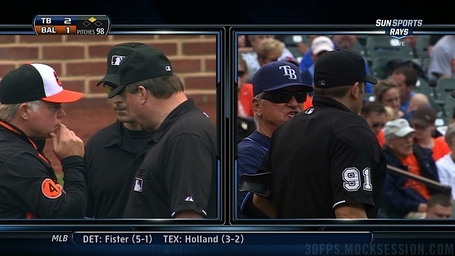 After being ruled a double, Baltimore manager Buck Showalter came out to argue that the ball landed fair. Maddon, knowing the ball couldn't be overruled, asked the umpires to review the play, thinking it was a home run. The sequence took 10 minutes, with both managers unhappy, arguing their case for 9 minutes. Thankfully once they did review the play it was correctly called a home run. Joyce had a huge series, picking up five hits, including two home runs, while driving in six. On the season he has a .351 wOBA and 124. wRC+.

Evan Longoria extended his hitting streak to 13 games and has reached base in all but one game this season.

The series sweep also evens the Rays with the Orioles at 23-20.