Get to Know Kelly Nash

A passion for sports has always come natural to the newest face of the Sun Sports Rays broadcast crew, Kelly Nash.

Share All sharing options for: Get to Know Kelly Nash

Who concerned her parents as a young girl when she wanted a poster of Cal Ripken Jr. to hang in her bedroom next to one of Michael Jordan? That would be the newest face of the FOX’s Sun Sports Rays broadcast crew, Kelly Nash.

Kelly is the oldest of her three sisters, and the only one of her siblings with an interest in sports. I had the pleasure of interviewing Miss Nash recently and I could definitely tell that she has such an immense passion for sports and sports media.

Growing up, Kelly would always attend sporting events with her father in south Florida. She always knew that she wanted to be a journalist when she grew up, finding inspiration from Joan Lunden, former co-host of Good Morning America.

While attending undergrad at Clemson University, Kelly covered Clemson baseball for six years, of which the last two she was a Grad assistant covering them as a writer. After getting her first Masters at Clemson in Youth Development Leadership, she went for a second Masters degree at University of Miami in Broadcast Journalism, where she was able to fine tune her on-camera skills.

Kelly always knew that she wanted to be on camera.

"I think when you are passionate about a game, a sport, a topic, you will do whatever you can to get your foot in the door. This business isn’t about faking it until you make it. You have to know it. There’s no faking your knowledge of baseball, if you want to be covering it on camera where you have to think on your feet, you really have to know a lot of the ins and outs of the game." 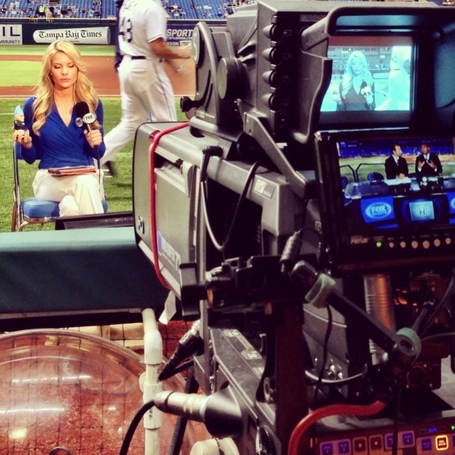 It wasn’t until Kelly attended Grad School at Miami University to receive her second masters that she actually decided to become a sports journalist.

"They made us pick a track, either sports or news journalism. I labored over the decision for a few weeks. Then, I got the opportunity to interview Mark Martin at the Homestead Motor Speedway. It was my first professional athlete interview, it was last minute notice so I had no notes ready, but I just had a conversation with him and it came naturally. After that, I knew [sports journalism] was the path I wanted to continue following."

Kelly actually learned that she had landed the job at Fox Sports while she was at her previous job with the Atlantic Coast Conference (ACC). While working for the ACC Digital Network, she was an On-camera Host & Production Assistant whose duties included being a live reporter for Saturday sports pregame show "ACC Kickoff", and a studio host of daily content including "ACC NOW" & sit-down interviews.

After interviewing for Fox Sports in Tampa, she played the waiting game. Then one day while at work, she noticed that she had a missed call from Brett Opdyke, an executive producer at Fox Sports. She ran outside immediately to call him back and when he offered her the job, she screamed in excitement. One of her friends later told her that Brett said he had never offered a job to someone as excited as her. Kelly said, "I had been covering ACC football and basketball for a few years, so I was excited to get back into my element with my first true love, baseball!"

Kelly talked about her first impressions of the Sun Sports crew and exclaimed, "They have been nothing but welcoming and are the most approachable, helpful, passionate group I’ve ever worked with!" She is impressed with the daily feedback she receives from everyone and by how much they truly want for her to grow and better herself. "I’ve never worked for a group who is as genuinely interested in my career and where I can go from here to improve to the next level."

During the Rays games, Kelly will take to the Sun Sports twitter, (@SunSportsRays) and interact with the fans, often creating a designated ‘hashtag of the game’. She has been impressed with the loyalty and the range of Rays fans. She talked about how she has fans tweeting in from all across the United States, and even across the pond in the United Kingdom. "It wasn’t announced that I had taken this job until Marc Topkin ran the story on Twitter. Overnight I got 500 new followers." Kelly’s communications with the fans speaks volumes to her about how much this fanbase loves social media, the Rays, and interacting with everyone involved in the Rays organization.

If you haven’t already, give Kelly a follow on Twitter - @KNashSports. She posts a lot of behind the scenes ‘Vines’ and is constantly interacting with Rays fans.

Also, her selfie atop the Green Monster in Fenway is picking up some attention on the internet. 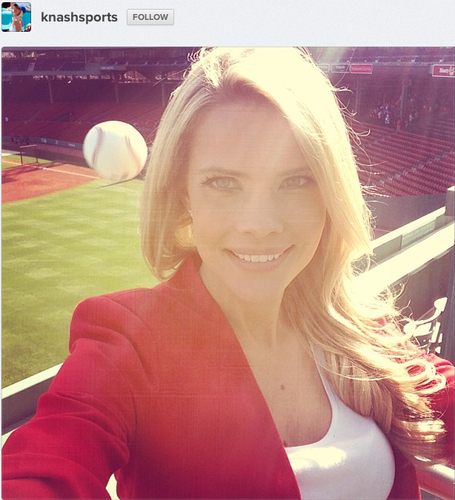