Using pitch data from his brief appearance with the Royals.

This afternoon, Jake Odorizzi, one of the returns from the James Shields trade, will get his first start in a Rays uniform. Back when the trade was made, Michael gave an introduction and there are plenty of scouting reports from his time in the minors. But we don't have to rely on the scouting reports alone. Odorizzi got a cup of coffee last year with Kansas City, and that means that we have PITCHf/x data. He came in as a reliever in two games, and started two others, pitching seven and a third innings. It's not enough to draw any conclusions about Odor's tendencies or abilities, but it's plenty to get a sense of what he throws. 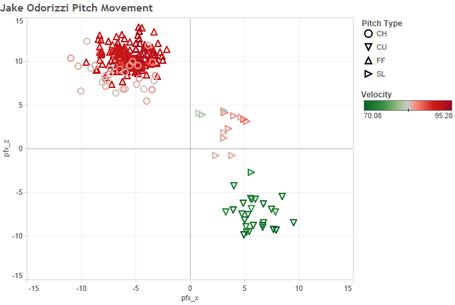 That's a fairly standard fastball, changeup, slider, and curve repertoire, but there are a few points of interest. The first is Odorizzi's fastball, which averages in the low 90s and can reach 95 mph. It's the fastball of a flyball pitcher, without much run, but with extremely impressive rise.

For some context, here are the career average four-seam fastballs (using Brooks Baseball classifications) for all of the 2013 Rays starters and James Shields. Click to enlarge. 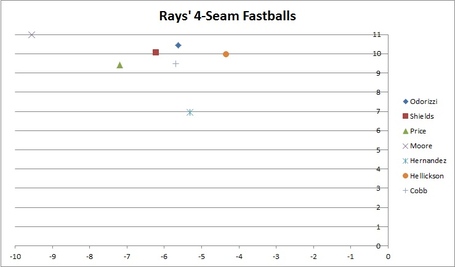 What can we learn from this graph? Matt Moore's four-seamer is crazy, Roberto Hernandez's is barely a four-seam at all, and Jake Odorizzi would have either the second best or the third worst if you were judging based only on movement in one dimension (that would be silly to do). I think that's okay. Not everyone can be Matt Moore, and I like pitchers with one extreme dimension to their pitches, rather than average all-around movement. It's possible to succeed with good command of a straight but rising fastball (that's how Joel Peralta pitches).

Let's jump back to Odorizzi's PITCHf/x data from last year, and focus just on the fastball alone. 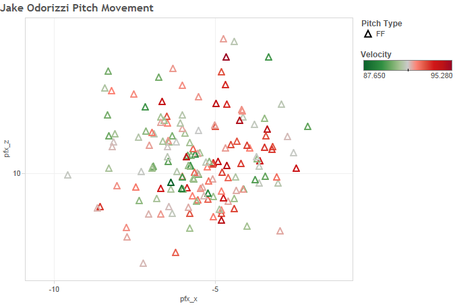 I'm not going to seriously dig into classifying Odorizzi's fastballs until there's more data to look at, but I think this graph shows the beginning of a pattern. Horizontal movement doesn't appear to affect vertical movement much at all, but the faster pitches are a bit straighter. I take that to mean one of three things: 1) Nothing whatsoever. 2) Odor actually throws both a four-seam and two-seam fastballs, and as he pitches more we'll learn to differentiate them. 3) When he tries to throw hard, he loses movement. I'd be fine with choices one or two, but choice three would be something for Odor to work on.

Back to Odorizzi's secondary pitches. 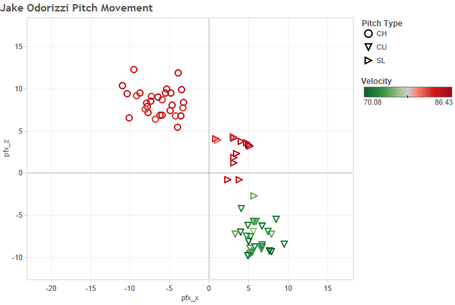 None of these pitches are very impressive. His 84 mph changeup is fairly straight, yet neither does it precisely mirror the movement of his fastball. For success with his changeup, Odorizzi will need to rely on establishing his fastball and then selling the pitch with arm speed.

Sliders are more difficult to evaluate based solely on their movement. Also at 84 mph, Odorizzi's version of the slider is closer on the spectrum to a cutter than it is to a curve, but pitchers succeed with every manner of slider. If Odorizzi can command the pitch I won't have a bad thing to say about it. In his brief major league appearance last year, he used it almost exclusively against righties.

Let's get a bit of context on Odorizzi's curve. 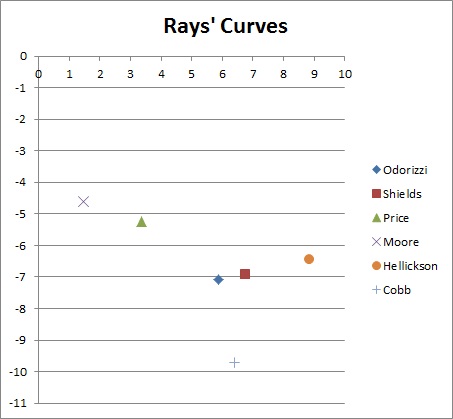 It's neither as much of a sweeper as Hellickson's nor does it have as much 12-6 drop as Cobb's. It most resembles the curve of the man he's seeking to replace in the Rays rotation, James Shields. You will remember that Shields's curve was never a great strikeout pitch, but he used it almost as a second fastball, something he could throw for strikes and work other pitches off of late in the game.

Overall, this is not the repertoire of a front-line starter, but no one is expecting Odorizzi to be one right now. All he needs to do is compete, and let the juggernaut that is the Tampa Bay offense do the rest of the work.