Share All sharing options for: Rays vs Blue Jays, Take 2

Since the Rays last saw the Blue Jays, Toronto has gone 4-7, taking two from Boston and clobbering two games against the Giants. The Jays scored 36 runs over those four wins before returning to their anemic ways for two games in New York.

The Rays have posted seven wins in the same time frame, including two more games than Toronto has played, and the team is riding a 9-11 win streak dating back to May 8th and 9th against the Jays. A rainout of Game 3 spared Toronto from a sweep and has pushed R.A. Dickey into today's starting role at Rogers Centre.

It's been a tough road for Tampa Bay; they are facing AL East opponents in 16-of-19 consecutive games this month, which began with a roller-coaster defeat at the hands of the Jays on Monday, May 6th. Yet after a sweep of Baltimore in Camden Yards, the Rays are riding a wave of energy flying into Canada for this three-game series.

The Rays play an interesting set of times this week: today at 1:07 thanks to a regional holiday (Victoria Day!), a normal slot Tuesday at 7:07, and an early start Wednesday at 4:37. The Rays will then have a day to fly home before facing the Yankees in two-of-three day games as well - including a 4:10 start on Saturday, and the usual 1:40 for Sunday.

But that's later - here's to hoping the Rays can keep their offense together during the awkward sleep schedules. Per Fox Sports, the Blue Jays are 12th in the American League in runs per game, next-to-last in rotation ERA (ahead of the Astros), and 10th in bullpen ERA.

Out of routine this week, Jake Odorizzi gets the nod in David Price's stead after a strained triceps and a bout with many allergies landed our Cy Young on the disabled list. The Odor faces R.A. Dickey, who has yet to succumb to back and neck injuries, but has suffered a 3-5 record, 4.83 ERA, and 4.81 FIP in nine games.

Dickey's biggest problem mirrors what Price was facing, with a different twist: lost velocity. Dickey isn't known for spitting fire like Price, but he does have two knuckleballs to his name. He calls them "fast" and "slow" knuckleballs, and the "fast" one has lost its edge. Two MPH, in fact.

Here's a graph Eno Sarris already put together on Dickey's velocity for the knuckler over his career: 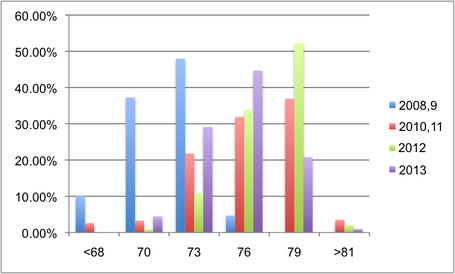 Because speed does not affect trajectory for the knuckleball, Dickey is still generating swings and misses with an impressive 10.2% whiffs, but he's having issues finding the strike zone like he used to, losing nearly five points on his Zone percentage (46.8% in 2013). If I may make a connection, a lack of speed seems to have led to more wary control - which is funny, considering Dickey has become one of the fastest working pitchers in baseball.

This wouldn't be such a problem if Dickey was still getting batters to swing outside the zone at last year's rates. After earning 34.5% swings with the Knuckle outside in 2012, that rate has fallen to 24.5% at a quarter of the way through the season. Making matters a bit worse, Dickey's O-contact% is up 5% on the knuckle as well. In other words, not as many batters are afraid to go after the butterfly-pitch as they were last year, and this too could be a direct result of lost velocity. A split second longer to watch the ball float is enough to take a pitcher from Cy Young to Ricky Romero in no time at all.

Still, this is R.A. Dickey. In his most recent start Dickey struck out ten San Francisco Giants, going 6.0 innings over 115 pitches. He earned 15 whiffs on the knuckle, threw 62% for strikes, and touched 79 MPH, so the Cy may still be lurking. Against Tampa Bay, that extra day of rest from yesterday's rainout in New York may come in handy.

Old man Ortiz will take the mound for Toronto in Game 2. The 39 year old Dominican has played three games this season, starting two and posting four strikeouts in that time. He pitched for the Tampa Yankees last season, never breaking out of Triple-A and featuring a 3.45 ERA and 4.10 FIP after converting back to starting. The Cubs had used him in relief during the 2011 season for 22 games.

Ortiz's arsenal includes a Slider, Sinker, Change and Four-seam (in that order), with an emphasis on the most former. Ortiz has improved his Slider since he was last in the majors. He's lost velocity over time, with no pitches averaging into the 90's, but the Slider benefits in movement from the lack in speed. He'll use it in most high leverage counts, and primarily against right handed hitters. Against lefties he dabbles with the Sinker instead, but only to differentiate through the at-bat. Ortiz lives and dies by the Slider, without the Justin Masterson flare (Ortiz: 3.23 HMov, 2.04 VMov, Masterson: 4.63 HMov, 0.19 VMov).

Buehrle has run in to a number of problems the last few seasons, but unique to 2013 has been walks. The southpaw has only walked 50 or more batters once since 2005, but at a career high 6.6% base on balls, he's on pace to throw offer over 60 free rides. He allowed only 40 last year in Miami.

Part of the problem may be attributed to Buehrle's release point, which had been shifting in since 2009. The Blue Jays have been pushing his arm slightly farther out this season, about an inch in total, but has resulted in lost control on the fastball.

New this season has been Buehrle's change up, which has been used for seldom, but far more often for swings and misses, especially in two-strike situations. The big lefty has an easy Four-seam at 85.5 MPH, a recently groundball inducing Cutter, a not as effective Sinker, the aforementioned Change up, and every once in a while a Curveball.

Buehrle walked three in his last appearance, a five-runs-for-six-hits performance in New York that saw the Blue Jays shut out by Hiroki Kuroda. Two of those runs scored after he left the game in the sixth after he fell apart in the frame. Buehrle pitched almost four innings without a hit, but the sixth saw a ground-rule double, a single, and the a double - and if my impression is accurate, that had a lot to do with poor fielding. In spite of failings, Buerhle, like Dickey, is returning to being effective. Time for the Rays to shut that down.

As far as lineups are concerned, it's just about the same Toronto team the Rays faced two weeks ago, except now Rajai Davis is injured too.

With Davis out of commission and their outfield kinda fielding like my little brother's little league team, the Jays have called up Anthony Gose - a hyped up, 22-year old center fielder batting .227/.341/.327 with a 12.4 BB% at Triple-A Buffalo. The corresponding move was to option RHP Mickey Storey.

Gose's promotion comes earlier than expected; his pending promotion was advertised to be a permanent solution if/when he got the call mid-season. Now he joins the ranks of Blue Jays hitters who struggle with left handed pitching.

Current CF Colbry Rasmus and sort-of-injured LF Melky Cabrera are still starting for the Jays behind R.A. Dickey, but the tides may be turning. The promotion of Gose will eventually force DH Lind or CF Rasmus out of the line up in the near future, possibly even tomorrow.

My expectation would be to see Lind traded or benched to get better defense in Center Field, shifting Rasmus to the corner.

This is a Jays team with plenty of potential. Hopefully the Rays continue their trend of dominant young pitching, impressive defense, and a pleasantly surprising second-in-baseball offense.