After a sweep it's easy to be overdramatic about a loss. Luckily, neither the start by Jake Odorizzi nor the offense can be to blame, as the Rays 7-5 loss to the Blue Jays can be credited with Josh Lueke's seventh inning appearance.

Odorizzi began the game with a rough first inning, giving up a leadoff single to Melky Cabrera, followed by a strikeout to Jose Bautista and another single by Edwin Encarnacion. Adam Lind worked Odorizzi in a 12-pitch at bat that resulted in a sac fly RBI to score Cabrera, then Brett Lawrie hit a triple scoring Encarnacion; allowing the Blue Jays a 2-0 lead in the first and 29 pitches from Odorizzi.

Evan Longoria led off the second with a single, extending his hitting streak to 14 games and has now reached base in an MLB high 43 of 44 games. Sam Fuld hit an RBI single to score Longoria on a fielder's choice, giving Odorizzi one run of support.

In the bottom of the second, another appearance by the human element caused quite the heated reaction from Ben Zobrist, as Henry Blanco hit a ball down the left field line that Fuld fielded perfectly and threw to Zobrist, who tagged out Blanco. Blanco was ruled safe by C.B. Bucknor (shocking) though replay clearly showed that he was out. The mistake came back to count, as Cabrera doubled in Blanco and gave the Blue Jays a 3-1 lead. 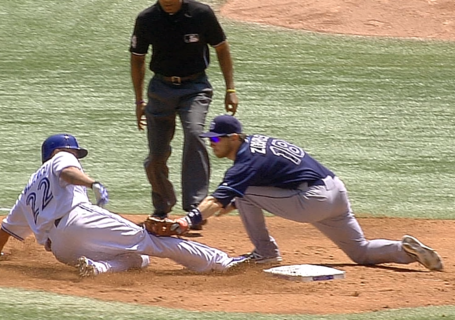 The Rays managed to tie it up in the third, via a walk from Matt Joyce, a single from Zobrist, and a double from Longoria that scored both Joyce and Zobrist.

Odorizzi settled in, and during the third had his first one-two-three inning, striking out both Lind and Lawrie on his curveball. In his last inning of work, the fifth, Odorizzi again had a one-two-three inning and struck out Bautista for the second time.

He retired ten of the last eleven hitters he faced, relying heavily on his four seam fastball and throwing 63% of his pitches for strikes. Odorizzi's final line was five innings pitched, only five hits given up, three earned runs, one walk, and six strikeouts. He threw 92 pitches, so the Rays turned to the bullpen...where Jake McGee was surprisingly dominant.

McGee gave a glimpse of his former self when he entered the game, only throwing eleven pitches in his one-two-three sixth, with two strikeouts. It was a pleasant surprise, and hopefully a sign of things to come.

The game fell apart in the seventh inning, as Lueke entered and lacked any control, walking Bonifacio, Bautista, and Munenori Kawasaki; then giving up a three-run double to Encarnacion, providing the Blue Jays a 6-3 lead.

Kyle Farnsworth came in to relieve Lueke and walked Blanco on two outs, then gave up a triple to Kawasaki, giving the Blue Jays a 7-3 cushion entering the ninth.

The Rays attempted a rally on a bunt single from Luke Scott, followed by a two run home run from Yunel Escobar. Something seemed to be brewing as Desmond Jennings singled, then Matt Joyce walked, but Ben Zobrist struck out to give the Rays a 7-5 loss against the Blue Jays to start off the series.