Rays vs. Jays, game 2: Rodney, Lobaton frame their way out of a bind

Share All sharing options for: Rays vs. Jays, game 2: Rodney, Lobaton frame their way out of a bind

The beginning of the game was highlighted by excellent play from the Rays outfield both offensively and defensively. With two outs in the bottom of the first inning, Edwin Encarnacion hit a hard line drive that landed on the left field warning track and bounced against the wall. Kelly Johnson fielded it off the wall like he had been playing outfield his whole career and fired a (one hop) strike to second base to get EE3 at second. Then, in the next half inning, Johnson blasted his eighth home run of the season to straight center field. Evan Longoria had doubled and scored after two groundouts, so Johnson's homer brought the score to 2-0.

To start the next frame Adam Lind hit a fly ball hard to deep right center. Desmond Jennings ranged back, covering a ton of ground, and then made the catch look simple even though it was at an awkward angle over his shoulder. He even managed to avoid crashing into the wall. A lesser fielder would have made that play dramatic or not made it at all, but Jennings is far too smooth for that. Then, following Johnson's lead, Jennings hit his fifth homer on the first pitch of the next half inning. Singles from Matt Joyce, Evan Longoria, and Luke Scott (with a few fielder's choices in between) stretched the lead to 4-0.

In the bottom of the fifth inning, the Jays finally got on the board when Colby Rasmus guessed right on a frontdoor sinker that caught a bit too much of the plate. Rasmus's pulled shot was the definition of a no-doubter, and a reminder of why he was once such a well regarded up-and-coming center fielder.

The sixth inning was all about Yunel Escobar and the shift. The first two outs came on groundballs more or less up the middle that Escobar fielded routinely and converted into easy outs at first. Then Jose Bautista hit a grounder deep into the hole between shortstop and third. Escobar, who was shifted slightly to pull, ranged far back to his right but muffed the backhand grab, having the ball go off the edge of his glove and into left field. It would have been a tough throw even if he had made the grab cleanly but he'd have had a better chance playing straight up. After a walk from Encarnacion raised the leverage, Adam Lind hit a hard grounder straight back over the mound that looked sure to be a hit, but the shift giveth to the Blue Jays and the shift taketh away. Escobar was already positioned near second base, and he was able to knock the ball down and throw Lind out from his knees to end the inning.

If you just looked at the box score, you might have thought that Alex Cobb didn't pitch all that well. While he only allowed three hits and two walks, he also only struck out two batters. You'd be wrong. He threw his fastball 57% of the time and didn't get a ton of whiffs (two on the fastball, three on 29 changeups, none on 17 curves), but he had Toronto baffled. They were reaching for pitches all over the zone, making weak contact and mostly hitting ground balls. Of the 20 balls in play that Cobb allowed, 15 were grounders. That's a recipe for success.

Cobb's night ended one out into the seventh inning when Brett Lawrie hit a hard grounder in Longoria's direction. Longoria made a great diving stop and threw mostly on target to first, but Loney couldn't handle the throw and it bounced past him and into the stands. With Cobb at 107 pitches and the lefty Rasmus up, Joe Maddon made the switch to Jake McGee, who promptly overpowered Rasmus (popup foul) and Mark DeRosa (strikeout swinging).

Peralta came on in his usual spot as eighth inning setup man with a difficult job to do, first facing Munenori Kawasaki, the nine hitter, before needing to run through the teeth of the Jays lineup. Kawasaki reached for a good low pitch from Peralta and plopped it into center field for a soft single. Melky Cabrera worked a seven pitch at bat, fouling off many pitches, before finally earning a walk and bringing the tying run to the plate in the form of the fearsome Jose Bautista. When Bautista hit a liner into short left field, Ben Zobrist didn't panic. He picked it up on the bounce and threw to second base, allowing the speedy Munenori to score without a challenge, but holding the baserunners to first and second.

It seemed as if Zobrist's composure would pay dividends, as Peralta (who didn't look bad this inning even while giving up walks and hits) struck out Encarnacion and coaxed an ideal double play ball from Adam Lind. Ryan Roberts bobbled the pickup however, and could never quite get a hold on the ball to record one out. With his reliever running a high pitch count and the leverage of the situation skyrocketing, Maddon went to his closer for the five out save.

One 98 mph fastball from Rodney produced another ground ball to second base, and this time the Rays turned one of the prettier double plays you will ever see. Roberts fielded the ball cleanly and got it to Escobar just as he touched the bag. Escobar touched second with his left foot, and then used the bag to leap high over the breakup slide from Lind. At the apex of his leap, Escobar threw strongly and accurately to first base to get J.P. Arencibia by a step.

In the ninth, Rodney struck out Brett Lawrie, gave up a ground ball double to Rasmus, and coaxed a soft grounder from Maicer Izturis (that advanced Rasmus) before a wild pitch to Kawasaki brought home the run and a fourth consecutive ball walked the speedy nine hitter.

Don't worry though. Were you worried? I wasn't worried. Rodney always had it under control. He struck out Cabrera looking on three straight outside changeups that might have been called balls on a different day. 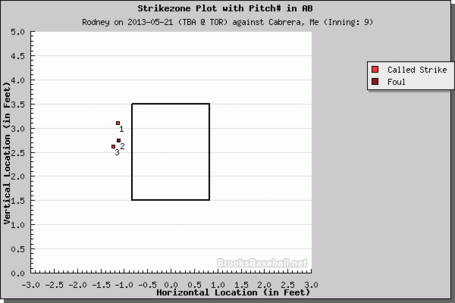 By the rulebook definition, those sure look like balls, but take a look at the pitches in the context of a normal lefty strikezone and the rest of the game. 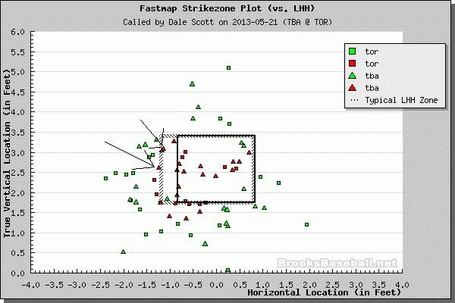 That doesn't look too bad. It's right on the line where umpires usually extend the strike zone, and most other pitches in that same area a couple inches off the plate had been called strikes earlier (including pitches to Rays hitters). Probably Cabrera should have been swinging. I'll take it.

All pitching numbers and graphs are from Brooks Baseball.