The surprising Yankees and the ageless Mariano Rivera return to St.Petersburg for a weekend series.

The New York Yankees return to Tropicana Field in first place in the AL East with a record of 28-18 and they hold a 4 game lead over the Rays (24-22). They visited St. Petersburg on April 22nd through 24th and the Rays took 2 out of 3.

In the first game of the series Matt Moore delivered 8 strong innings allowing only 1R/ER on 2 hits striking out 9 and walking 3. Ryan Roberts had 2 homers and Yunel Escobar added another as the Rays defeated C.C. Sabathia 5-1.

In the second game David Price delivered his best performance of the season but the offense was unable to take advantage against Phil Hughes and the Yankees scored 2-runs in the 8th inning to take a 4-2 lead. Evan Longoria hit a home run off Mariano Rivera in the 9th to draw the Rays to within a run but the Rays were unable to come back and lost 4-3.

The final game of the series matched Alex Cobb against Andy Pettitte and the game remained scoreless through 4 innings before the Rays added 2 runs in the bottom of the 5th and a single run in the bottom of the 6th. Alex Cobb absolutely dominated the Yankees going 8.1 shutout innings allowing 3 hits striking out 7 and walking 1 and the Rays won 3-0.

Since the two teams last met Curtis Granderson has returned to the Yankees, Reid Brignac has been acquired, and David Adams and Austin Romine have joined the team from Triple A. The injuries keep coming as Kevin Youkils, Eduardo Nunez, Francisco Cervelli, Joba Chamberlain, Andy Pettitte, and Ivan Nova have joined Derek Jeter, Mark Teixeira, Alex Rodriguez, and Michael Pineda on the disabled list.

Teixeira and Youkilis each had 6 plate appearances in a simulated game on Wednesday afternoon and are are inching closer to beginning rehab assignments. Another player of interest who may be getting close to returning to action is Michael Pineda who may begin a rehab assignment after one more appearance in extended spring training.

The Yankees are winning with their pitching. Despite being 4th in the AL in homers with 58 their offense has struggled averaging only 4.24 runs per game and a 93 wRC+ and a wOBA of .314. The inability to score runs has led to 24 of their 46 games being decided by 2 runs or less and they have gone 17-7 in those games. They are 8-4 in one run games which is 3rd in the majors behind Cleveland (11-3) and Texas (9-4). They won their first 19 games when scoring first before losing to the Orioles Tuesday evening.

The table below shows the Yankees hitters performance in the month of May.

Spent the month of April working out of the Yankees bullpen but injuries opened the door for him to join the rotation and he has taken advantage of it. He has made 4 starts going 1-1 with a 2.45 ERA and the Yankees are 3-1 in his 4 starts. The reigns have been taken off in terms of his pitch count as he is fully stretched out and delivered 113 pitches in his last start and 115 the start prior to that. His last start came against the Toronto Blue Jays delivering 7 innings allowing 1R/ER on 6 hits striking out 8 and walking 3. The data below is David Phelps data as a starting pitcher provided by Brooskbaseball.net.

Drafted by the Cleveland Indians and released after 2 season in the Indians system. He ended up in the Frontier League where he was signed by the New York Yankees and in a little over 2-years he made his way to the big league club. He made his first major start against the team that drafted him and earned his first big league win going 5 shutout innings allowing only 3 hits in a 7-0 Yankees victory. More about Nuno from R.J. Anderson at the Process Report:

Originally a 48th-round pick by the Indians, Nuno washed out of their system and wound up pitching in indy ball. He found his way onto the Yankees’ farm and has overachieved at every level since. The southpaw doesn’t have good stuff. His fastball sits in the mid-to-upper-80s and he throws a variety of junk pitches, including a slow curveball, to keep batters off balance......read more here

Sabathia has had his start pushed back one day and has a 4-3 with a 3.43 ERA. He's made 10 starts and delivered 65.2 innings pitched. He has a strikeout rate of 7.7 K/9 and 2.1 BB/9 but has given up 9 homers (12.0% HR/FB). His fastball velocity still has not returned as his fastball is averaging 89 mph. His last start was against the Baltimore Orioles and he went 6.1 innings allowing 4R/ER on 11 hits while striking out only 2 and walking 0. 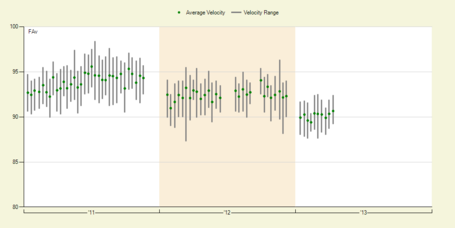