The Rays get a much needed win behind Alex Cobb's dominant outing.

A favorite superlative of traditional baseball analysts is The Stopper: A pitcher who when he takes the ball every fifth day can put an end to a losing streak, save a bullpen, and stop a potential tailspin. For the better part of the last five years that pitcher for the Rays has been James Shields. Sunday, Alex Cobb showed once more that he can fill Shields' shoes as he played the part perfectly, dominating the New York Yankees lineup for eight and a third innings while salvaging a win in the final game of a series that had so far been a disaster.

Through six innings, Cobb allowed just one hit, an infield single by Jayson Nix. Shortstop Yunel Escobar made a play deep in the hole and threw a strike to James Loney who appeared to receive the ball while Nix was still a step away from first base but the Umpire called Nix safe, triggering an argument from Joe Maddon. Replay showed that Nix was indeed out but the potential drama of a umpire botched no-hitter was avoided when Robinson Cano lashed a legitimate single into center field in the seventh inning. A solo home-run from Brett Gardner in the ninth inning would be the lone blemish on Cobb's line who departed with a man on base after throwing 113 pitches.

Like his spiritual predecessor, Cobb worked predominantly off his change up which he threw 43 times on the afternoon, generating eight whiffs while keeping the Yankee hitters off-balance. Like his unusual outing against the Padres, Cobb was again raking up strikeouts, punching out eight Yankees on the afternoon. However, Cobb kept his pitch count on track Sunday, by avoiding the free pass and inducing 13 ground balls. His command was outstanding, as he worked all corners of the zone and consistently baited swings on his change up in the dirt. Note the number of swinging strikes below the zone on Cobbs strike zone plot: 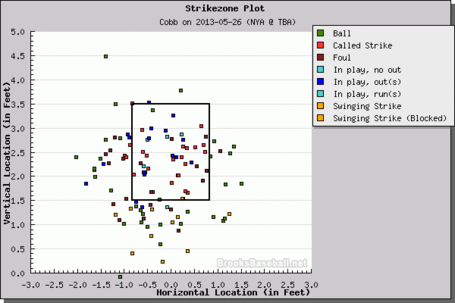 The Rays offense also came to live again after three relatively quiet days, pummeling Yankee ace CC Sabathia for seven runs on seven hits. The first rally was engineered in strange fashion as a second-inning hit by pitch and two misplayed fielders choices loaded the bases for Jose Lobaton who blooped a single into center field to plate the first run of the game. Sam Fuld followed up Lobatons RBI with a sacrifice fly and the Rays had an early two to nothing lead. In the third inning, the Rays got two more runs in more traditional fashion as Evan Longoria doubled and Sean Rodriguez hammered a low line-drive homerun to left field, just over the cutout and into 162 Landing. James Loney added a two-run homer during a three-run sixth inning to blow the game open.

Unfortunately for the Rays there were some more bullpen palpitations despite Cobb's gem of an outing. Cesar Ramos replaced Cobb, looking for the last two outs of the ninth inning but loaded the bases with two walks and then grooved a fastball to David Adams, who doubled home two runs and just missed putting into the left field seats. With the lead now at five Maddon had to turn to Joel Peralta to get the final two outs and close out the game, a move that I'm sure Maddon wasn't happy to have to make. When your 'A' relievers have to be used to preserve an eight run lead there is something awfully wrong with the bullpen. Considering the amount of pitching depth in the system I wouldn't be surprised if a shakeup were to come soon.

The Rays will now switch gears as the schedule moves from heavy AL East to inter league play. The boys in blue will don their military honoring Memorial Day uniforms and take on the Miami Marlins in a four-game home-and-home series beginning tomorrow at Tropicana Field.