Jake Odorizzi sent down; Colome up!

Share All sharing options for: Jake Odorizzi sent down; Colome up!

Rays pitcher Jake Odorizzi was sent down today, according to the Tampa Bay Times. He will be replaced by a reliever from Durham. Although Odorizzi didn't pitch all that well, the move was allegedly prompted by the need for more arms in the bullpen, not his performance. From the Times story:

"We have to make sure that we're covered in the bullpen so nobody gets hurt and we can disperse the work properly," manager Joe Maddon said. "There's been a lot of craziness among the bullpen, so we need to square that up."

It was fun while it lasted, Odor, I'm sure we'll see more of him later in the season. In the meantime, we're likely to get another look at Alex Torres, and possibly Chris Archer. Such is the exciting life of a team with young pitching depth.

As for the other event mentioned in that article, I have nothing to say. If it becomes real news and not ugly rumor, well, that would be a shame.

Alex Colome won the option-lotto and will be the pitcher called up in place of Odorizzi. 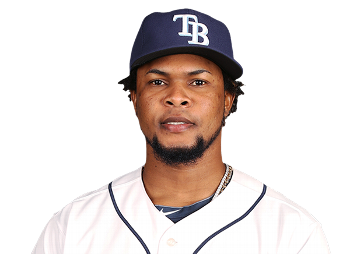 The 24-year old Dominican is one scary lookin' dude.

The loser here is Jeff Beliveau, the relief pitcher with the rest and qualifications for a quick bullpen stint. Instead, the organization is opting for hard-throwing Colome, who features two plus fastballs. Colome is a starter, so the call is intriguing. He has the ability to go longer innings should a starting pitcher (*cough, Fausto, cough*) need pulled early.

Colome has been a slow riser through the Rays organization, and this is his second year at Triple-A Durham. Through the first two months, Colome leads his league in strikeouts and offers the potential to mowdown the best of lineups.

For more on Colome, read the latest from Sobsey, covering his recent change in mechanics.

Before the season started, Colome, at the suggestion of pitching coach Neil Allen, radically altered what you would call his "stance" were he a hitter. He used to come set facing the plate, but the right-hander now sets up in profile, facing third base. This adjustment was made, he said, to straighten him out and remove some of the spine-tilt from his delivery. The result is very close to pitching from the stretch, which gives him a quicker move to the plate (that helps him keep baserunners from stealing as easily) and a more consistent release point-the sine qua non of pitching mechanics.

The Rays have yet to announce Saturday's starter in Cleveland. The leading candidate is surely Chris Archer, who was coincidentally drafted by the Indians, but should everything fall the Rays's way, perhaps the nod could go to Colome. That, or Colome could pitch earlier in the rotation, bumping the starters out to fill the void with an extra day of rest.