The Rays Tank: Sweep of the Marlins and Gaining Ground in the AL East

The Rays swept the Citrus Series last night as they defeated the Marlins 5-2 behind a stellar MLB debut from Alex Colome.

Share All sharing options for: The Rays Tank: Sweep of the Marlins and Gaining Ground in the AL East

The Rays defeated the Marlins 5-2 last night and completed the sweep of the Citrus Series as Alex Colome shined in his MLB debut. Colome went 5.2 innings, striking out 7 while allowing only one run (unearned) on five hits and two walks. Erik explores Colome’s outing in the recap of the game which you can read here.

Joe Maddon had this simple statement to say about Alex Colome:

The Rays have won five straight games and have made up some serious ground in the AL East. Over the past four days, the Mets swept the Yankees and the Phillies split the series with the Red Sox, making things a lot more interesting in the division standings. 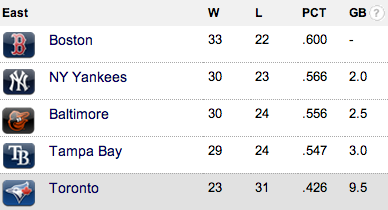 With one day left in the month of May, the Rays are currently three games out of first place in the division. The Red Sox and Yankees play each other the next three games as Baltimore takes on Detroit. Tampa Bay travels to Cleveland for the upcoming series where Matt Moore, Chris Archer and Jeremy Hellickson will take the mound, per Todd Kalas.

Yes, you read that right, Chris Archer will be starting on Saturday. After last night’s game ended, the Rays announced that Archer was called up and a corresponding roster move will be made later today.

In Archer's last start for Durham on May 26th, he went five innings, allowing four runs (two unearned) off of five hits and three walks while striking out season. On the season, he is 5-3 with a 3.96 ERA, racking up 52 strikeouts, but walking 23 batters over the course of his ten appearances. He has allowed 50 hits over 50 innings and opponents are batting .251 against him.

Marc Topkin discusses Cesar Ramos’ fiance’s fight against Hodgkin’s lymphoma and how she is currently completing her last round of chemo.

Barring any setbacks from his bullpen session on Saturday, Alex Cobb is expected to make his next start on Tuesday in Detroit. He also talks about how his scratched start meant that Matt Moore had the bat taken away from his hands in Miami.

-The Orioles played the Nationals during interleague play and the Mid-Atlantic Sports Network sat down with Bryce Harper and Manny Machado. Warning: The two say "you know" A LOT throughout the interview.

-NBC Sports’ Hardball Talk got some insight from MLB about what kind of TV monitors are being used for the umpire’s replays. Unfortunately, this insight came after they had received and shared some incorrect information from a "source who had access to the equipment" a few weeks ago. You can check out the updated post here.