He has the tools to be an ace. He'll go as far as his control takes him.

I wrote this last year, after Alex Colome's first start. That start was amazing, although he's failed to replicated that electric dominance in successive appearances. I'm republishing it now, as a reminder, not of what to expect, but of what to hope for from Colome tonight. -Ian

It's rarely fun to have your star pitchers miss games with injuries. The only time it can become fun is when your team is the Rays, and they have the future of their franchise sitting nearly ready in triple-A, in the form of Alex Colome (and Alex Torres, and Chris Archer, and Jake Odorizzi). The missed games by David Price and Alex Cobb give us a window into what we'll be seeing in the coming years.

Last night (recap here), Alex Colome pitched above his experience level. He shook off some first inning jitters to finish the night in the sixth inning with no unearned runs having allowed seven men to reach base and struck out seven more. Even more impressive than the numbers were his actual pitches.

I was having frustrating amount of trouble getting my axis to display faithfully in Tableau, so here's a rather un-slick picture of what Colome was throwing last night. Data is from Brooks Baseball, pitch classifications are my own. It's only one game, so caveats apply. 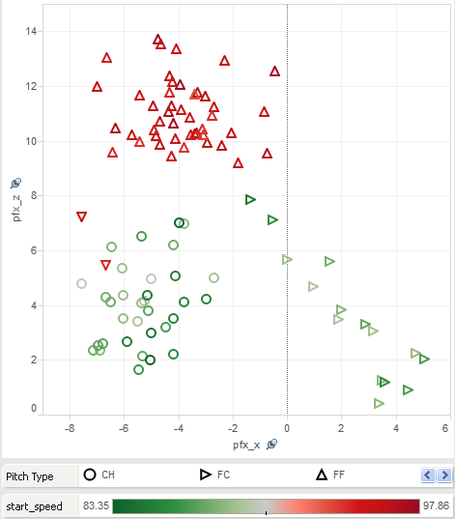 First off, holy cow that is a true rising fastball! Colome's fastball rose more than 11 inches on average, which if that were to continue would give it more jump than either the fastball of Jake McGee or Matt Moore (the gold standard in Rays fastballs right now). It doesn't actually run armside a whole lot (contrary to what Tommy Rancel said in his otherwise excellent take on Colome), averaging under four inches of run (great running fastballs will approach 10 inches). Regardless, this is the type of fastball that enables a pitcher to challenge hitters within the zone, especially since it's coming in at 95+ mph. Colome may not have great command, but he also has no need to nibble when he gets into trouble.

Colome's secondary pitches look to still be a work in progress, which is a beautiful thing. They're really good right now, yet they both have obvious room to improve. First look at his cutter/slider. He calls the pitch a cutter. Coming in around 90 mph, it sometimes moved like a good but relatively normal cutter, and sometimes like a very good hard slider. Note that the pitches with the most cutterish movement are also the slowest, leading me to believe that the change has more to do with not replicating mechanics than with purposefully throwing different versions of the pitch. Also note that every single whiff Colome produced with his cutter came off pitches with average movement. I read that as meaning that he had better command of the pitches near the middle of his cutter range.

Now let's talk about his changeup. Play a little game. Filter the chart below to just show pitches that produced a whiff.

Of the 20 whiffs he produced, 14 came on his changeup, which has never been that highly lauded in the minors. It sure was good last night (when a batter swung at Colome's changeup, he missed over 70% of the time). Now filter the graph to show all results but only changeups, and look at the velocity range. He threw his changeup as hard as 90 mph and as soft as 83 mph. Clearly, it is a work in progress, and Colome is still learning how to throw consistently. Not that it mattered much to hitters last night. They whiffed at the 90 mph changes, and whiffed at an 84 mph change. In terms of movement, Colome's changeup shows somewhat more run than his fastball, but it's not extreme. It does show decent drop, which is probably more effective on account of the crazy rise in his fastball.

On a final note, filter the graph to show only Colome's highly touted curves. What? There are none? Yeah, beats me too. Colome is supposed to feature a low-80s curve, but he didn't throw a single one. A curve of any type would give him something with real depth and downward movement to balance out everything else that's rising. My guess is that the Rays wanted him to keep things simple and work on execution in his first major league start. Still, it's yet another area that gives Colome room to improve on an already impressive repertoire.

In total, it's easy to see why Colome has the reputation as an inconsistent pitcher. He doesn't replicate his pitches all that well, but each one of his pitches is beautiful. He's an athletic pitcher, and his control has improved over his early minors work. He has the repertoire (pending adding in the curve) of a frontline starter, and the only question is whether he'll be able to improve his command and control enough to fulfill that heady potential.