The Rays Tank: Cobb Bounces Back

Alex Cobb improved to 4-2 on the season as the Rays defeated the Rockies 8-3 to take the series.

Share All sharing options for: The Rays Tank: Cobb Bounces Back

After a disastrous sixth inning in his last start, Alex Cobb bounced back nicely yesterday in the Rays 8-3 victory over the Rockies to end the ten game roadtrip. The Rays went 4-5 on the roadtrip, and had a game postponed in Kansas City due to snow, which will be made up at a later date.

Cobb went six and two thirds innings today, allowing three earned runs (all solo homers) while striking out six and allowing eight hits and one walk. He mixed up his pitches nicely, throwing 51 fastballs for 32 strikes, 31 changeups for 21 strikes and 25 curveballs for 18 strikes. Here's a look at the difference in his pitch location between the last two starts. 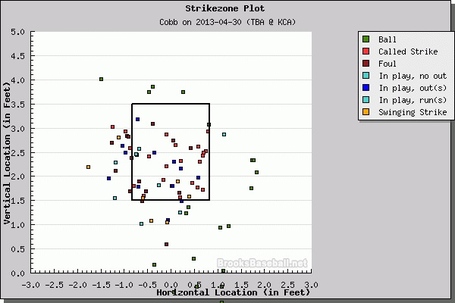 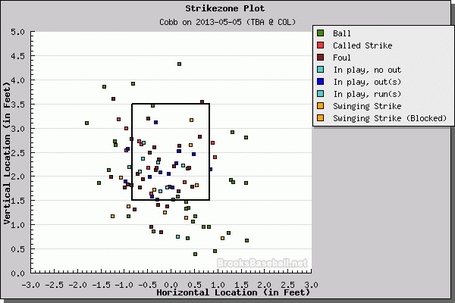 Compared to his last start in Kansas City, Cobb kept more of his pitches down in the zone, and some of them were downright filthy. There were really only three blaring mistakes with Cobb's pitches today and they all wound up as solo homeruns. Aside from that, Cobb was pretty dominant and he was getting really good movement on his offspeed pitches throughout the day. 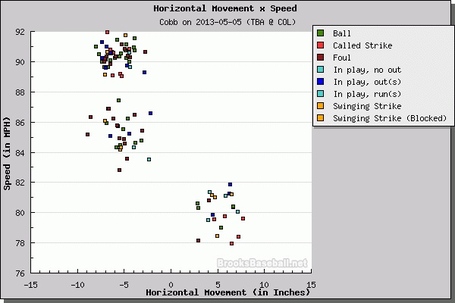 The bats were hot again yesterday as Eric discussed in the recap. Ryan Roberts needs to work on his "I just got a hit" bow and arrow celebration that all of the players have been doing lately. After his two-run double in the sixth inning, he just kind of pointed to the dugout instead of going through the full ‘load the bow, shoot the arrow’ motions. Compare it to Kelly Johnson’s from earlier in the inning after he plated Joyce on a single to right field.

With Ben Zobrist out for Monday’s game following the death of his grandmother and Yunel Escobar still out with a bruised hand after being hit by a pitch in Saturday’s game, we could possibly see Evan Longoria take on the role of shortstop. It’s pretty unlikely, but Joe Maddon did say, "I feel comfortable with Longo there, but I don't know how he's feeling necessarily," according to Owen Perkins of MLB.com. Zobrist will rejoin the team on Tuesday, and Yunel could be back in the lineup by the end of the Blue Jays series.

The Rays head back to the Trop for a ten-game homestand in which we’ll see the Blue Jays, Padres and the Red Sox. Jeremy Hellickson takes the mound tonight at 7:10 against Mark Buehrle. Both pitchers are looking for their second win of the season.

-ESPN had a hot dog vendor kayak out at McCovey Cove during the Giants-Dodgers game last night. Of course, people had to question the quality of said hot dogs.

-David Price’s struggles have drawn attention to his drop in velocity. Jason Collette of The Process Report takes a look at some data on Price’s velocity here.

-Bryce Harper was ejected from yesterday’s game against the Pirates in the first inning after arguing a check-swing on strike three. Video of his ejection can be found here.

-This fan was in attendance at yesterday’s Rays/Rockies game to show support for Troy Tulowitzki in quite a unique way.