The most dramatic game of the season, on Monday night, against a horrible Toronto.

Somehow, strangely, no regular season game has felt as important as this. And it didn't end well.

Share All sharing options for: The most dramatic game of the season, on Monday night, against a horrible Toronto.

Live blogging a game I plan to cover normally produces excellent notes to lean on for the game recap. Today, this game felt like the most important regular season game since 2011 for reasons unknown to me. In response, I'm publishing my notes in full.

Hellickson got through an easy first inning, allowing a two out single to Joey Bats but unscathed.

Jennings led off the bottom of the first with a single to left-center field that Colby Rasmus lazily let fall. Buehrle then caught DJ barely leaning off of first base with a shockingly timed and controlled throw, allowing Encarnacion to supposedly tag DJ as he was in the air, hand outstretched to first. Cork Gaines begs to differ. 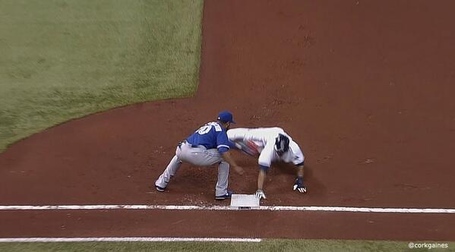 Johnson laced one through the right side (did I mention he was batting second?), Roberts worked a full count walk, and after a Longoria pop, James Loney faced a left handed pitcher! Rasmus caught the lazy fly this time.

No scores, move along.

Hellickson had three consecutive 3-ball counts to start the second inning, with only the third batter finding a walk. It was an aggressive strikezone from the umpire Mike Everitt this evening. I'll be a monkey's uncle if there were more than ten swings outside the zone.

In the third Hellickson found himself allowing two-out baserunners again, but Encarnacion popped out to Jose Molina on a 2-0 fastball, middle-middle, to end the threat.

In the Third inning, Sam Fuld lead off with a single. Against a southpaw. Throw your hands up, lets move on.

Jennings got on base, Johnson launched one, and the blast fell on the warning track behind a yet-again confused Rasmus. Maddon all but threw something on the field to get a review, and the umpires found no evidence of a homerun, so the play stood as far as runners advanced: Fuld scored, Jennings on second, Johnson on first. Ryan Roberts then reached on an infield hit to the pitcher, because batting Tatman in the top third of the order has been magical...

So with bases loaded, Evan Longoria did the most un-Rays thing possible against the horribly struggling Blue Jays and the nemesis Mark Buehrle: launched a grandslam (his first since 2009, the third in his career) off an easy pitch down the middle with no sink. A gift, making Longoria only the second current Rays player to hit a home run off of Buehrle (after Jose Molina in 2006). 5-0 Tampa Bay.

James Loney continued his hot streak by doubling to right field, and then Luke Scott launched a shot into the stands one out later off an easy breaking ball in the wheel house low and inside. That's three current Rays, and I'm way less bitter about that perfect game in 2009. Let the healing begin, 7-0 Tampa Bay.

Armed with a 7-run lead, Jeremy Hellickson picked the perfect moment to regress hard. It took 39-pitches to allow five base runners (including back-to-back two-out walks) and three runs before getting Bautista looking after a four pitch at bat that Joey didn't lift the bat off his shoulder. With two outs, he should have remembered you could drive a boat through this evening's strike zone. 7-3 Tampa Bay.

In what felt like an incredibly important fifth inning, the Jays went three-up-three-down, and Hellboy finished the inning strong with a 9-pitch inning, limiting the count increase to 101 through five.

Hellickson keeps the Rays' streak of consecutive GS lasting 5-plus innings to start the season alive. Now at 31.

Longoria led the bottom of the fifth with a fly ball that's certainly out in Coors Field last weekend, but off the wall in left today. Loney and Sean Rodriguez flew out to right, and during the latter at-bat, the currently injured Yunel Escobar put on his hat and glove and began pacing the dugout. Scott got a similar pitch to his homerun at-bat but watched it for a called strike at 1-0, eventually finishing the fifth with a groundout. Longo seemed irked, but the frustration seemed to be pointed inward after missing a second home run.

With Hellickson done a bit early, you'd think the Rays would turn to Cesar Ramos or Brandon Gomes, but with Jake McGee wavering in confidence lately, Jim Hickey et al gave the fireballer the nod against the weaker part of the order. Nice try, coaching staff.

Joey Bats singled up the middle, Encarnacion took a patient swing at a breaking pitch to lace one through the shift, and it's two on with no outs. Facing righty masher Adam Lind, Farnsworth worked low in the zone (in spite of today's wide strikezone) and after tempting Lind to go yard, got a groundball off the end of the bat to second base, where Roberts was able to field cleanly and send the ball home, catching Bautista advancing home.

One out, two men on base, and the bottom four of the lineup next in line. Hickey calls the spade a spade, notices the high leverage situation of this inning, and turns to Joel Peralta. Peralta started with Colby Rasmus and struck him out on a rising fastball, giving Rasmus 6 K's in as many tries against The Biceps. With Toronto's hopes on Maicer Izturis, Joey used a splitter for hard swings low in the zone ("playing pepper," said Brian Anderson), before finally returning to the fastball for an easy fly to center.

Oft used, but non-high leverage reliever Esmil Rodgers made his sixteenth appearance for Toronto, with the Rays bringing 2-3-4 to the plate. Johnson saw a bunch of breaking balls to the inside corner and eventually found one that didn't drop, working a single to right field. Ryan Roberts got worked by the wide strike zone for the first out, Longoria a fly to center, and Loney a tapper to the mound.

It's Monday, my heart is pounding over a Blue Jays team that was riding a 14-of-18 loss combination before this series, and it's still 7-5 Tampa Bay.

It's only the eighth? Escobar finally get his nod at short stop, returning from injury, and the first play is J.P. Arencebia, finally replacing the why-are-you-not-demoted Henry Blanco for Toronto, and knocked the ball off the top of Yunel's glove. Joel Peralta got the following out, but then had no mercy on the outside of the strikezone, eventually walking leadoff hitter Brett Lawrie.

One out, two men on base, and the top of the lineup next in line. Hickey calls the spade a spade, notices the high leverage situation of this inning, and turns to struggling closer Fernando Rodney.

He starts the at bat on the first base side of the pitching rubber, thankfully, and starts with a changeup to get Melky Cabrera swinging away. Confidence booster. The following pitch a double play ball makes his way to Yunel Escobar, and our definitely probably still injured short stop bobbles it.

Instead of escaping the inning on two pitches, the bases are loaded.

Bautista lines out to right fielder Sam Fuld, and one run scores and it's first and third. Rodney eventually works a bouncing and wild groundball down the thirdbase line that Longoria retreats deep in the infield dirt to find. He nabs it back handed with his left hand chest high, looking over his shoulder the whole way. Without time to plant his feet, Longoria quickly swings his arm for a dribbling throw to first, but the ball still hops in ahead of the runner.

The Rays send Escobar up to no effect, but Luke Scott drops a fly ball in shallow left field for a single. Jose Molina makes Rasmus run hard for a catch in the same place he both dropped and made a lazy catch earlier this evening for the second out. With Sam Fuld at the plate, Luke Scott attempts a steal and works a balk out of righty reliever Darren Oliver, who picked his leg up and dropped it again to pursue the Wolverine. RISP, back to Fuld, and he walks. Desmond Jennigns gets a difficult hopper to short, but the force out catches Fuld on a bang-bang play. Three outs.

Top of the Ninth

At this point everyone high leverage in the bullpen is spent. Groundballer Jamey Wright is available, but I don't trust Yunel today. Brandon Gomes is back there, but inconsistent. Cesar Ramos?

5-6-7 in the order remains in the way of the Rays winning a strangely important win. Rodney return to attempt the five out save, something he did twice in September last season.

A full count to Adam Lind ends in a walk, again the outside of the strikezone unrelenting in this at bat. (Food for thought: At this point Brian Anderson notices Rodney's leg has been leading his pitching motion on occasion.) Colby Rasmus follows with Emilio Bonifacio now running for Lind. After being checked at first by Molina, our catcher makes a short throw to second on a steal attempt and the ball skids up and off Escobar's glove. The runner is on third with no outs, follows with a 99 MPH fastball and a changeup to strike out Rasmus swinging.

Jamey Wright is warming up as Rodney works a hot grounder directly at James Loney. Steps on first, no problem. Izturis is out.

Arencebia is all that remains.

I can feel my heart beating in my chest. It's the regular season. #TheRaysWay

Molina drops a strike, but it's not a bad situation: 2-2 to Arencebia, and oh lord... it's hit hard. No. NOOOO! It's over the left field wall! What?

Rodney four pitch walks Mark DeRosa, and he's done too. 34 pitches and almost his former self.

After multiple pitches at Lawrie's head, Wright strikes him out swinging, and I'm in a daze.

Don't jinx it for us, Cason! Bring on the heart of the lineup. Kelly Johnson, Ryan Roberts, and Evan Longoria. Tell me that three weeks ago and I really do vomit.

Bottom of the Ninth

The Blue Jays closer arrives, the same reliever who has held batters to 3-for-33. He drops Kelly Johnson looking at an outside corner fastball that goes in his favor. The next pitch is a Ryan Roberts ground out to second on the following pitch. Evan Longoria? He grounds out as well. Matt Joyce was dressed for action, but he never got the call.

Over. The most dramatic game I've seen this season. I'm still in a daze. What just happened?

There's no excuses here, but let's see that strikezone:

Is it time to mix up the bullpen? Where do you find blame?

It's time to throw on some Kenny Loggins and drown my sorrows.

Oh, and how's that attendance doing?