The Rays and Bullpen Leverage

The Rays bullpen has done poorly this season. They need to pitch better, but are they being used optimally?

Share All sharing options for: The Rays and Bullpen Leverage

A baseball manager is at his most influential when coordinating his bullpen. Basic bullpen management is a simple concept, even if it's not always easy to execute perfectly. In a well-managed 'pen, the best pitchers should pitch in the most important situations (the situations most likely to influence the outcome of the game). Important situations are easy to recognize (tie game, bottom of the ninth, runner on third with one out and the like), but for us armchair analysts, there's actually a statistic that ensures we can discuss importance in precise terms. It's called Leverage Index, and FanGraphs has it listed for every player. A leverage index of one means that the play is of average importance. Less than one means that it is relatively unimportant, and over one means that it is very important.

Not including yesterday's game, here is the average leverage index for each Rays relief pitcher at the time he has entered the game in 2013. The third column is how the Steamer projection system thinks he will do going forward this season. This is an incomplete look, as it doesn't consider lefty/righty splits, but it'll do as a starting place for discussing Joe Maddon's (or Dave Martinez's, as Maddon keeps pulling himself early) bullpen usage.

*Steamer knows about a pitcher's fastball velocity and uses that to help decide what to regress him against. This is what makes it so good, but it probably also means that it overrates Jake McGee (a pitcher who's all fastball) some.

**Regression systems rarely know what to do with a player like Fernando Rodney. He was so good last year and so bad the year before. I think it's clear that he made real improvements last year, and that he's a better pitcher than his Steamer projection, so I have no problem with him getting the highest leverage appearances—he's exactly where he should be.

Looking at average can be misleading. One or two exceptionally high leverage appearances can distort the picture and obscure how a manager is using his players. Below I've graphed the number of appearances each Rays reliever has had in five leverage index buckets. Click on the graph to enlarge it for easier reading. 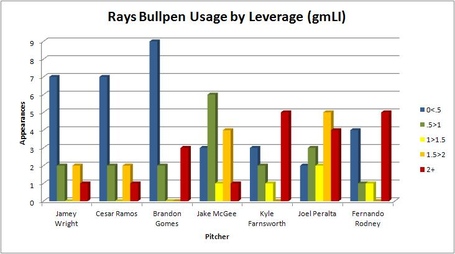 Now in the past, Joe Maddon has been pretty good at this, but I think there's something very wrong here. Kyle Farnsworth has the third highest leverage index of any Rays pitcher, and just as many extremely high leverage (2+ gmLI) appearances as Fernando Rodney (more than Joel Peralta). Once upon a time, not so very long ago, Farnsworth was a stud. He backed off from his fastball, expanded the use of his cutter, and started dominating hitters. Often he struck them out, rarely he walked them, and when hitters put the ball in play, it was usually a poorly hit grounder. So far this season, it looks like those days are gone. He strikes out very few batters, walks too many, and when he's hit, it's almost always hard. His fastball has mostly left him, he fails the eye test badly, and Steamer thinks there's no great bounceback coming. If Maddon and Jim Hickey think Farnsworth has some good innings left in him, by all means, keep him around. But the high leverage appearances need to stop.

Who should fill them? Well, Jake McGee is struggling too, so he probably needs to get himself right before being thrust into extreme pressure spots. My candidate is Brandon Gomes. He's looked utterly dominant so far this season, baffling one quality batter after another. So far he's striking out 36% of the righties he faces and 26% of the lefties, and he aces the eye test. If 26% isn't enough to convince you, there's always Cesar Ramos to spell him against lefties. He's looked sharp as well, and has struck out 20% of the lefties he's faced while only walking 7%.

Maddon has stated that he thinks all of the ingredients are already here for the Rays bullpen to be great. I don't disagree, but I do think Maddon needs to adapt and use those ingredients in a slightly different order.