Recapping the resurgence of Kelly Johnson

A few quick thoughts on Kelly Johnson, because I needed a reason to use this glorious picture of Johnson during batting practice from earlier this week.

Share All sharing options for: Recapping the resurgence of Kelly Johnson

Kelly Johnson has become a huge value-find for the Rays, and there's a ton of reasons Johnson has come out of relative stat-obscurity the last two seasons to become a darling again.

The younger Kelly Johnson -- you know, the one you would trade Aaron Hill for -- earned his keep as a left handed hitter who mashed lefties, notably rocking 153 and 149 wRC+ against lefties in 2009 and 2010.

After some horrid years in 2011 and 2012, where Johnson's wRC+ literally halved against southpaws, Johnson remained at least serviceable against right handed pitchers (with a 102 and 92 wRC+ in '11 and '12).

This year, after some adjustments at the plate, Johnson has exploited this more traditional skill set, and is currently boasting a 176 wRC+ this season against right handed pitchers, all this while staying eight points above average against lefties (108).

Oh, and Johnson leads was leading the team in wRC+ before the weekend series in Cleveland began, but now he's dropped to second place at 145. Let's delve into a few reasons why:

The first credit goes to Johnson himself, for trimming his strikezone by being more selective at the plate. Depending on which pitchf/x you're judging by, Johnson has dropped his O-swing rate 6-9%, while boosting his O-contact rate by 6-8%. Not only is his resurgence of pitch recognition a great thing for the Rays, but it is more than luck, too. His BABIP is twenty points above his career average at .329, but still ten points lower than Johnson's rather successful season BABIPs from 2008 and '10. Not a fluke.

Another reason that Johnson's success goes beyond luck is his hit placement. When Johnson has made contact this season, he has been rather intentional with pulling the ball, as opposed to hitting the ball evenly around the field, as seen in the graphs below.

Johnson is pulling just about everything, save a bunch of outs in the opposite direction that I have a sneaking suspicion came off weakly hit balls.

The other credit goes to the Rays staff and hitting coach Derek Shelton.

Johnson is aging, and he's not the player he used to be. If Johnson was going to find success, someone was gonna have to teach the old dog some new tricks. That manifested in his batting stance, which Tommy Rancel recently wrote about for ESPN's sweetspot. 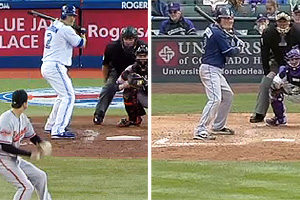 Rancel notes two items of particular interest. First, that Johnson has a revamped swing this season, and second, that Johnson is dominating breaking balls this year with a .300+ avg on those pitches (compared to the previous two seasons of .174 avg). Whether the latter is a credit to Shelton or Johnson is debatable, but its clear Johnson's pitch selection is driving his success, and that is supported by his open batting stance.

Whatever other reasons you might have for Johnson's success, please feel free to share. In the mean time, I'll continue to enjoy.

Hat tip to Sternfan1 for preaching the Kelly Johnson gospel when I wasn't having any of it. Sometimes, it's nice to be proven wrong.