Archer was making his season debut with the Rays and faced three batters in the 5th inning before being removed from the game with the Rays trailing 5-0. On the afternoon he completed 4 innings of work allowing the Indians 5R/ER on 7 hits including two home runs while striking out 4 and walking 3.

After a quick 1-2-3 inning in the first he issued a leadoff walk to Nick Swisher in the 2nd and left a changeup up in the zone that Jason Giambi deposited in the seats to give the Indians an early 2-0 lead (screen grab from MLB.com) 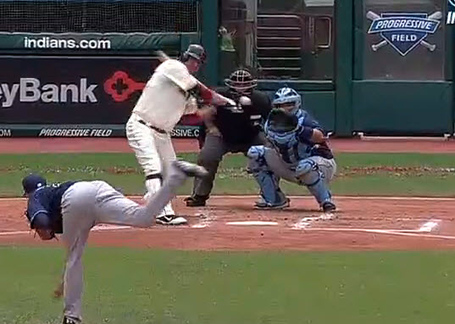 The Indians added another run in the 3rd on a double by Jason Kipnis who moved to 3rd on a ground out by Asdrubal Cabrera. Nick Swisher worked the count full and Archer had appeared to strike him out but the umpire didn't agree. The inning was extended for Jason Giambi who delivered with an RBI single to drive in Kipnis with the Indians 3rd run (from brooksbaseball.net). 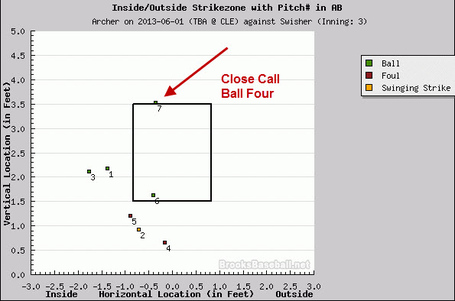 The Indians used the long ball to add two more runs against Archer in the bottom of the 5th to extend their lead to 5-0. Jason Kipnis led off with a single and Asdrubal Cabrera followed with a 2-run homer off another poorly located changeup to put the Indians up 5-0 (screengrab MLB.com). 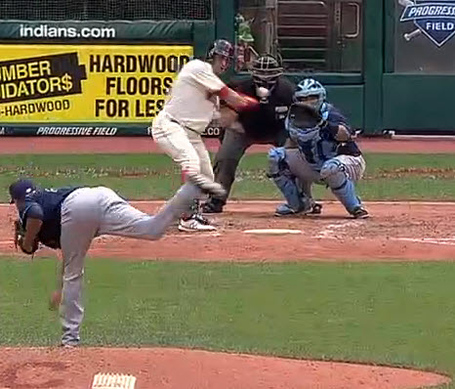 Following the homer to Cabrera Nick Swisher sent a line drive screamer back up the middle that glanced off of Archer and knocked him down. It was the 3rd time this season that he has been hit by a batted ball. After getting up and dusting himself off Joe Maddon went to the bullpen and called on Alex Torres.

Torres was once again brilliant in relief working the final 4 scoreless innings and saving the Rays bullpen after the long night last night. In his 4 innings of work he allowed only 1 hit while striking out 6 and only walking 1. Of his 52 pitches 35 were for strikes. He had 10 of 14 first pitch strikes and induced 11 swing and misses.

The Rays bats went silent in large part due to the effectiveness of Ubaldo Jimenez who mixed his speed, missed a lot of bats, and had tremendous location. He went 8 shutout innings and allowed only 4 hits and 3 of them were infield hits. He struck out 7 and issued only 1 walk. He threw a season tying high 108 pitches and 72 strikes including 13 swing and misses.

After the game Joe Maddon was asked whether or not Archer would make his next start and said,"No, we haven't even discussed that. There's no reason to think that he would not get that next opportunity." It's an understandable position as pulling the rug out from under Archer after 1 poor outing may not do too much for his confidence moving forward.

Of his performance Archer said "my fastball command really wasn't there - as consistently as I would like it, and if you fall behind a good hitting team then leave pitches up, you're going to get banged." As the screen captures above point out he certainly left a few pitches up and the good hitting Indians made him pay.

He looks forward to his next start and views it as a test saying "from the 2nd through the 5th was a battle but I think the true test is how do I bounce back. Do I let it get to me or do I come back and execute pitches better next outing."

The Rays were given a boost heading into the series final thanks to the stellar work by Alex Torres allowing the bullpen a day off which includes an important 2-day break for the back end guys Joel Peralta, Jake McGee, and Fernando Rodney.

James Loney also began contributing to tomorrow's game by making Indians closer Vinnie Pestano throw 9 pitches with 2-out and nobody on to push his pitch count up. Desmond Jennings followed Loney's lead and made him throw 6 pitches before flying out to end the game.