Baseball is a funny game. On any given evening it can surprise you and make you wonder if you really know anything.

Last night, the Rays best starter was rocked, giving up six runs before recording his first out. A six nothing defecit in the first inning is hard to overcome, yet the resilient Tampa Bay Rays clawed back twice but still found a way to let the game get away. Theres not many times you can say a team that trailed 6-0 after one should have won, but Monday was that kind of game. The star player's inability to plate a run in a bases loaded no-out situation was inexplicable, something that almost defied the imagination, but it happened, and that's baseball. It always finds a way to surprise you.

Making matters worse for beleaguered Rays fans was the Tuesday night pitching match up. Jon Lester, the Red Sox ace, was throwing for the bad guys, and he was being opposed by the ever-shaky Roberto Hernandez. A cursory look at the records and ERA's were all fans needed to feel uneasy about the coming night. Morning drive radio hosts and DRaysBay commenters all agreed that losing last night was compounded by the fact that the bullpen was now empty, and today's game seemed an extremely tall order. But we watch anyway, because the game still has to be played, and baseball will always find a way to surprise you.

At first pitch, the script began to read they way we expected it. Hernandez allowed back to back hits to open the first inning and just like the past two evenings, the Rays were in danger of facing a large deficit before they got their first at bat. With runners on the corners and nobody out, Dustin Pedroia hit a deep fly to right that Ben Zobrist would track down in foul territory, but despite a strong throw the speedy Jacoby Ellsbury would score easily. Sac fly, Rays trailing early again. As David Ortiz batted, Shane Victorino stole second base easily and the similarities to Mondays struggles were really starting to show. But suddenly it all changed. Hernandez struck out Ortiz swinging on a nasty little cutter, and then retired Mike Napoli to escape the first inning with just the one run of damage. 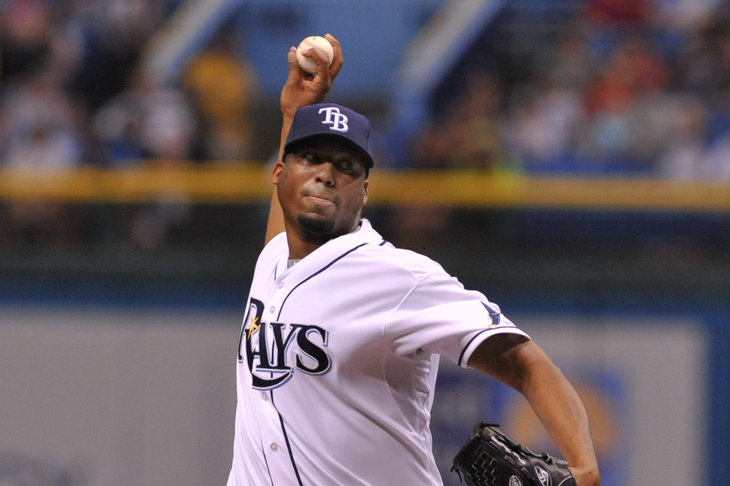 A comprehensive examination of Hernandez's season and how he projects going forward.

The Rays still had the tall order of hitting against Jon Lester, a task they have struggled with in recent history, including a dominant outing for Lester earlier this year in Boston. But Lester came out of the gates struggling. Desmond Jennings, returned atop the order, promptly singled on a slow ground ball to second base that Pedroia made an effort on but couldn't get the hustling Jennings. Sean Rodriguez followed with a walk. Three more walks to Evan Longoria, Yunel Escobar and James Loney tied the game at one and brought a mound visit from the Red Sox pitching coach. Lester was having difficulty finding the zone, especially with his off speed pitches that were all missing down and away. He would escape thanks to impatience at the plate from Ben Zobrist and Ryan Roberts who both swung at first pitches and created three outs.

Hernandez worked a 1-2-3 second but in the bottom half, Lester continued to struggle. Matt Joyce hit a long fly ball to the wall that barely missed the seats, but the next batter, Desmond Jennings, got all of a Lester fastball and deposited it into the Captain Morgan deck in left field to give the Rays their first lead of the series at 2-1. While the Red Sox were able to add two in the third inning on a two-out bloop hit by Mike Napoli, the Rays would refuse to go away as the offense continued to pile on Lester all evening.

Two more Rays runs were plated in the bottom of the third on RBI singles from Roberts and Jose Molina. In the fourth inning, Longoria launched a two-out home run into the first row in right field, extending the lead to 5-3. Hernandez was now fully settled in, pitching with confidence and making quick work of Red Sox batters. His off speed pitches and sinker were both working well, and he was keeping the ball down. They say the key to success for a Hernandez is to keep the ball down and he was magnificent on the night at doing just that. His change up was generating whiffs and creating awkward off-balance swings and when the Sox hitters did make contact, they were pounding the baseball into the dirt.

The fifth inning would see the end of Lester's outing. After retiring Loney on a sharp line drive, Lester issued back-to-back walks to Roberts and Molina. An inexplicable base-running gaffe helped Lester's case as Roberts found himself picked off second as Matt Joyce stood in the box. Joyce, now hitting with two-outs, made sure the Red Sox remembered plunking him last night by launching a monster home run to last row in right field and sending Lester to the showers. Joyce put his head down and jogged around the bases, resisting the urge to admire his blast--surprisingly, off a lefty. Jennings followed Joyce's home run with another of his own, a high shot to left, off reliever Jose De La Torre, extending the Rays lead to 8-3.

As the sixth inning came to a close, Hernandez had thrown over 100 pitches but had given his team a quality start that it desperately needed. However, his night was not done there.

Joe Maddon elected to stick with Hernandez for the seventh, and the gamble paid off as he worked a scoreless frame. Baseball surprised us again as Hernandez trotted out for the eighth inning, despite 117 pitches. Hernandez then plunked Pedroia on a 1-2 pitch and feigned some kind of reaction as the ball flew inside and connected with Pedroia's elbow. Though the drilling seemed innocent enough, I would not be surprised if Hernandez's over the top reaction to the mistake pitch was a cover for a bit of deliberate retaliation. Joel Peralta entered the game one batter later, relieving Hernandez after a gutsy and much needed performance. Peralta retired the next three batters, and Jake McGee worked around one hit to record a scoreless ninth inning, preserving the 8-3 victory.

My favorite highlight from the game though comes from Boston catcher David Ross, who in the seventh inning attempted to throw out Joyce stealing second and made the worst throw I think I've ever seen. So bad it brought out manager Jon Farrell to make sure Ross wasn't injured.

There were a few negatives for the Rays on the evening, despite the outcome. The team struggled mightily on the base paths on both side of the ball as Hernandez consistently failed to hold runners presenting easy base stealing opportunities for the Red Sox base runners. While Joyce did net a stolen bag in the seventh, two Rays base runners got picked off and found themselves in a run down after some poor reads.

Luke Scott and Kelly Johnson got the night off as the Rays faced a lefty for the first time in almost two weeks. Joyce got the start at designated hitter in a Danks theory type role, and the move paid off as Joyce hit the decisive blast that knocked Lester from the ball game. Sean Rodriguez made a beautiful diving catch in left field that should get some play in the SportsCenter Top 10 tonight.

The Rays will look to take the series tomorrow night as Chris Archer (1-1, 4.91) returns to the mound coming off a strong performance last Friday against Baltimore. The Red Sox will send Chicken Alfredo Aceves to the hill, filling in after scheduled starter, Franklin Morales, was used in relief during Saturday evenings marathon game.