A recap of the pitchers selected by the Rays in the 2013 draft.

Share All sharing options for: 2013 Rays Draft Recap: The Pitchers

Following the pattern of their recent drafts, the Rays preferred positional players early; only one of the Rays first six picks plays on the mound. However, the Rays still added some quality pitchers to their system, who are recapped below.

Analysis: When the Rays stepped up to the plate with the 21st pick and Stanek was still on the board, many hoped the Rays would choose him. Instead, they opted for Nick Ciuffo. It turns out that the Rays still managed to get the sliding pitcher as he went to the Rays at the 29th pick. Reasons for his slide are unclear at this point, which is a good thing. Stanek has two plus to plus-plus pitches, a 92-98 mph fastball with heavy sink and a mid-80s slider, that make him one of the best college arms in the draft. His change-up has improved to the point where it projects as average in the future. Keith Law also has him throwing a plus curveball, though none of the other reports are as optimistic about the pitch. Law's report also states that the slider and the curveball tend to run into each other.

Stanek's main problem, and the reason he could not get as many strikeouts as expected in college, is that he lacks pitchability. In his report, Keith Law says that Stanek needs to learn to pitch off of his fastball as well as prioritize his curve. Stanek needs a few tweaks to become a number two starter, but the Rays have shown the patience and ability to turn a raw power arm into a refined pitcher.

Baseball America Excerpt: "A tweak here or there could unlock Stanek's frontline potential, but other scouts see him as a future closer or set-up man in the Daniel Bard mold."

Analysis: There is not much information available about Woods. What little there is indicates that his fastball is in the high 80s to low 90s, touching 93 mph at its peak. Baseball America noted that his fastball is straight. He also throws a curveball and a change-up, with the curve flashing some potential. Jonathan Mayo commented that Woods lacks projection, though with the aggressive selection, the Rays may think differently. He did not make Baseball America's Top 500, but was rated the 16th best draft prospect in New York. 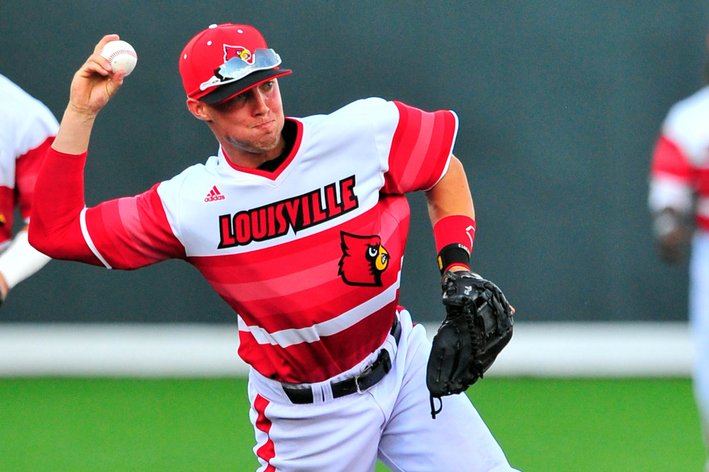 Analysis: A "helium" player, Ramirez has seen his draft stock shoot up recently, a result of significant progress and development this spring. His best pitch is his 88-92 mph fastball that he throws with minimal effort. His curveball is his best secondary pitch, and he also throws a change-up and a slider. Ramirez is considered a good athlete with a quick arm, hints that he may add velocity.

Analysis: A fifth year senior, Austin Pruitt is an undersized right handed pitcher who throws in the high 80s. A very successful pitcher in college, Pruitt commands his spike curveball, graded his best pitch, very well. He did not make Baseball America's Top 500.

Analysis: The young brother of Oakland Athletic's pitcher AJ Griffin, Aaron lacks an above average pitch but receives high grades for his pitchability. He throws a fastball at 88-91, a slurve, an average change-up, and a cutter. He did not make Baseball America's Top 500.

Described by John Sickel's as a strike thrower, Griset is more of an organizational player than a true prospect. Still, in the later rounds, players like Griset can help shore up the rotations and provide minor league depth. His fastball works in the high 80s, and he throws mixes in a solid curveball and a change-up.

A Tommy John "survivor," Schultz hurls a hard fastball that sits in the 92-93 range and touches 96-97. His slider and curveball are both considered good power pitches. He worked both as a starter and a reliever this season, with high walk totals a serious issue. One has to wonder whether there is much hope for improvement in command given his size and high-effort delivery.

A potential draftee last year, it is ironic that Fischer was not drafted after 2012's great season but was instead taken after this year's much weaker season. He missed playing time this spring with injuries and a school suspension due to academic issues. In his 20 innings, he walked 10 with a 5.75 ERA. An athletic pitcher, Fischer can get his fastball up to 90-91 mph.

There is little information available on Kimborowicz, but he did have an outstanding year with the Trojans, posting a 1.58 ERA in 34 innings. Look for him to be assigned to either the GCL Rays or Princeton if he signs.

A transfer from Oregon State, Sidhu's baseball career has taken a turn for the better with Sonoma State. Described as a hard thrower, Sidhu pitched to a 0.98 ERA in 82.2 innings with 93 strikeouts.

One of two William and Mary players selected in the 2013 draft, Farrell led the CAA with 116.2 innings pitched. His ERA was 2.70 as he went 11-3 on the year. He previously pitched in the bullpen, though his preference is to start.

A senior for the Iowa Hawkeyes, Hanse did not pitch well in 2013, going 3-4 in 46 innings with a 4.30 ERA and a 32/17 K/BB rate. Though reports on Hanse are hard to come by, the Rays probably saw something in his massive 6'7 frame. Perfect Game has him topping out at 88 mph in their events.

A local pitcher from St Leo University, Teasley was the workhorse of the team's staff, throwing 86.2 innings in the 2013 season with a 3.63 ERA. Like many of the other players in this range, there are no scouting reports to be found.

One of the Rays first signings, Speer struggled mightily in 2013 as he split time between the rotation and the bullpen. Overall, he went 1-8 with a 6.26 ERA.

A tall, projectable right handed pitcher from Pearl River Community College, reports on Talley are minimal. According to Perfect Game, he sat in the 87-88 range as a high schooler. Judging from his twitter feed, it appears likely that he will sign.

Another junior college pitcher selected by the Rays, Hyrum Formo pitched in 14 games, working 89.1 innings while allowing a 3.02 ERA. Baseball America rated him the 25th best prospect in Arizona while Perfect Game ranked him the 100th best junior college prospect. His fastball sits in the low-90s, and he has already signed with the Rays.

An undersized lefty, Derek Loera was a starter for Lubbock Christian, working 93.2 innings with a 2.98 ERA and 89 strikeouts. Again, there is little scouting information available.

Drafted by the Red Sox in the 32nd round last year, Wood turned down their offer and was picked three rounds higher this year. An athletic pitcher, Wood is projectable despite his average size. Earlier reports have his fastball in the 88-91 range with good run. At 19 years old, he is still young and has time to add more velocity.

Unfortunately, I could not find any statistics or scouting reports for Colton Reavis.

A native of Miami, Anthony Tzamtzis bounced in and out of an N.C. State rotation that features Carlos Rodon, a heavy favorite to be the top pick next year. In his 28.1 innings, he pitched to a 5.40 ERA with a 25/30 K/BB rate. As an undersized right hander with command issues and the lack of a quality third pitch, Tzamtzis profiles best in relief. His fastball sits in the 92-94 range, and he flashes a plus slider.

A better first base prospect out of high school, Cody Jordan found a home in Grambling State's rotation. He is a strike thrower who pitches in the 80s and mixes his pitches well.

One of only four high school pitchers taken in the draft by the Rays, Ryan Moseley is a much better prospect than his 36th round selection indicates. Rated the 217th best draft prospect by Baseball America, Moseley was a catcher for most of his youth, converting to the mound full-time this spring for the first time. Because of this, Moseley's inexperience and rawness are clearly visible on the mound. However, his pure stuff is enticing. His fastball sits at 91-93, and scouts believe that with his projection there is more velocity to come. His best offspeed pitch is a solid curveball, with a under-developed change-up his third pitch. A commit to Texas Tech, Moseley should be a tough sign, but if the Rays can find room in their budget, he would be a welcome addition to the Rays scarce pitching depth in the low minors.

If for nothing else, Johnny Meszaros is an interesting prospect because of where he is from. A right handed pitcher from Alaska, Baseball America rated Meszaros the top prospect in the state. According to Perfect Game, Meszaros works in the 86-88 range with his fastball, touching 90 mph. Meszaros also has a interesting past for those concerned with a draftee's makeup.

In the 2013 draft, the Rays selected 24 pitchers with their 41 picks. Of those 24 pitchers, four were from high school, three were from junior college, and the remaining seventeen were from college.

My early impression is that it was a poor draft for the Rays in terms of adding quality pitching prospects. Ryne Stanek is a great pick at 29th overall, but after that, there were few arms of present significance. Ryne Stanek should fit somewhere in the middle to back of the Rays top ten prospects. Roel Ramirez (round 8) and Ryan Moseley (round 36), if both signed, should receive top 50 prospect consideration. There are a few more interesting arms that you can envision making the majors such as Jaime Schultz and Hyrum Formo, but both need plenty of work and development to eventually fit into a major league bullpen. After that, there is not much to be confident in. A few years from now, this could look very different if a few guys break out, but right now, it looks like a weak draft class by the Rays on the pitching front.