It's all about the power.

Share All sharing options for: Can Luke Scott still hit?

At this point, it's fair to say that Luke Scott has been a disappointment. Signed to be the answer to the Rays perennial DH problems, Scott has rarely been healthy, and has hit about how we've come to expect Rays DHs to hit: below average. Admittedly, this is sometimes what you get when you sign aging, ailing players. Right now, he's playing a lot like Pat Burrell. But before we ship Scott off to win a title with the Giants, let's take a good look at just how broken he is or isn't.

Last year, Scott was just a touch below average with a 97 wRC+. For a center fielder or a shortstop that would be dandy, but a DH is expected to hit. So far this year he's been worse, clocking in with an 84 wRC+ in 132 plate appearances. That will lose him his job if it continues, especially with the outfield already crowded with players who are hitting, and Wil Myers on the way at some point. There are some interesting aspects to his decline, though, that are worth taking a second look at.

Scott profiles as a classic power hitter. Over his career, he's walked around 10% of the time and has struck out around 20% of the time. Those numbers are perfectly fine for a player of his type. And as often happens when players age, his strikeout rate has slowly crept up to where it now sits at 23%. Last year, though, Scott's ability to draw a walk disappeared. He walked only 6% of the time, the lowest mark of his career.

This year that ability is back. He's walking 12% of the time while striking out his normal 23%. Once again, there is nothing alarming about these numbers. If he were hitting for power they would be downright comforting.

Over the course of his career, Scott has been the epitome of the "professional hitter." He's done a very good job of taking pitches outside of the zone and swinging at pitches inside the zone. Last year, though, he lost his approach. According to FanGraphs BIS numbers Scott offered at pitches outside of the zone an extra 10% of the time in 2012. This year, he's fixed that problem, but in doing so he's become a bit passive, swinging at fewer pitches in the zone than he ever has previously. His contact rate is in line with the rest of his career, but he's essentially shrunken his zone.

Before I get to the meat of Scott's problem, let me make a quick note about splits. So far this season, he's posted a 124 wRC+ in 42 PAs against lefties and a 63 wRC+ in 90 PAs against righties. This is almost surely noise and should be ignored. Players don't suddenly lose the ability to hit opposite-handed pitching while mashing same-handed pitching. Scott has posted normal lefty splits over his career, and he should be expected to post normal splits going forward.

Right now, the biggest problem in Scott's stat line is his lack of power. His walks and strikeouts are fine. His batting average on balls in play (BABIP) doesn't scream that anything's weird. His approach is solid, if not as ideal as it once was. The problem is, when he gets bat to ball, it's just not going as far. In 132 plate appearances this season, Scott has posted a .117 ISO, far below his career rate of .223. Russel Carleton on Baseball Prospectus found that isolated power starts to stabilize (become more signal than it is noise) at 160 ABs. We're not quite there yet this season, but the difference from his career rate is large enough that we can safely say that there's something going on. 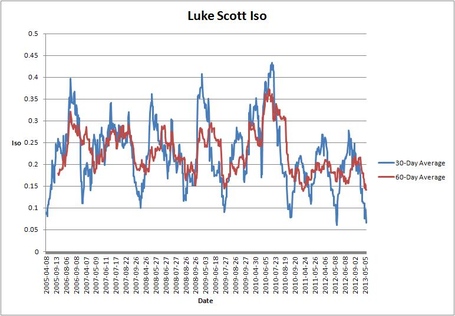 Brian Anderson is fond of saying that Luke Scott is a streaky player, and there's some truth to that. But it's also true that Scott seems to have settled in at a power level far below glory days when a good year made him the best designated hitter in the American League (2010), and a bad year was still scary for opposing pitchers.

I'm not in a position to say that the trend visible in my graph is an accurate projection tool. But I can say that Scott doesn't have an easy route to improvement. He doesn't appear to be getting unlucky, and there are no obvious fixes to make in his approach. He's just not hitting the ball as hard as he used to. Only Scott and maybe the Rays training staff can know for sure if he's likely to regain his thump, but he doesn't have a whole lot of time to do so. Wil Myers is coming, and at the moment, Scott is the weakest link in the Rays lineup.