Share All sharing options for: Wil Myers promoted by the Tampa Bay Rays

Tampa Bay's star baseball prospect, heralded in the top five of any national ranking you will find, is officially on his way to the Rays roster. Five games back in the AL East, the Rays will play three games in Boston and four games in New York in the coming week, starting with a double header on Tuesday.

To say the least, Wil Myers has been destroying the minor leagues. Myers hit his fourteenth homerun of the season in a three hit performance yesterday, and has raised his batting line to .283/.354/.514.

Myers started the season with a few struggles against same-handed pitching, something Rays de facto GM Andrew Friedman had chalked up to sequencing issues. There's some reason to worry that the 22-year old prospect will struggle making contact against Major League pitching, but with the Super Two deadline likely past, it's not enough to keep him in Triple-A Durham. The Oliver projection system and figures him for an above average .336 wOBA despite a high 26% strikeout rate (Oliver is highest on him, with ZiPS and Steamer slightly below). 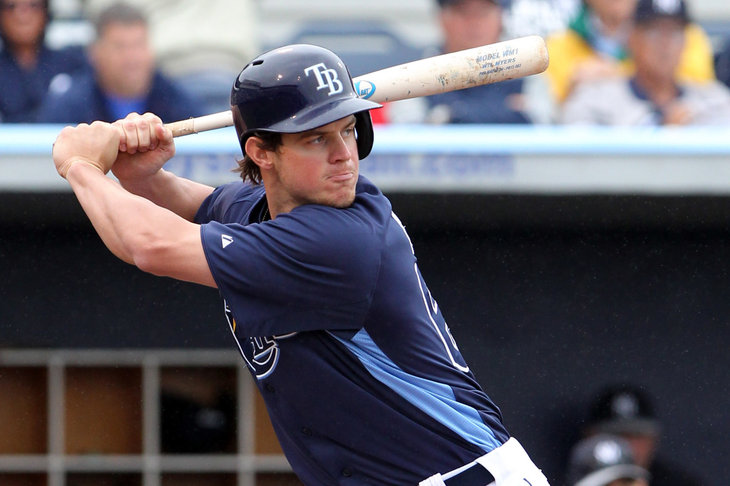 In a corresponding move, 2B/3B Ryan Roberts was optioned to Triple-A Durham. He was in competition with Sean Rodriguez for a utility role on the bench, but Rodriguez held the added advantage of the ability to play shortstop and the outfield well.

In our discussion titled The Wil Myers Decision, 42% of the DRaysBay community believed designated hitter Luke Scott was the odd man out, but Luke Scott will be given the chance to regain his power in more limited at bats from the bench.

Normally a place would have to be created on the 40-man roster before Myers could be promoted to the 25-man, but the Rays front office has had a slot on the white board titled "Wil the Thrill" for about six months now. They've carried no more than 39-players for the entire season just for this occasion.

Now about that extension...