Matt Moore improves to 9-3 on the season as Rays defeat Yankees 8-3. The offense is heating up with 29 hits in the past two games!

Last night’s 8-3 victory over the Yankees showed more of the Rays offense that we love to see. The team managed 14 hits, a day after racking up 15 hits in Boston. Longoria homered twice to right field and Escobar knocked one deep to centerfield. Not only did the offense stay hot, but the pitching did as well.

Matt Moore improved to 9-3 on the season, earning his first win in over a month. Moore went 6.1 innings, allowing four hits and three earned runs while striking out four and walking three. The fifth and sixth innings proved to be a little shaky for Moore, but he looked great in innings one through four. 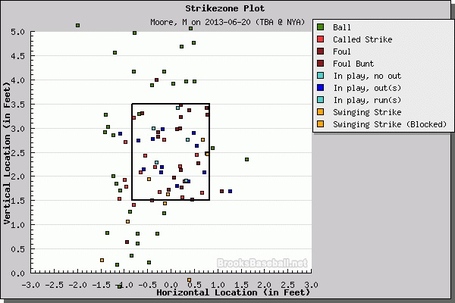 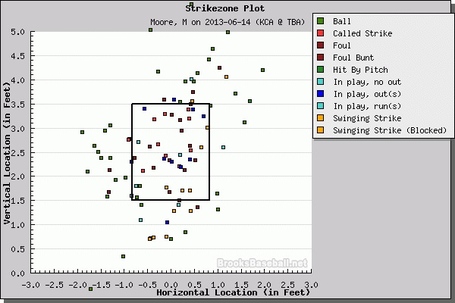 Per BrooksBaseball, those are Matt Moore's pitches in his last two starts. As you can see, last night Moore was exploring the left side of the plate more than his last outing against Kansas City on June 14th.

According to BrooksBaseball, in Moore's outing against KC, he threw 52 sinkers and nine fastballs out of 100 total pitches. Last night, Moore threw 59 fastballs out of 99 total pitches without throwing a single sinker. 59% of his fastballs were thrown for strikes last night with an average velocity around 93.6 MPH. Moore also found success with his slider last night, throwing 17 of 27 for strikes, five of them swinging.

Hopefully Moore's slump is in the past and he can pick back up where he started the season. Assuming there's no rotation shuffle, his next outing should be against the Blue Jays at the Trop.

For more on yesterday’s game, you can read Erik’s recap here. Also, Ian took a look at Matt Moore and the sophomore slump yesterday that is definitely worth a read.

Other Rays odds and ends:

Stu Sternberg was on hand for the game last night at Yankee Stadium. Bill Chastain of MLB.com talked with him about his feelings on the Rays’ season. Sternberg told Chastain, "Before the season I thought we could count on our defense. It's been there. Everything else has been topsy-turvy."

The Charlotte Stonecrabs were rained out last night, so today will feature a doubleheader in Bradenton. David Price will pitch the first game at 5 PM.

Mark Topkin of the Tampa Bay Times reported that the Rays have reached deals with their first-round draft pick, Nick Ciuffo, and fourth-round pick Kean Wong. Topkin said Ciuffo is most likely to join the Gulf Coast League team in Port Charlotte.

Per Roger Mooney of the Tampa Tribune, the Rays are calling up Alex Colome to start Saturday’s game against the Yankees. (Shocker!)

-It was 90’s night at the Durham Bulls game, so they re-created CD covers for each player. You can check their twitter recent images (@DurhamBulls) for all of them, but here’s the clear winner:

-Nice try Rangers, but the Rays beat you to this already this season.

-Jose Molina was used as a DH last night which left most Rays fans scratching their heads. Tommy Rancel of The Process Report wrote about Maddon’s moves during Wednesday night’s game at Fenway.

-J.A. Happ has started throwing off of the mound without a knee brace and is eyeing a return to the Blue Jays around the time of the All Star Break.

-Former Ray, Carlos Pena, hit a walkoff no-doubter into a group of scared children at Minute Maid Park yesterday in the Astros’.

-While we’re talking about the Astros, starting pitcher Bud Norris recently said that he would love to play in the Bay area if the opportunity presented itself to go and pitch for the Giants. Bo Porter went on MLB Network Radio yesterday to discuss Norris’ comments, which you can listen to here.