The Rays Tank: Hellickson Picks Up Third Win of the Season

Jeremy Hellickson improves to 3-2 on the season as the Rays defeated the Indians 11-3, taking the series in Cleveland.

Share All sharing options for: The Rays Tank: Hellickson Picks Up Third Win of the Season

Thanks to some hot bats and a decent outing by Jeremy Hellickson, the Rays defeated the Indians 11-3 and took the series in Cleveland. Yunel Escobar and Evan Longoria both homered, and everyone in the Rays lineup, with the exception of Luke Scott, reached base safely yesterday. Gareth takes a look at our offensive showing in the game recap here.

Jeremy Hellickson picked up his third win of the year, and the first win in two weeks for him since May 17th in Baltimore. Yesterday, Hellickson only went five innings, allowing nine hits and three earned runs. It was the fourth time this year he pitched only five innings. Hellickson left the game after throwing 82 pitches, 57 of which were for strikes, per MLB.com.

Hellickson had a pretty successful day with his changeup, throwing 20 of 25 for strikes, per Brooks Baseball. His fastballs averaged 91 MPH with a maximum velocity of 93 MPH. Overall, it was definitely one of the better outings we’ve seen from Hellickson this year and I’m glad the offense was able to provide enough run support to get Jeremy his third win of the season. 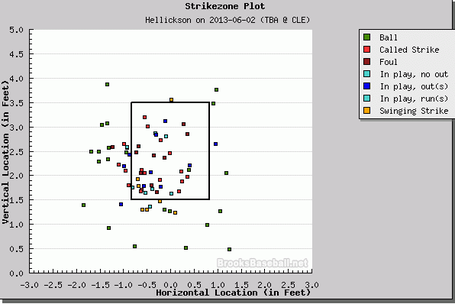 Joe Maddon told reporters after the game that he pulled Hellickson after five innings because he didn’t want to push him, and Farnsworth, Peralta and Rodney all needed to pitch before heading into an off-day. It’s also worth nothing that at one point, Roberto Hernandez was warming up in the bullpen, but was ultimately not used in relief.

It was nice to hear that Yunel Escobar went to Maddon after the game to apologize for not hustling. Even though at that point in the game we were already up 7-3 and would wind up scoring four more runs in that inning, I can definitely appreciate that gesture from Escobar.

The Rays are off today, but take on the Tigers in Detroit Tuesday-Thursday. Per Roger Mooney of the Tampa Bay Times, the Rays will send Moore, Cobb and Roberto Hernandez to the mound this series. Anibel Sanchez, Doug Fister and Max Scherzer will pitch for the Tigers.

Mooney also mentioned that Price was progressing from his triceps injury, throwing the ball from 105 feet yesterday. <blockquote class="twitter-tweet"><p><a href="https://twitter.com/search/%23Rays">#Rays</a> Price up to 105 feet in long toss. Should throw bullpens during next homestand. Team hoping to get a few starts from him before ASB</p>&mdash; RMooneyTBO (@RMooneyTBO) <a href="https://twitter.com/RMooneyTBO/status/341305204219736064">June 2, 2013</a></blockquote>

-Craig Albernaz of the Durham Bulls turned an amazing double play Saturday night that is definitely worth watching:

-New Era Caps posted a sneak peak of the 4th of July ‘Stars and Stripes’ hats that each team will be wearing. I’m not a huge fan of the gray for the Rays, but we are the away team, so that’s what they’ll get.

-Yadier Molina went ballistic on umpires yesterday after getting called out at first base. He looked out to me but it was definitely a close call.

-Jayson Stark of ESPN.com takes a look at the homerun heroes of 2013 so far. Kelly Johnson gets a mention as a most unlikely leader in homeruns for the Rays.

-While busy losing to the Houston Astros, the Los Angeles Angels of Anaheim managed to set a Guiness World Record for ‘Most People Wearing Wigs’. They’re also on the verge of being swept by the ASTROS, but at least they’re world record holders!

-MLB Fan Cave Dweller April Whitzman stumbled across this video of Southhaven pulling off an impressive pick-off move during the MHSAA Class 6A Championship Series.

-Garrett Jones of the Pirates hit an absolute moonshot out of PNC Park yesterday that landed in the river. He became the first Pirate to ever land a homerun in the Allegheny River on the fly. I would’ve jumped in and got it.

-The Yankees and Red Sox are in need of thunderbuddies, as illustrated by these gifs. The game was called midway through the sixth and the Red Sox won 3-0.