Ozzie Smith, my youth, and Topps Baseball cards bring back a slew of great memories.

When I was a child growing up in Cleveland Ohio there was always a nervous anticipation in early February as I walked to the corner drug store with my father and the family dog. The anxiety was created out of the excitement of knowing that the new Topps Baseball Cards would be coming out very soon. In the late 70's and early 80's there wasn't a known release date, I had no idea what the cards would look like, all I cared about was opening those wax packs, chomping on the gum, and shuffling through the pack to see if I got any of Indians or one of my favorite players. 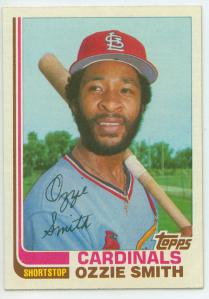 Each and every year one of the first cards I would want to get was my favorite player, Ozzie Smith. Although he wasn't a member of my beloved Tribe he was the guy that I thought I could be. In middle school I was one of the smallest kids in my grade and like Ozzie, my power alley was located somewhere right over the shortstops head, so I gravitated more toward the glove men in major league baseball and there wasn't a better glove man around than the Wizard of Oz.

We had a game that some of the guys would play called amazing catches. One kid would hit grounders or fly balls to the left or right of the fielders. I'd spend my time in the infield tracking down groundballs to my left and right and throwing what I'll describe here as a rocket (more likely a lollipop) to nail the imaginary runner. The whole time humming the music from This Week In Baseball's amazing plays segment.

Trading baseball cards was standard practice back in my childhood and never was the cards dollar value the main attraction to the trade. The circle of card collecting friends knew which players were valued by each member and the trade negotiations often bordered on the absurd.

The quest to obtain the card of the player you liked as well as to get the cards that others coveted extended far beyond the local drug store. The goal was to find a store that carried the cello pack (clear cellophane wrapped cards). If you were really lucky you may find the 3-pack strip of cello wrapped cards on display in an aisle.

With clear cellophane wrapping you had the ability to see the top card and bottom card of each pack. They were slightly more expensive then the wax pack but if you were to get to a store such as Gold Circle at Severance Mall before the local competition you'd have all the time in the world to rifle through (well, until the store staff came and yelled at you) and get the best of the best off the shelf.

The exhilaration of being first to a freshly laid out cello pack was an amazing feeling but to find the card you were looking for at the top or bottom of one of the packs was the cherry on top. It's a foggy memory as to whether getting the player I wanted most (Ozzie Smith) or the player coveted by one of my neighborhood rivals was more desirable. Knowing my personality I wanted the card coveted by my rival as leverage as well as to hold bragging rights until either he broke down and met my demands or acquired the card through other means.

Looking back on my youth the game of baseball wasn't spread through cable television or the internet. The players faces became known during the spring time when rifling though the Topps Baseball Cards. I'd commit the statistics to memory and have my father quiz me as I ate my morning cereal. I can still hear my mother saying "If you'd only spend half as much time on your schoolwork as you did with those baseball cards...." and I'm sure I'm not the only one to hear that line uttered from a parent.

Topps Archives Baseball is a celebration of the 70s, 80s and 90s, what many consider to be the glory years of card collecting. If you collected Topps Baseball Cards during these years then you will love Topps Archives Baseball. Look for autographs and memorabilia cards from today’s stars and your favorite retired players on classic Topps card designs.