Tampa Bay Rays and the AL East: The Next 14 Days

14 games until the All Star break, and we're sitting pretty. Can the Rays take hold of the AL East?

Share All sharing options for: Tampa Bay Rays and the AL East: The Next 14 Days

There are no guarantees in baseball, it's why we generally use 5 or 7 game series to determine winners in the playoffs. Any day a guy like Dallas Braden or Phil Humber can throw a perfect game. That acknowledged, the Rays have a gift of a schedule heading into the All Star break.

The Rays will play four games in Houston -- an incredibly short road trip -- before returning home to face the White Sox for three, Minnesota for four, and Houston three more times. These are three teams well below .500, and among them only the Twins are not in the bottom third of the league in runs scored.

Here's a breakdown of where each of these teams stand on July 1st:

There isn't much to be said as a positive about Houston or Minnesota. The Astros have a perchance to hit for power, which may or may not show up in Minute Maid Park this week, but should otherwise fall silent. Houston does bat well against lefties on the mound, and the Rays will start plenty of those, but the lackluster pitching should be enough for Tampa Bay to take advantage. Either way, if the Rays can't find a series win in Houston, we'll have more than enough grumbles from the twittersphere.

The Minnesota bullpen has performed well, featuring a 77.9% LOB rate, and has 47 holds on the season tied with the Astros for the third most on the season, though both teams are getting tons of chances. Houston has used their relief pitchers on average 3 1/3 innings per game, while the Twins average closer to 3 2/3 innings. In other words, their starters are pitching well when they make it to six innings.

The White Sox have a decent pitching staff, anchored by the awkward Chris Sale, who owns an ERA and FIP both beflow 3.00, and reinforced by Jose Quintana (93.0 IP) and Jake Peavy (3.74 FIP, the only other one below 4.00). I would expect John Danks to pitch at a similar level to Peavy moving forward, but he hasn't found success. His last outing lasted 7.1 innings with seven K's, seven hits, no walks, and only three earned runs but he still drew his fifth loss in six decisions since recovering from injury.

The Rays will face Sale and Danks this weekend, but not before Dylan Axelrod (4.57 ERA, 5.17 FIP), who has minimal stikeouts but fewer walks. Starting Hellickson, Moore and Price, the Rays could take two of three easily.

The White Sox are one hold shy of the most in the majors at 49 while averaging less than three innings for the bullpen per game, which is a bit more indicative of great bullpen use, even if the peripheral stats may be vague on supporting that claim. Nothing about their relief core popped out to me as spectacular, but the Chicago bullpen has the highest fWAR on the season at 4.1.

Paul Konerko is likely to return shortly before the Rays series, the Twins have a decent OBP, and that's about all I'm worried about offensively over the next fourteen games.

All that is to say, after taking two in New York, two from Toronto, and two from Detroit, the Rays can hopefully coast through a few more easy series victories until the All Star Break. 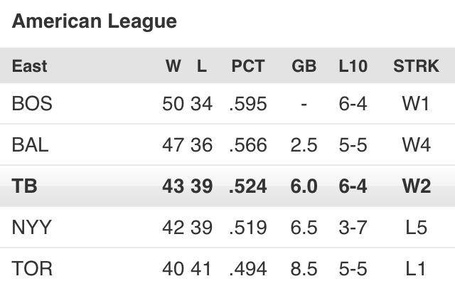 For context, the Rays have now pushed into third for the division. They sit six games back from the Red Sox, but only three games back from the Wild Card qualifying Orioles. The Yankees are in fourth, the Blue Jays in fifth, and not all of these teams have as easy of a draw these next two weeks.

The Orioles, coming off their dominating run against New York, will face the hardest draw: starting with the weak side of the White Sox pitching staff, they will play three more against New York in Yankee stadium, then host four against Texas, and three against Toronto.

The surging Blue Jays host the Tigers for four games (and could easily split the series by winning until Scherzer and Verlander), then play Minnesota, fly to the AL Central leading Cleveland, and then the aforementioned Orioles.

The Red Sox host three games against the .500 Padres (who are all offense and facing Lackey, Lester and Webster), before an AL West road trip against the Angels, Mariners, and Athletics.

The only team I'm expecting to not draw even or worse may be the Yankees, with their seven against the Twins. This is a key opportunity for the Rays to surge forward in the division and take an easy 10 wins over the next two weeks.