The Tampa Bay Rays and the Trade Deadline: Why not, and "What if?"

It's that time of year where we waste a lot of time discussing trades that will never happen.

Share All sharing options for: The Tampa Bay Rays and the Trade Deadline: Why not, and "What if?"

The Rays have made two trades at the deadline under the Andrew Friedman regime. Let's start there.

The first was Chad Qualls, an okay reliever, who may or may not have had a hand shake agreement to walk away from a qualifying offer from the Rays the following season.

Qualls filled the void left by Grant Balfour's injury leading to the 2010 playoff push, and was quite serviceable. After the season he signed with the Padres, which gave Tampa Bay a bonus pick in the draft. In other words, the Rays had an injury, and that instigated a trade -- but it really wasn't about Chad Qualls, or the PTBNL they sent to the Diamondbacks. At the time most of us were calling for Jake "Clockhands" McGee's promotion to the Show. No, this was all about the draft pick.

The real cost for the Rays was Player to be Named Later Matt Gorgen (RHP, recently demoted to Double-A), and some financial investment. The Rays used that supplemental draft pick on Palmetto HS oufielder Granden Goetzman and signed him for $490,000. Combine that with the salary of $1,480,000 paid to Qualls to finish the season, and that's an investment of $2M for a few months of a probable fireman and an injured prospect. Goetzman was diagnosed with a stress fracture in his back, possibly dating back to high school, shortly into his second season in Princeton. He returned this season with HIgh-A Bowling Green, but was sent back to Low-A Hudson Valley, where he's batting .206.

Ryan Roberts deserves a spotlight after his multi-homer game in Houston last night. The Tatman was the other acquisition by the Rays, claimed off waivers last season -- and again, it was a move forced by injury. Evan Longoria's hamstring and a slew of other Rays had found their way to the disabled list, and again the Rays were able to call upon the Diamondbacks for reinforcement.

The off-the-bench third baseman cost the Rays a second base prospect named Tyler Bortnick (who has yet to excel at the Triple-A level), and the Rays earned an extra option year by keeping him this season. There was a time when Roberts entertained quitting the game he loves due to so many demotions to the minors.

Lucky for the Rays he's stuck around, even after being sent to Triple-A earlier this season to make way for Wil Myers. He's decent depth, should Evan Longoria lose his current bout with plantar fasciitis, as he showed with his two home runs yesterday after getting another call; unfortunately, his option was exercised again this afternoon.

So what do I expect the Rays to do this season? Absolutely nothing.

If history has taught us anything, Andrew Friedman seems only prone to make a move when an injury necessitates a move. When Pat the Bat struggled, when Alex Torres is pitching out of his mind, when the bullpen could use just one more piece, the Rays will do nothing -- mostly because the front office can already trust this team.

The Rays have been better prepared to survive injury this season (they've stayed three games out of the wildcard even after losing three starting pitchers to injury, including an Ace and a Cy), and even if they acquired a world beating position player today, there isn't a natural need. Sure, any team can make room for Giancarlo Stanton, but that doesn't mean the Rays are desperate, not at the cost of mortgaging the farm. 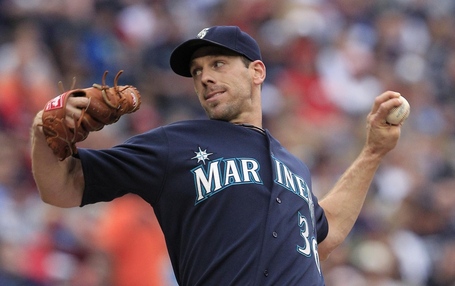 The most difficult aspect of sitting on your hands at the trade deadline is not the patience.

Because sometimes that All-Star player does become available, and he goes for cheap. My biggest "What if" may forever be not trading for Cliff Lee with the Mariners in 2010. The time I thought a legit superstar had fallen into all of baseball's lap, and no one got greedy. That season, the Rangers gave up Justin Smoak, Blake Beaven, Matthew Lawson, and Josh Lueke for Cliff Lee, an injured Mark Lowe, and cash.

Lee was owed $4 M to finish the year, and would be walking at the end of the season, which under the old CBA would have given the Rays two more supplemental picks in the 2011 draft (no. 33 and 37).

Obviously, Justin Smoak has not panned out the way he'd been hyped, but what if the cost was Desmond Jennings and Wade Davis? Would you have pulled the trigger?

Somewhere, in another universe, there's a Tampa Bay Rays team that wasn't slaughtered by Cliff Lee in two of three games against the Rangers. Quite the opposite. It's a championship team that may have lost a great prospect in Jennings, but today would be starting Brandon Guyer in center field, just beneath that illustrious banner:

I'm using a creative license to re-write history, to be sure, and making light of a far more complex situation, but I couldn't shake the disappointment throughout the 2010 ALDS that if the Rays had been the team with Cliff Lee, there would be a ring on every finger in the front office.

We'll get into rumors and propositions down the road, but I felt it important to lead with a simple reminder:

The Rays don't do anything mid-season unless they have to. (Forever, and always. Amen.)

Meanwhile, feel free to share your what if's, and why the Rays should make a deal this season, below in the comments.