David Price will make his third rehab start today against triple-A Houston. Ryan Roberts has been optioned to Durham. In his first rehab start with single-A Charlotte, Price had pitched only two and a third innings while allowing two hits, walking two, and striking out two. His second start for Charlotte was better. In it he threw 72 pitches in five innings, striking out eight while giving up two hits and one walk. He reportedly reached 95 mph with is fastball.

I would keep expectations low for Price in his first start back. My first line isn't just a dig at the Astros. The Rays are notoriously careful and the bullpen is fresh. I don't expect Price to reach 100 pitches, and he definitely won't go much over. Still, it will be good to see the 2012 Cy Young award winner again, regardless of how the start goes.

Velocity, movement, command are what to look for. Before being placed on the DL, Price's velocity was noticeably down. 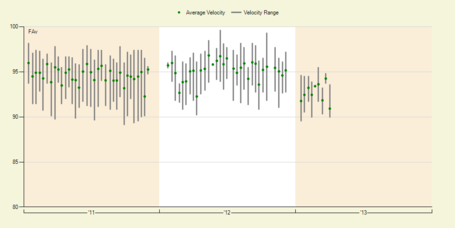 We'll be sure to check on the PITCHf/x data after the game.

According to Joe Smith of the Tampa Bay Times, Ryan Roberts has been optioned to Durham to make room for Price. That likely means that Evan Longoria will not hit the disabled list.

I like Roberts, and last night he seemed genuinely sad to return to the minors. Still, after last years infield horror, I can't help but smile at this display of depth.