Chris Archer had another solid start for the Rays and Fernando Rodney closed the game by shooting the moon, resulting in a SWEEP of the Blue Jays.

Share All sharing options for: The Rays Tank: Archer(y) Saves the Day

The Rays earned another series sweep as they defeated the Toronto Blue Jays 4-3 yesterday despite a very nerve-wracking ninth inning. Coming off of his first shutout, Chris Archer worked his way through seven innings allowing only one earned run on five hits and four walks. Archer improves to 5-3 on the season with a 2.76 ERA.

Archer discussed his outing with Todd Kalas after the game and said that it was "refreshing and easing" that Joe Maddon left him in the game both during the bases loaded jam in the sixth inning and then after the lead-off walk in the seventh. Archer said "Now I know that in a close ball game, Maddon is comfortable leaving me in. It’s comforting to know that."

Maddon also displayed confidence in Fernando Rodney to close the game despite allowing the first three men to get on base via a walk, single and then a double, which scored two. The pitch sequence in the leadoff walk to Josh Thole was most troubling to watch. Thole is batting .146 on the season (16 games) with only one extra base hit, so why on a 3-2 count was Rodney throwing a change-up in the dirt? 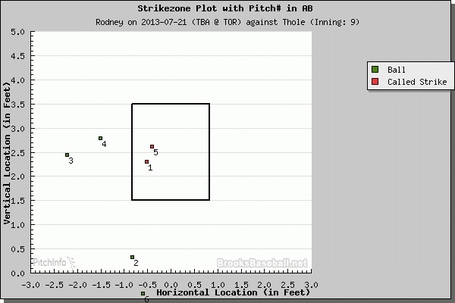 Regardless, the Rays got the win and will now head to Boston for a four-game series against the first place Red Sox. For more on yesterday’s victory, you can check out Gareth’s recap here!

Matt Moore will face Brandon Workman tonight in Boston. This will be Workman’s second career start and third appearance for the Red Sox this season, and his first outing at Fenway Park. On July 10th, he threw two innings in relief against the Mariners and allowed three earned runs off of four hits while also collecting four strikes outs. Then in his start on July 14th, Brandon went 6.1 innings against the Athletics allowing only two earned runs off of two hits and a walk while striking out five. He also didn’t allow a hit in that game until the sixth inning. Per MLB.com, Workman is 8-2 in the minors this season with a 3.21 ERA and an opponent’s average of .243 in 17 appearances.

-Wil tweeted this after yesterday’s game in which he sat out due to the wrist soreness:

-In yesterday’s post-game press conference, Joe Maddon told reporters that Yunel Escobar will be a game-time decision and if Yunel can prove to him that he is 100%, then Escobar will find himself back in the lineup.

-Per Roger Mooney of the Tampa Tribune, Maddon had this to say about yesterday’s win

-Here’s a .gif of Archer’s wonderful pickoff attempt on Jose Reyes from yesterday’s game, courtesy of Hardball Talk. How did he manage to keep his hand on the base?!

-Drew Silva of Hardball Talk also talked about yesterday’s win and the Rays being the hottest team in baseball right now.

-Carlos Pena was DFA’d by the Astros yesterday and is hoping to get swooped up by another team so that he can continue his career.

-Hello younger, male version of me! This child came to the ballpark prepared and wound up with a souvenir.

-Ben Lindbergh of Baseball Prospectus believes that David Price is a riser and James Loney is a faller in the second half of the season for the Rays.

-Clay Buchholz will be visiting Dr. James Andrews for a second opinion on his shoulder discomfort. Andrew Bailey will undergo season-ending shoulder surgery which will have a recovery period of twelve months.

-If you have MLB Alerts turned on within your Sportscenter app on your phone, prepare to continue to be overwhelmed with A-Rod rehab updates! There is currently no timetable for Rodriguez’s return as he strained his left quad in what should have been his final rehab appearance. *Cue Cashman telling me to shut up*