The Rays and the Four Man Rotation

The Rays have a very strange schedule coming up, and using a four man rotation may prove to be advantageous.

Share All sharing options for: The Rays and the Four Man Rotation

The Rays received a bit of a gift headed into the All-Star break, facing a bunch of sub-.500 teams, but just as forgiving as the schedule was before the Break, it's coming back to bite the Rays hard.

The win streaks have lit a fire under Tampa Bay, and they've been rolling with two big wins in Fenway backed by extremely good pitching from Moore and Price. Fausto struggled after a bit too much rest, but Cobb is on the way back. The starting pitching is well rested and in rhythm, but that is about to get screwed up.

An AL East roadtrip -- featuring three in Toronto, four in Boston, and three in New York -- followed by the weirdest stretch of off days I can remember. As things were scheduled, following the series in Yankee Stadium, the Rays will had been set for five "off days" within the first month after the All-Star Break.

From there, everything settles down: Starting Tuesday, August 13th, the Rays will then play nine games without any breaks in the rotation. The only off days remaining in the season would be Aug 22 and Sept 9, with the final regular season game in Toronto on Sept 29.

But back to the issue at hand.

A pitcher normally rests four days between starts (a practice even referred to as "normal rest"), but the upcoming schedule was going to make that difficult with pitcher rotations being offset multiple times within five game stretches. Now things have actually gotten worse.

As fate would have it, the rain came on Thursday. Hellickson's start to end the four game series in Fenway last night was scrapped, and the Rays had to reschedule the final game in Boston for Monday -- moving one of those five off days even earlier in the rotation, and forcing the starters into five days rest earlier than expected.

The Rays have may have a problem.

How should management respond to all these days of rest?

Using the current rotation schedule, this will be the consequence of doing nothing:

If the Rays pitchers skipped no starts over the next three weeks, each pitcher would have been set to throw two games on six days rest. It's normal for a pitcher to go five days between starts, but six is a bit extreme, and especially with such frequency.

This rotation has already shown cracks when days of rest are thrown off. Moore fell apart for three straight appearances after pitching on three days rest earlier this season, leading to his only poor stretch of the season, and Hernandez looked simply weird on Tuesday night in his return from the All-Star break (nine days rest).

So should the Rays keep the rotation in order? This seems like a bad idea. Altering a pitcher's approach could get very, very messy. Here's a few different theories for approaching the rest dilemma.

An interesting theory would be to allow starters to pitch on a regular schedule to maintain only five days rest along the way, but preventing six day rest rotations. This would give the starting rotation some semblance of normalcy over this weird stretch.

Let's run through the rotation again, but this time preventing six days rest:

This method provides the most opportunity for starters to pitch on five days rest, if you think that's a good thing, with simulated games and normal rest marked in bold to keep the rotation on track.

The issue here is the cost of losing two starts. In this version, that means losing one start from Archer and Moore. Why waste a start by either pitcher. Moore is on fire, Archer is trending up.

Surely there's another way to find normal scheduled rest while getting the most out of the rotation. 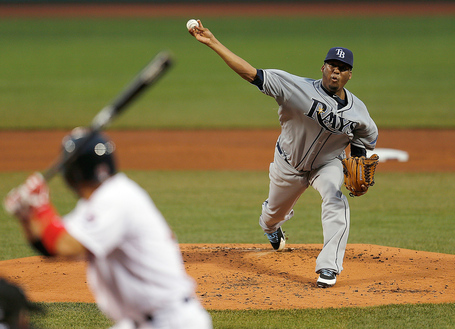 There seems to be one too many pitchers in the rotation for the Rays to continue at a normal pace for their starters. Perhaps one of them should be skipped entirely.

When Alex Cobb returns from injury, there will be one too many starters in the rotation as it is now, and someone will have to go. Making that transition now may prove advantageous for the Rays. The team could move one of their starters to a bullpen role now without demoting anyone from the 25-man rotation, giving the Rays a trial run to see how effective that pitcher would be.

(It should be noted that while nothing has been officially announced, Marc Topkin has already shared on twitter his understanding that Price would be the one to start on Monday back in Fenway, which would instigate the above schedule.)

You might notice that there are two gaps in the schedule when you "skip" Roberto's start. It's likely that it would be Hernandez the one to pitch on Tuesday, July 30, on six days rest. That would be another start on extended rest (disaster for sinkers), but it serves the need while keeping the rest of the rotation on a normal schedule. But what about the other day?

In the midst of all this, Cobb remains the presumed fifth starter, and he is still rehabbing in the minors. His remarkably quick recovery from that line-drive induced concussion has been set back by a blister on his right index finger. In theory, he could take it easy and work his way back into form for that gap on Saturday August 17 without feeling rushed.

If Cobb is not ready to return by that point, the Rays could always return to using Roberto Hernandez. 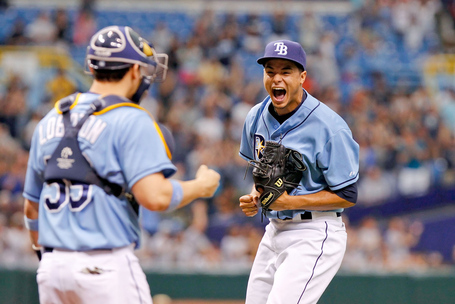 Perhaps you're of the ilk that Roberto should stay in the rotation, and Chris Archer would be better suited for a relief role. Archer is not a guaranteed innings eater, and he could giving the Rays some high leverage relief late in the season as a rookie (following in the foot steps of Price and Moore, I might add).

If that were the case, here's what the coming schedule would look like pitching Price on Monday, Hernandez on six days rest on Tuesday, and then moving Archer to the bullpen.

This method produces 11 starts on normal days rest, as opposed to eight when Hernandez was removed from the rotation, and still creates an opening for Cobb or the removed pitcher (Archer) to slot back into a starting role on August 17th.

As I mentioned above, moving Archer likely adds another high leverage arm to the bullpen, and allows Hernandez to continue his work of eating innings -- both great ways to rest the bullpen arms we have -- but this doesn't come without its own risks.

Hernandez is not as effective as Archer projects to be in a starting role, which leads to more runs allowed and possibly more difficult games, and there's worry that removing Archer from the starting rotation may hamper his development in some way.

Perhaps the question simply comes down to who you would rather have start for three or four of the upcoming starts in the next month: Archer or Hernandez. And if one of the two falter in their role as a starter or relief pitcher, it would presumably be a simple transition to swap their roles and try it the other way around.

Either way, the hope is that instigating a four man rotation now will pave the way for Cobb's return, and give the Rays an opportunity to test the newly transitioned arm in the pen without losing any players from the 25-man roster.

Whether you think that should be Archer or Hernandez, the four man rotation should prove useful over the next three weeks.

Roger Mooney reports that Joe Maddon is considering a four man rotation for the coming schedule over the next three weeks, including who it would be:

"We've discussed different things," Maddon said before today's game with the Yankees. "We haven't put it all together. Of course we all have our different thoughts and our different schedules. We'll announce that relatively soon. It's possible to do something like that, yes, but we're still trying to put it together."

Mooney also reports that Maddon has not set any plans should Cobb be available to return earlier than anticipated (read: during the four man rotation).

"It would add a degree of difficulty for what we're trying to do," Maddon said. "But of course we want to get Cobber back. It's a nice problem, we want to keep that problem, always want to have that problem. So we still have a little more time to figure that out, and we're going to use that time."