Matt Moore pitched his first complete game of his career in his last start in Fenway Park, with the goal of doing it again today. He reminisced on the feeling of being able to shake the catcher's hand at the end of the game to his longing to do so as a kid, watching Roy Halliday, John Smoltz, and James Shields do so many times. He loved it, and he wanted to do it again.

Luke Scott was back in the line up today, returned from a sore back and batting second against Phil Hughes. He pushed one foul into the second deck in his first at bat. Also back in this game, batting second for his team, was Derek Jeter. He went yard on the first pitch, high and outside, above the strike zone. It was a lazy fly ball that just carried until it tucked over the wall.

Escobar then held and booted two ground balls to put runners on the corners. A towering fly ball to mid-center allowed a runner to score, and Brian Anderson complained on the broadcast that he would've liked to see Matt Joyce come over from left and give a try and throwing home, given his arm. Jennings's attempt made it to the mound by the time Cano scored.

A wild pitch moved the runner to first, and Ichiro hit a single to mid-center. Jennings caught in on one hop, charging, but his throw was not in time again. Yanks end the first inning with a 3-0 lead, and Moore with a pitch count of 23.

With Loney on first base off a single into right field, Myers hit a shot up the third base line. Brent Lillibridge made a sliding backhanded grab to stop the ball, turned, popped up on his feet, and fired to second to get the out. It was a heads up reaction by Loney to slide aggressively and stop the double play.

Joyce then laid a perfect bunt for a single, and Johnson (who was reading Hughes's pitches rather well) knocked a run in with a double bouncing in the right field corner. With two runners in scoring position and one out, Lobaton was called out looking on a strike that was a bit outside even for John Hirschbeck (almost 40-year veteran with a reputation for calling strikes outside).

Escobar walked to load the bases, but Jennings flew out to center on a 2-0 count, easy 93 MPH fastball in the wheel house, leaving the Rays with one run in the frame.

This frame was a calmer outing for Moore than the previous inning, 1-2-3 with all three outs caught by infielders. Escobar redeemed himself defensively with an over the shoulder catch of a would-be blooper to left-center for the first out.

Longoria slapped a one-out single up the middle to extend his hitting streak to ten games, and Loney singled opposite field to put two runners on for Wil Myers (start nodding, Rays fans).

Wil the Thrill worked a full count before launching a 3-run homer to left field -- a no doubter into left field off hanging breaking ball by. And yes, there was a bat flip.

Phil Hughes worked two stikes on Matt Joyce before nailing him inside his back foot. Kelly Johnson singled him over to third for runners on the corners, and the Yankees fans started booing Hughes.

Hirschbeck gave some more gifts to Phil Hughes vLHH on the outer portion of the strikezone, notably to get Lobaton looking again. Through three innings, Hughes has nine strikes and no balls called outside or away to left handed hitters. Moore had no strikes and three balls called. 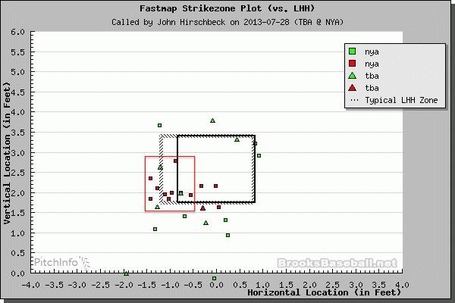 Jeter was credited with a lead off single with a liner that bounced off Johnson's glove as he reached above his head on a casual run. Moore was then called for a balk to move Jeter into scoring position after jittering his right leg before starting his throwing motion.

Alfonso Soriano then hit one to the outfield wall in right, which Myers tracked through his leap. The ball edged just over his glove to give New York another lead, 5-4. 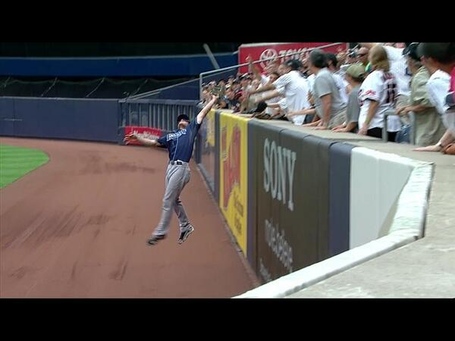 Hughes returned for the fourth, despite New York's active bullpen. He allowed one hit to Longoria (his first multi-hit game since July 2nd) without much ado.

Moore had another baserunner off a ground rule double by Gardner and wild pitch that let him advance, but he stopped the Yanks there.

Yes, Hughes returned for the fifth, with some great results for the Rays. Wil Myers promptly homered on the first pitch:

With the score even at five apiece, Myers was all grins, slapping two-hand fives in the dugout. Hughes followed the at bat by walking Joyce, and he left the field to a chorus of boos. The Rays left the score there, 5-5.

Moore got his first called strike outside the zone to a left handed hitter to get Cano after an 0-2 count, Moore's third strike out of the game. He then got Soriano and Wells on ground outs, with the latter ground ball caught himself -- between the legs with his rear pointed toward home plate.

After a 1-2-3 inning from Tampa Bay's top of the order,Alex Torres and his 0.30 ERA took the mound to hold the score steady. Ichiro led with a full count base hit on nine pitches, his third single of the game. He got the next three batters over fifteen pitches.

A Gardner basket catch in left center and a Lillibridge diving stop prevented hits by Loney and Myers to lead the seventh. It was enough excitement to kill the wave at Yankee Stadium, so good job Thrill.Sean Rodriguez then pinch hit for Joyce and his chopper was picked up by Cano and the throw just beat him to first; another 1-2-3.

Joel Peralta finally got his turn in the bottom frame. It'd been a while.

Facing the top of the order, Peralta got Gardner swinging, Jeter to ground out softly to Escobar (who made a nice throw on a double clutch), and then incurred the first walk of the game for Rays pitching. The walk was to Cano, and again he was unkind to a Rays pitch vLHH.

Alfonso Soriano followed with a tapper to the left side that just edged past Escobar for a single, and Lyle Overbay came in as the pinch hitter. During the at bat, there were two weird observations: about five or so pigeons landed on the field, and Overbay had to step out of the box to wipe sweat from his brow. Classic case of Ornithophobia, no?

Overbay struck out looking, and the game remained tied.

The excellent David Robertson took over in the eighth, working easy outs with a K of Kelly Johnson and a fly out by Lobaton, before Escobar was able to hit a low grounder past Cano. Desmond Jennings then fell to a brutal strikeout looking on a pitch called a ball in the same at bat.

I'm not blaming the umpire, I'm just telling you he sucks.

Suzuki led the bottom with a 2-2 single, giving him a four-hit afternoon. Lillibridge moved the runner on a sac bunt, Longoria charged a grounder with a strong throw to get Adams at first, and then McGee overpowered the catcher Chris Stewart with high heat, getting him swinging at 97 MPH.

With the game still locked up at 5-5, the Yanks wisely turned to Mariano Rivera in a non-save situation to face Scott, Longoria, and Loney.

Scott took two pitches outside for strikes (surprise), two balls outside (oh, legitimate surprise!), and then Cano made another great throw on a full sprint to get Scott on a bouncer up the middle. During the at bat Scott had to call time due to a pigeon flying between home plate and the mound while he was waiting for a pitch, and Cano scared atleast on bird away on his throw.

McGee returned to face the top of the order, despite 18 pitches in the eighth. He walked Brett Gardner on eighth pitches, including three fouls, before bringing up Derek Jeter. Sometime during that Gardner at bat, McGee acutally broke his belt and had to ask for a new one before facing the Yankees captain.

To start the at bat, Jeter leaned in for a bunt and got in Lobaton's way on a fastball hard inside. The pitch was dubbed wild by the scorers, and Gardner advanced to second. With the runner moved, the Rays opted to intentionally walk Jeter to reach lefty Robinson Cano.

McGee went 96 low and inside for strike one, got a fouled pitch high at 97, and then blew it past Cano at 98 low and outside. He didn't even need Hirschbeck's help, the was inside the zone, and Cano didn't lift his bat.

Two on, one out, and a groundball likely turns the double play.

Joe Maddon had Jamey Wright warm in the pen, but he kept McGee in at 33 pitches. The southpaw put the pitch low and below the zone for Alfonso Soriano, but the groundball went up the middle, scoring Gardner easily for the Yankees walk-off win.

- In case you can't tell yet, I would have gone with Wright in that match up. McGee was spent after some battles won and loss over the last six batters, and your groundball specialist is warm. It even would have given a righty-vs-righty match up. Why not make the switch?

- With that loss, the Rays slipped back to 0.5 games behind Boston. They'll have a chance to reclaim that lead with their final appearance of the season in Fenway tomorrow, a one game series making up for the rained out match up on Thursday. We'll have David Price on the mound.

- Hideki Matsui retired in a Yankee jersey before today's matinee, with a nice pre-game ceremony of video highlights, a contract signing to bring him back to New York, a jersey presentation, and a first pitch with his family. Matsui last played in the majors for the Rays.

- Jeter's first pitch HR was only Moore's ninth home run allowed. The Yankees were the only team to have not hit a home run since the All-Star break, and it was the first right handed home run in 28 games for New York. Moore had not allowed a home run since June 9th (48.1 IP).

- Myers now leads all rookies with 7 home runs and 26 RBI, so that's cool.

- Myers is also the first opposing rookie to homer twice in Yankee Stadium since Reid Brignac in 2010. Other players to do so include Mark McGwire, Ken Griffey Jr., and Manny Ramirez. (via @RaysBaseball)

- Zobrist received an off day today after fouling a pitch off his right foot yesterday. Hopefully we'll have him back in action at Fenway Park tomorrow.