They say all good things must come to an end. The adage held true for the Tampa Bay Rays, Wednesday, as their 24-inning scoreless streak and four game winning stretch both met their demise at the hand of two loud Chris Carter home run balls.

Some baseball games are more exciting than others, but Wednesday's game was mostly a sleepy affair for Rays fans. After taking the first two games of this four game set with the Astros a combined 20-0, many expected the fireworks to last through the holiday and there was a glimmer of hope that the offensive deluge would continue for the Rays as they jumped out to a 1-0 lead in the first inning.

Desmond Jennings, back atop the lineup against a right-hander, singled to left on a line drive off the shortstops glove. Matt Joyce followed with a single of his own on a ground ball to right field and the Rays quickly had runners on the corners against Houston starter Bud Norris. The man named for a beer would wiggle off the hook however, surrendering just a sacrifice fly from Ben Zobrist. The failure to tack on any more would prove costly as Norris settled in quickly and the Rays offense went suddenly silent.

Norris, by far the best pitcher on a much maligned Astros staff, would not allow another run, scattering 6 hits over seven innings of one run baseball. The Rays had chances early and were exploiting the run game in the first couple of innings but three untimely double plays coupled with the inability to get a hit with a runner in scoring position would keep the recently potent offense from breaking out. The Rays also hit a number of loud, long flyballs on the night that repeatedly found gloves at the warning tracks.

Meanwhile, The Astros finally found a way to score a run against Rays pitching that had shut them out for two straight games. That way: Chris Carter, who single-handedly drove in all four runs on the evening. Carter launched the first of two home runs in the second inning, a solo shot off Roberto Hernandez that tied the game at one a piece. The home run ended a 24-inning scoreless streak for Rays pitching that tied a club record.

Hernandez pitched well, allowing just two hits through the first six innings but got into trouble with no outs in the seventh inning as Brett Wallace doubled and Jason Castro singled to open the inning. Joe Maddon turned to fireman Jake McGee to get the Rays out of the jam but Carter worked a 3-2 count before obliterating a baseball deep into the heart of Texas, a three run blast to the train tracks that gave the Astros a 4-1 lead in the bottom of the seventh inning. The tough-luck outing for Hernandez has become commonplace as he has received just six runs of support over his last four outings while pitching pretty effectively.

Evan Longoria, working his way back from plantar fasciitis in his right foot, finished the game 0-4 with three strikeouts and Wil Myers failed to reach base going 0-4 with one strikeout of his own.

Compounding issues for the Rays, the trio of Boston, Baltimore and New York all won and gained ground on the Rays in the American League East, with the Yankees leapfrogging Tampa Bay into third place and the Rays falling back to fourth. The Rays will get another crack at the Astros tomorrow at 2:10 as Chris Archer opposes Jordan Lyles.

Until then, we will just have to take solace in this wonderful image... 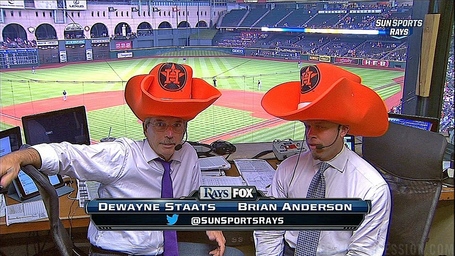