Rays retake the division lead, and best record in the American League, thanks to a stellar effort by David Price.

There's only one place to begin this recap. You know where.

After a 38-minute rain delay and the Rays clinging to a 2-1 lead, David Price re-took the mound having thrown just 82 pitches. He fell behind 3-0 to Jonny Gomes, but proceeded to strike him out on eight pitches. Then, in a strange move, Joe Maddon pulled Price in favor of Joel Peralta. I'm not going to question Maddon's motives as many others did -- Price is his best pitcher and if he thinks he sees something he doesn't like I have no issue with the decision. It does seem odd, though, that he'd let Price come back out at all if the hook was going to be that quick.

The move looked to backfire as Peralta gave up back to back doubles to Ryan Lavarnway and Stephen Drew. Each ball could have been played better; Sam Fuld didn't play the carom off the Green Monster properly and Wil Myers should have caught Drew's hit to right. Luckily for the Rays, pinch runner Daniel Nava made a terrible baserunning blunder by not scoring from second on Drew's double. He stranded himself in no man's land while the ball was in the air, dancing between second and third. Peralta then got Brandon Snyder to fly out to left fielder Sam Fuld, who charged the ball and threw a one hopper to Jose Molina at home. Then this happened 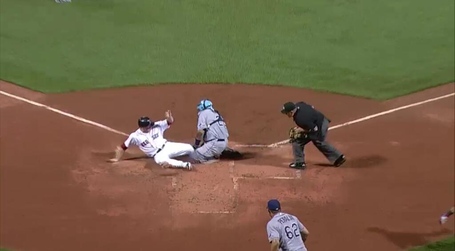 Out. Or so says home plate umpire Jerry Meals. He's in terrible position to make this call, but ruled in the Rays favor, allowing Peralta to escape. Replays show Nava was clearly safe and a critical break finally seemed to go in the Rays' favor.

The ninth inning was virtually just as hairy, with Jacoby Ellsbury at second base representing the tying run. With two outs and first base open the Rays intentionally walked David Ortiz, putting the winning run on base, which is usually never a good strategy. A wild pitch from Fernando Rodney allowed the runners to advance, moving the winning run into scoring position. Luckily for the Rays, Rodney struck Mike Napoli out on seven pitches, finishing him off with his first changeup of the at bat.

All of the late inning heroics overshadowed the outstanding performance of David Price. Had there not been a rain delay there's a good chance Price would have thrown another complete game, which would have been his fourth in seven starts since coming off the disabled list. He allowed just two hits and once again failed to walk a batter. The lone run came on a 302 ft homerun to "right field" by Chris Snyder, glancing off Pesky's Pole. It's certainly the only stadium where that ball isn't either caught or out of play. In the span of a week he's limited the highest scoring team in baseball to two runs in 16.1 innings, without walking a soul.

The game wouldn't have been so dramatic if the Rays' offense could have helped out their ace. They ended up with 23 men left on base thanks to a combination of double plays and strikeouts. Only Yunel Escobar, Sean Rodriguez, and Jose Molina left fewer than three men stranded.

With the victory the Rays finished the road trip 8-2, come home in first place with the most wins in baseball.