The Rays offense did its part, battering Ian Kennedy and scoring five runs.

Roberto Hernandez will not go onto the shelf quietly. The upcoming schedule may be weird, Alex Cobb may be about to return, and Chris Archer may be more talented than either of them, but don't call Roberto Hernandez an experiment. Call him a pitcher. I found his postgame interview with Todd Kalas mostly unintelligible, except for one phrase, repeated several times: "Keep the ball down."

That's exactly what Hernandez did, and he was rewarded with a complete game. 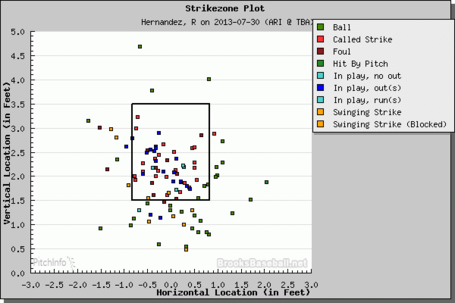 Just look at that cluster at the bottom of the zone. Hernandez gave up only five hits and one walk, while striking out six. His balls in play consisted (by my count) of 16 ground balls, five fly balls (one an infield popup), and three line drives. The only runs he gave up came from an Eric Chavez home run in the bottom of the ninth inning, in what was essentially mopup time.

Through seven, he had only struck out two Diamondback batters, but in the eighth inning, Roberto Hernandez struck out the side. The inning showed just how thin the line is between a dominating groundball outing and a Kanes Furniture pizza coupon. In the inning, Hernandez alternated sinkers and changeups at the bottom of the zone, and mixed in changeups below the zone once he got ahead. When he can locate like that, hitters have an unsavory choice. His changeup is enough of a weapon that hitters will want to stay out of two strike counts. In a pitcher's count, Hernandez can put people away. But swings at sinkers near the bottom of the zone mean lots of easy ground balls for the Rays defense, and an efficient game for Hernandez. For much of the night, the Arizona hitters chose to be aggressive. The eighth inning showed why.

Ian Kennedy was not nearly as sharp as Hernandez, and the Rays offense came out strong in the bottom of the first inning. After swinging under a few elevated fastballs, Desmond Jennings was able to square up a changeup near the top of the zone for a sharp liner into left-cetner field. For almost everyone it would have been a single, but Jennings thought double the whole way and used his speed to get into scoring position. One pitch later, Ben Zobrist lined an RBI single into right field to open the tally. Evan Longoria replaced Zobrist on the basepaths with a fielder's choice, and then came home when James Loney hit a high fly ball to the wall just in front of the Rays' tank. A good throw and a good relay nearly nabbed Longo at the plate, but his slide got his feet over the plate before Wil Nieves's tag caught his body.

There was a thunderstorm in the area, clearly audible through the broadcast. In the middle of the second inning, a lighting strike knocked out power and delayed the game for 20 minutes. Say what you will about the stadium. Just be glad we have a dome.

When the game resumed, it was clear that Ian Kennedy was hanging on by a thread, and getting significant help from his defense. Zobrist lined out hard to center field with two outs and two men on to end the second. To lead off the third inning, Longoria hit a high fly ball to the wall in straightaway center, but Adam Eaton made the leaping grab against the wall. It was the second time a ball looked to be a home run, but was held by Tropicana the pitchers' park (Loney's drive to the Rays' tank was the first). Then, with two outs in the inning, Luke Scott smoked a line drive to right field, but Gerardo Parra took the right angle and made a running backhand grab to steal an extra base hit and prevent a run.

Yunel Escobar was able to end the streak of warning track power when he grabbed hold of a grooved fastball in the fourth inning and powered it for an opposite field home run to extend the score to 3-0.

Ian Kennedy deserves credit for leaning on his changeup and getting out of the fifth inning with a couple strikeouts, but he was replaced to start the sixth by Will Harris. Matt Joyce, due up first, worked a walk, and then the Rays went to work with some small ball. Joyce went in motion, and Aaron Hill, the second baseman, followed him to receive the throw. But Jose Molina slapped a grounder the other way, right where Hill had been, for a single, and Joyce continued on to third base with no outs. Yunel Escobar hit a fly ball into right field just deep enough to bring Joyce home for the fourth run of the game.