The Rays Tank: James Loney is Heating Up

Share All sharing options for: The Rays Tank: James Loney is Heating Up

James Loney was on fire to start the 2013 season, with an April batting average of .373. He cooled off a bit during May and June, hitting .306 and .282, respectively. Now, Loney finds himself in the midst of a 15-game hitting streak, which ties his career high. Things are heating up.

Just how hot has Loney been? 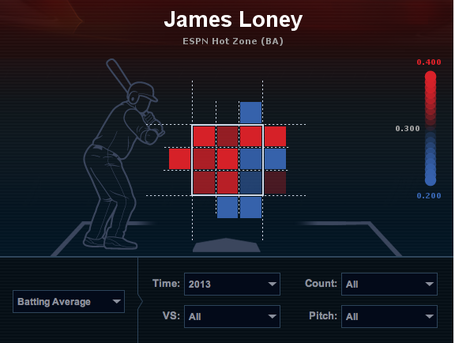 Per Baseball-Reference, Loney currently boasts a 1.9 oWAR in 85 games (bWAR - defense). His career high is a 2.1 oWAR in 2007 with the Dodgers, a season where he only played in 96 games. Moving forward, we could see a career year out of our first baseman.

Prior to yesterday’s game, Loney ranked first around the league in batting average on the road at .371, according to the Rays pre-game notes. Then he went 1-4 with a walk in yesterday’s game. You can read an in-depth recap of yesterday’s 7-5 victory here.

As we begin a ten-game homestand, we can only hope that James’s hot streak will continue, and push his .267 batting average at home much higher. It'd be nice of him to bring those hot hitting ways back to the Trop.

Glenn Sattell wrote about the Rays upcoming homestand for MLB.com. He noted how these next ten games against sub-.500 level teams could provide quite a run for Tampa Bay going into the All-Star break. Fan voting for the All-Star game ended at midnight last night and the All-Star selection show will be broadcast tomorrow at 6:30 PM on FOX.

The Rays will send Jeremy Hellickson to the mound tonight against Dylan Axelrod and the Chicago White Sox tonight. Hellickson is coming off of a hot June in which he went 5-1 and really settled down after his messy start to the season.

- Ryan Roberts is one of the top-ten worst basestealers in the league, as shown by Carson Cistulli of FanGraphs.

- Bill Petti of FanGraphs takes a look at pitcher’s velocity decline trends in June. He also discusses how Matt Moore’s biggest issue this season has been giving up walks.

- Hardball Talk focused on how the Rays are keeping Longo in the lineup as a DH while he deals with the plantar fasciitis issues. I’m very interested to see where he’ll play now that we’re back at the Trop for ten games.

- Joe Smith of the Tampa Bay Times takes a look at Desmond Jennings and the leadoff spot.

- Multiple celebrations took place across the league yesterday for Independence Day, including a new song debut from Neil Diamond.

- Mark Fernandez, Rays Senior VP, was named one of the 10 Leading Men of 2013 by Blu Tampa Bay Magazine.