Jeremy Hellickson's strong outing and an offensive surge led to the Rays 8-3 victory over the White Sox last night.

The Rays defeated the White Sox 8-3 last night as Jeremy Hellickson carried his outstanding pitching performances from June into July. The offense racked up fourteen total hits and we saw Jose Molina and Kelly Johnson go back-to-back to score the first three runs of the game. With the exception of Sean Rodriguez’s pinch-hit strikeout, everyone in the Rays lineup had at least one hit.

Jeremy looked pretty impressive again last night. His final line was seven innings pitched allowing only one earned run and six hits, while striking out nine (tying his season high) and not walking any batters.

Hellickson threw 100 total pitches, 70 were for strikes with 13 whiffs. His pitches consisted mainly of fastballs (57) and changeups (35). Per Baseball-Reference, his game score of 70 was only the fourth time this season that he has reached a game score of 70 or above. 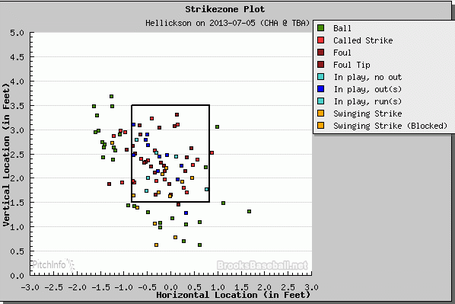 Jeremy also improved his record at home to 5-1 on the season, while his record on the road sits at 3-2. His WHIP of 1.161 in ten games at home is also a bit better than his WHIP of 1.268 while on the road, per Baseball-Reference. Hellickson has also allowed the same amount of earned runs, 29, in both his ten starts at home and eight on the road.

Good news about Alex Cobb! He threw his first bullpen session from the mound yesterday which is a major step forward in his rehab. According to Bill Chastain and Sam Strong of MLB.com, "Cobb acknowledged that he doesn't think he's ‘extremely close’ to his return, but he added: ‘We're moving a lot faster than we expected.’" http://mlb.mlb.com/news/article.jsp?ymd=20130705&content_id=52780266&notebook_id=52790442&vkey=notebook_tb&c_id=tb

-David Schoenfield of ESPN’s The Sweet Spot takes a look at the Rays best deadline deal ever as part of their reoccurring "30 deals in 30 days" series.

-The week’s best gifs courtesy of Cut4! I’m liking the Cardinals high five and the Dan Haren throw to the base.

-Matt Klaassen of Fangraphs takes a look at the decline of Justin Verlander.

-The Cubs are looking to deal Matt Garza, but where will he end up?

-LOL- After Blue Jays' analysts Dirk Hayhurst and Gregg Zaun apparently discussed J.P. Arencibia and the team's recent struggles, Arencibia fired back, calling out Zaun for PED usage and Hayhurst for not having much MLB experience.