Checking in on the FreeZo All-Stars

Who are some of the top performers in the organization that don't get much recognition?

Share All sharing options for: Checking in on the FreeZo All-Stars

Late last night, I had no idea what I was going to write for this slot. I usually know what I'm doing at the latest by Monday afternoon, but I just didn't have it this week. I threw it to the staff here for suggestions and got a couple. One is a trade deadline piece that I may come back to soon, and the other was this. He may have been joking when he suggested this, but there's nothing wrong with highlighting some of the more unheralded players in the organization.

I'll start with Yates because of a great comment FreeZo made yesterday:

That's pretty impressive company except for Ramirez, and even he was able to make over 100 ML appearances with two teams. I expanded his query to extend to the Pacific Coast League too going back to 2006 and came up with these names:

This is still really good company to be in. Bulger was a former first round pick and even though he could never throw strikes, he still made 125 career appearances. Wuertz had some good years when healthy, the same goes for Motte, Scherzer's recent developments speak for themselves, and Hill... will always have the first couple years of his career.

Yates doesn't have a great profile as a short right-handed pitcher, but despite his smaller stature, his fastball velocity sits in the 92-94 MPH range, and he was able to get outs in his second Arizona Fall League stint last off-season. In prior seasons, he tended to walk too many batters, but his walk rate is down to a more manageable 8.7% this year. He's limiting right-handed batters to a .365 OPS this year, and pitchers who can pitch with that kind of success get opportunities even if they don't fit the usual profiles teams look for. 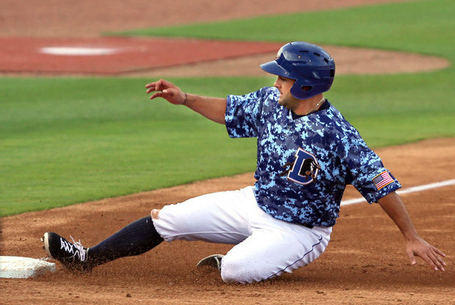 The Rays acquired Belnome in the off-season for minor league reliever Chris Rearick, and it seems to be paying off. Belnome is second in the International League in wOBA (among players with more than 300 plate appearances), second in OPS and has the third best walk rate. His .168 ISO is better than average. He plays first, second and third base, and no one seems to believe that he can play either of the latter two or he'd probably be in the majors already.

They've given chances to similar players in the past though, some of which were pretty brief: Stephen Vogt, Russ Canzler and even first basemen like Dan Johnson or Brandon Allen. The play of James Loney has mitigated the need for just anyone to come up and cover first base, but Vogt and Canzler are pretty analogous to me since they could at least attempt to play other positions. Statistically, Belnome has both of them beat.

Of course it's not all about statistics. Vogt is way behind offensively, but he could catch a little. Canzler played every corner position during his 2011 International League MVP season. Both Vogt and Canzler have been limited to cups of coffee in the majors so far, but they did at least get that chance to play in the majors. Belnome has hit pretty well his entire career, and it seems like he'll get his chance at some point, even if it's brief. 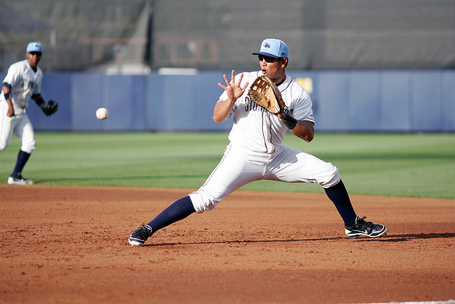 Segovia was a revelation with Bowling Green last year, posting the sixth highest wOBA in the Midwest League among hitters with more than 250 plate appearances and tied for ninth in the league in home runs despite having many fewer plate appearances compared to the other leaders. He did all of this from behind the plate, and all things considered, was one of the more valuable performers in the organization last year.

This year, his production has hardly tailed off. His walk rate is a bit down but still good, his strikeout rate is identical, his BABIP is only eight points higher, but the only difference is his power was down a bit. His ISO was .257 last year and is now .218. That's still very good, especially for a catcher, but the problem is he's not catching anymore. He's on a roster that has had four different players go behind the plate for them: Jake DePew, Curt Casali, Luke Bailey and Ryan McChesney when there were some injuries. The organization invested a lot in Bailey and will give him every opportunity to develop, and Casali was a Detroit top 30 prospect before he was traded to the Rays. With all of these catchers, it doesn't seem like the organization has prioritized Segovia's defensive development and would be catching if they felt he had a future doing so.