This is an article that I've put off for a few days, that I've started and stopped a few times. Waiver claims are a curious thing, and even very logical choices for teams to take a turn at trading for (Adam Dunn, Justin Morneau, Jimmy Rollins, Michael Young) have cleared without a claim. These valuable assets can now be traded anywhere, but the lack of a claim shows at least your own team's intentions, and is telling of the market in general.

There have been trades. The Royals just nabbed Jamey Carroll and Emilio Bonifacio. The Rangers traded for Alex Rios and Travis Blackley. Mark Reynolds cleared waivers, was released, and his post-April .177 batting average is now in the Bronx. Even the normally quiet Rays claimed and traded for Wesley Wright's wicked change up.

Now, Marc Topkin reported there's been mutual interest and conversations between Delmon Young and the Tampa Bay front office, saying, "The Rays could use another right-handed bat." There's two very intriguing statements: one is the need for a right handed bat, the other would be our old friend Delmon. Let's dive in.

Do the Rays actually need another right-handed bat, as Topkin suggests?

If the Rays are going to do any roster shuffling, at least one hitter will have to go.

A few notes before we look at who's not succeeding vLHP:

- I will ignore the catching position, because that can't be helped. No decent catchers are available.

- Ryan Roberts is not on this list, because he has already been demoted to make room for Alex Cobb on the roster.

- The bottom three hitters on this table are the ones to be benched against left handed pitching.

A few of these numbers can be tempered:

- Sam Fuld is leading the board, but the left handed hitter has career numbers of .323 wOBA and 104 wRC+, good for third to last on this list. His sample size is not large enough to suggest some massive improvement, so in the mean time he stays under consideration.

- Contrariwise, Ben Zobrist is a switch hitter whose career shows greater success against southpaws, with a .351 wOBA and 121 wRC+, and in 2012 those numbers were .374 and 143 respectively. He's better than this.

- Matt Joyce should not play against left handed pitchers. He's racked up 314 plate appearances since 2008, and that wRC+ sits at 68; however, he's incredibly useful against righties with a .363 wOBA and 131 wRC+. He stays.

- Sean Rodriguez is almost solely useful against southpaws, though his career is a slightly better .332 wOBA and 111 wRC+. Under career number circumstances, that's still not enough to make the starting line up using this list, but his defensive flexibility to play every single damn position keeps him around.

- Kelly Johnson and Luke Scott both hit from the left side of the plate and are having somewhat anomaly years against same handed pitching, but that's hard to argue with.

- Just a reminder: Only three players on this list have options remaining: Sean Rodriguez, Desmond Jennings, and Wil Myers.

Now let's look at who could be added. 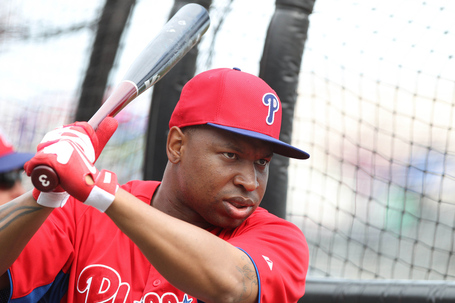 Delmon Young won the ALCS MVP last season for Detroit, he's an old Rays draft pick, and he's clutch and the Rays should go get heeeeem.

Delmon Young was the number 1 draft pick by the Tampa Bay Devil Rays in 2003, was traded to the Twins by Andrew Friedman for MVB (Jason Bartlett) and Matt Garza, and never developed into the baseball player he was expected to be.

Moreover, Delmon has a history of left mashing, with a .351 wOBA and 117 wRC+ on his career vs southpaws, which his 2012 campaign was much more in line with. He'd be owed a prorated portion of the league minimum for the rest of the season, which is as cheap as it gets. 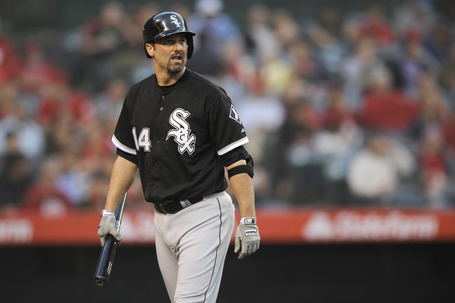 Would you believe me if I told you Paulie was sporting a negative WAR? Fangraphs has him mapped at -1.5, and a below average BAbip of .261 has brought his wOBA down eight-hundred basis points to .292 with a 78 wRC+. All in all, that's a dramatic way of saying he's at a career low for a full season's worth of play.

Konerko's HR/FB% has plummeted nearly ten percent this season, he's 37 and battling back ailments, and his average flyball distance is ranked in the bottom 10% of the league. He'll be a free agent at the end of the season, and it might be time for Konerko to call it a career as a starting first baseman. This isn't winning ugly, it's just ugly.

All of that said, the man is still hitting left handed pitching. He's just not that slugger he was.

Konerko would be owed a bit more than Delmon, needing the prorated portion of his $13.5M contract, and a trade piece sent to the White Sox. 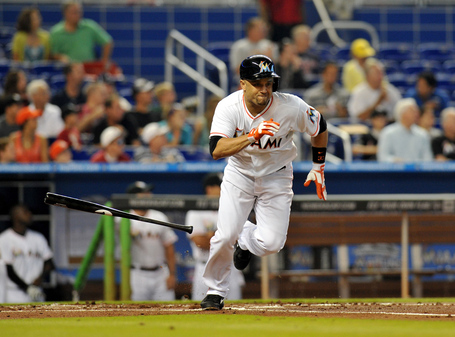 More of an interesting case study in hitter development, Polanco is a right handed bat that has only shown splits that favor hitting against southpaws in 2011 and 2013. Three of the five most recent seasons show backward splits, and any farther back brings up neutral splits. But he's a right handed infielder, so he makes the list.

The 37-year old infielder would come cheap, with the prorated portion of $2.75 M, and the Rays have a history of dealing with the Marlins, but Tampa Bay would be looking for a bat. And in the regard, Polanco doesn't add up. 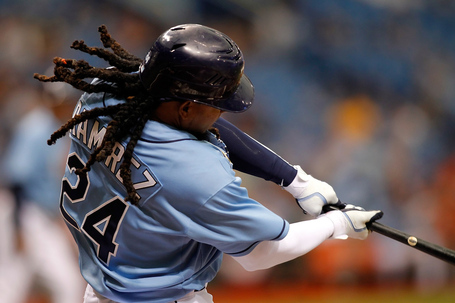 Here's another free agent. Manny was the savior of Taiwanese baseball playing for the EDA Rhinos, bailed for the United States, and then was cut by the injury plagued Rangers before making the major league roster. Ouch.

Of course, he was a Rays player for a brief time, batting poorly for a few games before getting busted for HGH use. He had taken a massive pay cut down to $2M to join his friend Johnny Damon and fit into the Rays budget constraints.

Considering past drama and a lack of real statistics to show his current performance, Manny is an unlikely move. He played in 30 games for Triple-A Round Rock before he was cut, batting .259 with three home runs and 13 RBIs. According to reports, the 41-year old is training in Miami and waiting for a major league team to call.

If that doesn't have you convinced the Rays should pass, Manny hasn't posted a better split against opposite-handed pitching since 2007.

Before we look at the numbers again, I've removed the players most obvious to stay in the starting line up (Longoria, Myers, Escobar, Loney, and Jennings), bring these four candidates into the fold, add Ryan Roberts for a bit of perspective, and change the numbers for Fuld and Zobrist to their career averages vLHP.

After the five players removed, two catchers are already a given, so we're looking for six players to round out the offense portion of the 25-man roster (three for the lineup, three for the bench).

I'm also going to take one further liberty: Following will be the stats against LHP and RHP, but I've cleared out the data for any player with a wRC+ below 100.

If you'd like to fill the remaining slots with three bats vRHP and three vLHP, there's an easy decision to keep Ben Zobrist, Matt Joyce, and then Kelly Johnson and Luke Scott, both of whom are profiling well against southpaws.

The only players out there who have exceeded their performance vLHP are the recently demoted Ryan Roberts (who is defensively lacking in comparison to Sean Rodriguez), and Paul Konerko (no defense left in the tank). Choosing either of these players for the roster, however, will bump either Sam Fuld or S-Rod from the 25-man.

While it's true that Delmon Young's current and career numbers on offense against left handed pitching are superior to Rodriguez and Fuld, the defensive flexibility of either will likely continue to outweigh the temporary added value of Young's bat.

Meanwhile, Fuld is still swinging a hot bat, and once the roster expands for the playoff push, Roberts will be back in the fold and this point will even be weaker.

Other considerations: Bringing in either Konerko or Young now would necessitate burning Rodriguez's option, which is currently unused on the season, Konerko would require some kind of trade expense, and any move would require another move on the crowded 40-man roster.

Konerko is tempting, it's fun to think about Young, but my wager is the Rays won't be bringing on anyone new.

Who else is eligible?

You might have noticed we haven't talked about a lot of hitters. The players who have cleared waivers and are eligible to be traded elsewhere are simply not appealing.

There's a slew of guys whose splits play well against righties (Michael Young, Jimmy Rollins, Adam Dunn, Justin Morneau, Brendan Ryan) and one who shows no true split at all (Elvis Andrus). Most of these players would also cost a pretty penny to trade for as well.

Most free agents are also unappealing. Infielders Tyler Greene and Jason Bartlett are available, but don't have the bat to support cutting a player on the 25- and 40- man rosters.

Unless another injury opens up a spot on the 25-man roster, the Rays stay put.

If an injury opens up a slot before rosters expand, go for Konerko.

If three injuries occur, Brandon Guyer should be off the disabled list soon enough.