Share All sharing options for: What's wrong with Jeremy Hellickson?

Jeremy Hellickson matched his career low for innings pitched yesterday afternoon, 2.2 IP with five earned runs. On first glance, Hellboy's had a rough season, spotting an ERA above 5.00. His trend of beating out FIP to record ridiculously low ERA's has come to an end; on the other hand, that FIP is at a career low (4.11).

Hellickson has been posting favorable numbers for a flyball pitcher. His in-field fly rate has risen to 11.3% this season, and his home-run rates have stabilized to his career average (10.3% HR/FB) after last season's outlier, but his in-play batting average is out of control, with a .312 BAbip (compared to his career avg of .263).

Men are also scoring more often than usual against Hellickson, with his LOB-rate stuck below 67% when his career average prior to this season was around 82%. Furthermore -- in significant career bests -- the strikeouts are up (17.9%), he walks are down (6.5%), and Hellboy is on track to post the highest WAR of his career. Without yesterday's poor outing, Hellickson would probably have surpassed his 1.6 WAR from 2011, his Rookie of the Year season.

Hellickson is much, much better than this.

Note: Craig Goldstein made similar observations in his Five to Watch article this morning.

Jeremy Hellickson was not having a horrible season in the first half of the year. He was credited with eight wins, three losses, and seven no decisions leading into the All-Star break, pitching at least six innings in 13 of his 18 starts, and allowing more than four runs in six starts. He struck out 97 and walked a mere 26 batters in 117.2 innings. All good stuff.

Then there was a ten-day break for the All-Star festivities, and when Hellickson returned to action, the velocity took a little jump: 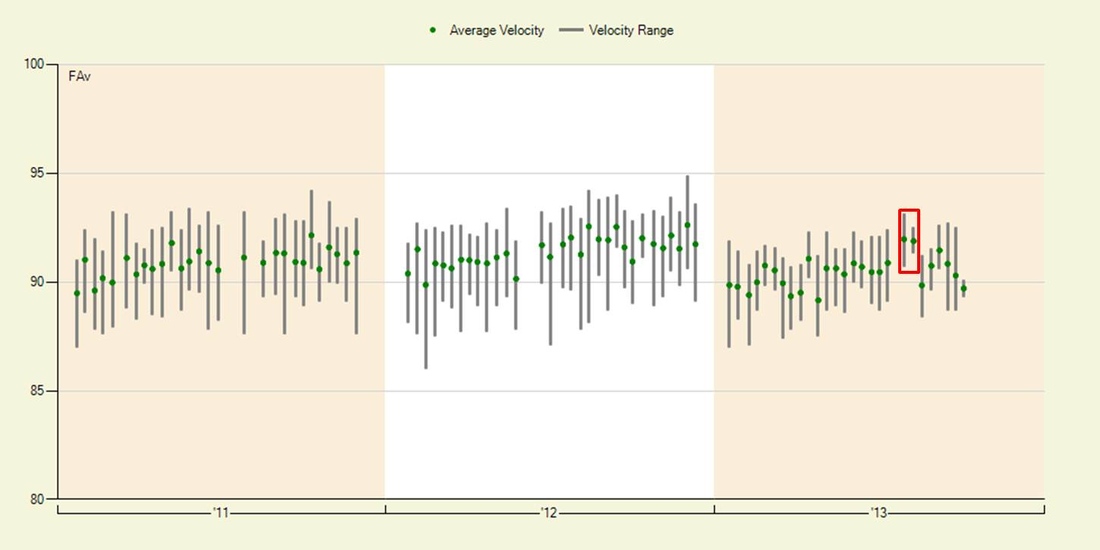 Once I saw that deviation, I went looking for confirmation that something had gone wrong, and that Hellickson had pushed himself too hard and then injured his arm, or got tired in some way. For reference, let's start the game before the anomaly: 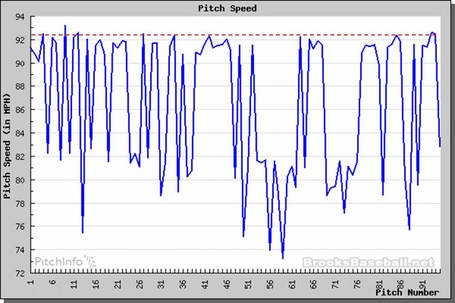 This graph is reflective of Hellickson's entire season up to this point. After sporting a heater that danced around 95 MPH in 2012, his fastball velocity had dipped heading into this season, and had yet to recover. This is natural for pitchers as they age, and is not a problem if the player can adjust. 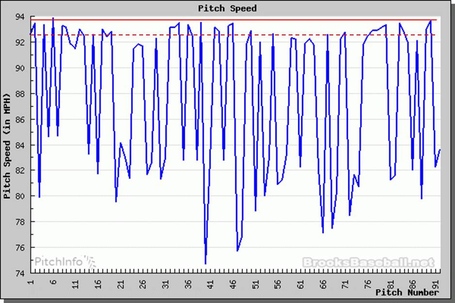 Here we see Jeremy harnessed the rest from the All-Star Break and came out slinging. A marginal improvement, but a significant increase. 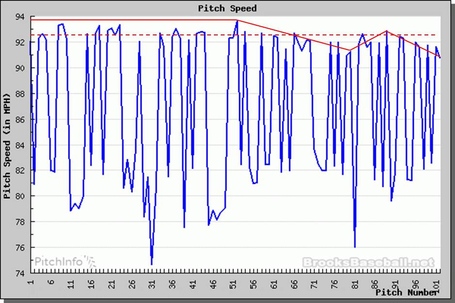 Jeremy attempted to maintain his jump in velocity, but something went wrong. The solid line marking the top velocity follows four points, two highs and two lows, and shows a possible negative trend for a pitcher who is usually consistent throughout a game.

The turning point was pitch 51 in a game against the New York Yankees. Guarding a 5-0 lead, Hellickson had allowed a run and then walked the bases loaded by throwing a full count pitch in the dirt to Robinson Cano. He followed on pitch 50 with a fastball, but it was another ball. Here, Hellickson made a conscious decision to ramp up the velocity to blow the next pitch by Alfonso Soriano. It worked, strike one, 94 MPH on the gun.

There was no grimace. There was no change in expression. There was nothing visually apparent to indicate an injury. But he immediately trimmed the velocity and wouldn't get back near the 94 mark again. 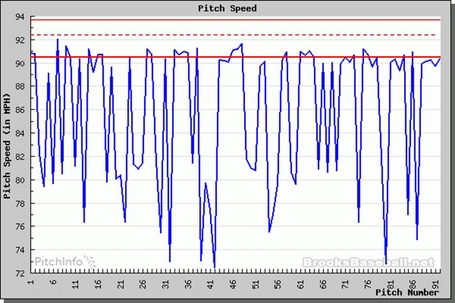 From pitch 51 of July 26th forward, the velocity would not return. After six starts, he pitched less than five innings in five games, with his final start lasting less than three, as mentioned above. His fastball lacked action, and his secondary pitches lacked movement. The Royals were hitting everything, and Hellboy was lacking in his command.

Hellickson had a problem. Anyone watching him pitch could see he was tired. Diving into the numbers, maybe something shows. It's subtle, but there's smoke. The hope is there's not a fire.

So the Rays made a move this afternoon to provide him rest: optioning him to Class-A affiliate Port Charlotte. Hellickson will not pitch while he is on the roster, but the move allows the team to call up other relievers until the September 1 expansion date.

Hellickson is expected to return to the team after he has skipped a start in the rotation and gained possibly a few extra days of rest.

Per Marc Topkin, the Rays are adamant that Hellickson does not have an injury. Time and rest should show if that is true.