The Rays Tank: Rodney, Jennings blow save; Odorizzi up

Share All sharing options for: The Rays Tank: Rodney, Jennings blow save; Odorizzi up

I don't really want to talk about yesterday. I muted my TV entering the ninth, because I'm terribly removed from the culture and someone was trying to explain to me what "twerking" is, and when I returned to the game, this (Dan's recap) had happened. Altogether a difficult evening, it was worse, since the Red Sox defeated the Orioles 13-2. You can read about that game in what is likely the best recap of the season (sorry, Dan).

There's a bit of hope, if you choose to see the promotion of young pitchers who have performed well in triple-A but struggled through limited appearances in the majors as hope.

Odorizzi to #rays, will start Thursday. Matt Moore will start for @DurhamBulls Thursday in Gwinnett. Luke Scott there Weds to rehab.

Before the game, yesterday, Kelly Johnson and Derek Shelton held a hitting class on the field, and 50 fans (read: kids) got to attend through Franklin Sports' 30th anniversary LEARN FROM A PRO promotion.

During the one-hour event, Johnson and Shelton demonstrated hitting techniques and drills, and spent some time answering questions. Each of the participants were then invited to attend Tuesday night's game.

Here's a pic sent out way by Franklin Sports: 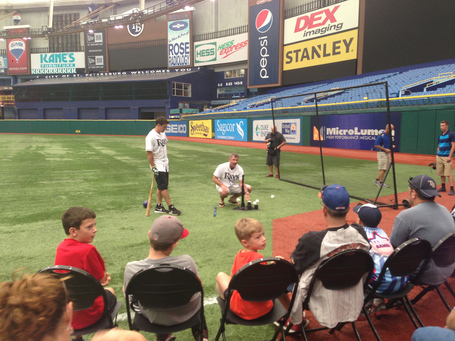 The clinic was one of 18 held around the bigs, and it still sounded like a fun event.

The Hardball Times notes the AL East ain't what it used to be.

In news from the division, Robinson Cano was hit in the hand by a pitch yesterday, although X-Rays were negative. He believes he'll be able to return by Friday.

The Royals made two Rays related moves, signing Carlos Pena, and moving Wade Davis back to the 'pen.

Matt Harvey, like a true Met, is injured. Jeff Moore responds to the usual water cooler topics surrounding the news.

Dave Cameron is changing the name of RE24 to Context Batting Runs. I'm not a fan of context-dependent batting metrics. I think it's pretty well established that they add nothing to our understanding of a player. Still, there's not a whole lot else worth talking about, so . . . what do you think about RE24?