Toward a better understanding of pitch efficiency

Or, why David Price is better than Justin Verlander.

Share All sharing options for: Toward a better understanding of pitch efficiency

David Price has been pitching efficiently. Since he came back from the disabled list in early July, he's thrown three complete games, and also completed nine innings in a game that went ten. He was great last year. Now he's great, but in a different way. In addition to being great to watch, Price is causing us Rays fans to think about pitching. In light of his newfound economy, I'm kicking off a series on what makes a pitcher efficient.

First off, it's not about pitches per plate appearance. That tells you something about a pitcher, but it doesn't tell you how likely he is to finish a game. The game ends when one team makes 27 outs, so what we're really looking for is pitches per out. Using the FanGraphs leaderboards, I've calculated pitches per out for every qualified starter. I've defined an "out" as every batter who doesn't get a hit, get walked, or get hit by a pitch. I know I'm ignoring errors, but I think that's okay. Here are the top and bottom of the list.

The first thing you'll notice about the list is that, Justin Verlander aside, the efficient pitchers are on the whole much better than the inefficient pitchers. They don't just eat innings, they win games for their team.

The second thing that you'll notice, is that being efficient is not about strikeouts. Many of those top guys strike people out at a high rate. Two of them, Bronson Arroyo and Bartolo Colon, do not. Strikeout percentage is not the deciding factor. Here is the graph of K% vs. pitches per out for all qualified starters. 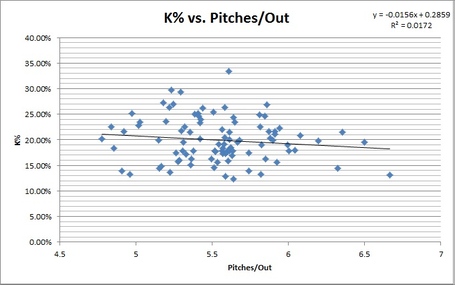 The third thing you will notice is that it walk percentage is important. 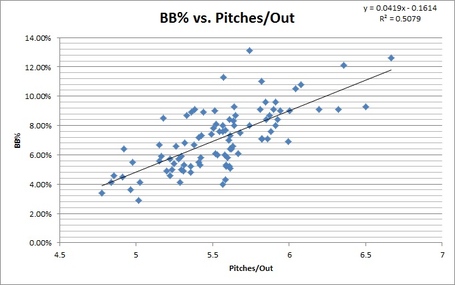 David Price is the most efficient pitcher in the majors, and he also has the second lowest walk rate. That is not a coincidence.

I ran the correlations for a number of other stats. In the coming weeks we'll dig into all of them a bit more, but let me leave you with the Rs. Keep in mind that a negative is an inverse correlation (as one goes up, the other goes down), one is a complete correlation, and zero is no correlation.

Enjoy, discuss, and let's circle back after the next David Price complete game.